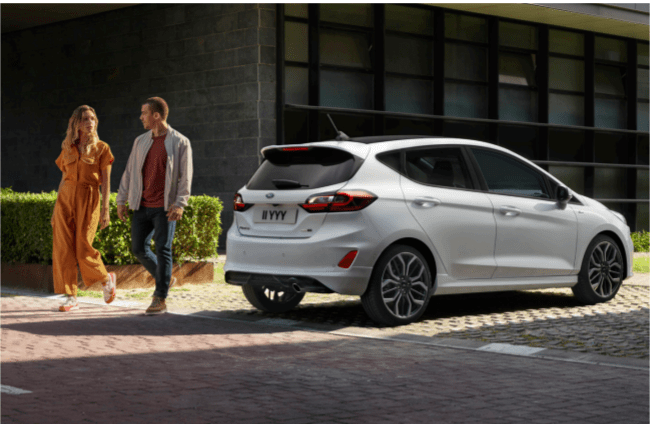 Unfortunately, while testing the Ford’s new Fiesta mHEV, I had to get my mum to a certain South Dublin private hospital’s emergency room before it closed at 6pm. This plucky little Fiesta rose to the challenge of becoming a makeshift ambulance and proved, as the Fiesta has time and again, that it isn’t the size of the dog in the fight, it’s the size of the fight in the dog.

Having fallen in love with the Fiesta mHEV’s hardcore cousin, the full fat, 200hp Fiesta ST, two years ago, I was sceptical about this ‘mild hybrid’ Fiesta, but boy was I pleasantly surprised. My test car was a five-door ST-Line, with a 1.0-litre turbocharged engine, pushing 125hp through a rather sweet six-speed manual gearbox.

Utilising the new mild hybrid system, this Fiesta was fun to drive in a way that many supposed sporty cars would dream of. It was powerful, responsive, and accelerated smoothly throughout the gear range. It was a handsome little so-and-so, painted in metallic black with 17” alloy wheels and slightly tinted rear windows, for that sleek, black-on-black look. It also boasted some nice ST-Line body panels, such as the grille and spoiler.

Available in 125hp or 155hp, this turbocharged, mHEV Fiesta features a belt-driven integrated starter/generator (BISG) in place of the standard alternator, enabling recovery and storage of energy usually lost during braking and coasting, to charge a 48-volt lithium-ion air-cooled battery pack.

The BISG also acts as a motor, integrating with the engine and using the stored energy to provide torque assistance during normal driving and acceleration, as well as running the vehicle’s electrical ancillaries. Finally, this clever system also shuts down one of the engine’s cylinders, when it detects it’s not needed, to enhance fuel efficiency and save the planet.

According to Mr Roelant de Waard, Vice-President, Marketing, Sales and Service at Ford of Europe: “Adding EcoBoost Hybrid technology to Fiesta’s best-inclass driving dynamics means customers can have even more power and still go further on a tank of fuel.” The Fiesta is festooned with tech, like FordPass Connect, which allows the driver to unlock their doors, start the car, locate the vehicle and check on the fuel level, alarm status, tyre pressures and oil life, through the FordConnect app, on their smartphone.

My test car also had adaptive cruise control, which the driver can now use in stop start traffic, as well as motorway driving, and a terrific Fiesta SYNC 3 infotainment system with Android Auto and Apple CarPlay. Also available are park assist, cross traffic alert, with active braking and a phenomenal B&O sound system with a subwoofer built into the wheel arch.

The four-door Fiesta is a perfect example of less is more. I packed up the boot with shopping on three occasions, as well as bags, boxes, and four adult humans, and despite what the crossover SUV propaganda would tell you, nothing went wrong, it was perfectly fine. So, do you really need a small SUV for your family of three when a good hatchback will do the job? I don’t think so.

The entry-level Fiesta costs €18,949, but I don’t believe in promoting entry-level cars, as they’re usually lacking. My test car, the ST-Line, 1.0-litre, 125hp, EcoBoost-Hybrid starts at €23,947. However, once you add the optional extras that price rises to €25,015. That’s not bad at all, in a world where people spend €45k on a Nissan Qashqai. I can’t recommend this little bargain enough, especially if you’re looking for a family car that doesn’t feel cheap and
won’t let you down in an emergency.