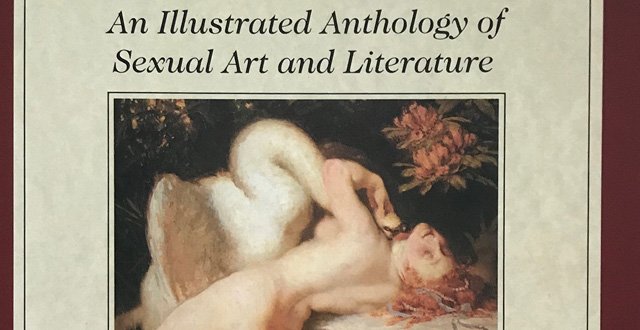 recently visited a friend whose Edinburgh street hosts a free library comprising two small shelves of books, protected by a wooden door, bolted to railings. Anyone can borrow or donate books, and I felt like browsing. Both shelves were crammed with paperbacks, and the previous donor had wedged their hardback into the cupboard, supported only by the closed door. When I opened it, <em>An Illustrated Anthology of Erotica </em>(Little, Brown and Co, 1992) fell into my arms.

On the cover, directly beneath a large-font ‘EROTICA’, was Heinrich Lossow’s painting of <em>Leda and the Swan</em>. Leda hadn’t gone to the riverbank to feed the ducks; that was clear. So too was the fact that I hadn’t heard the approaching footsteps of an elderly gentleman of military bearing. His look of disdain as I spun around — affording him the chance to register ‘EROTICA’ above the recumbent Leda in my trembling hands — was withering, and I scurried off, unwilling to wrestle the troublesome anthology back into place.

“Mmm,” was my wife’s unenthusiastic response to this true account, and ‘mmm’ is my unenthusiastic response to this anthology; the visual equivalent of a symphony played on one note. Having plunged in, as it were, to emerge with my eyes duly boggled, I turned to the foreword, which quotes the German art collector Eduard Fuchs (1870-1940), who claimed that “eroticism lies at the root of all human life”. Really? In that case, I can’t help feeling how dull I am.

But despite the absurdity of blank-eyed purveyors of customised — even ‘custardised’ — sex, pornography is no joke. For example, in Raymond Cleaveland’s <em>Pornography and Priestly Vocations</em> (www.catholicculture.org/culture/library/view.cfm?recnum=6182), his tale of porn-drenched priests includes the observation: “Like never before in the 2,000-year history of the Roman Catholic Church, the young men called to the priesthood today have been immersed in a pornographic world from the day of their birth.” Unsurprising perhaps, since as Shakespeare’s character Angelo demonstrates in <em>Measure for Measure</em>, nothing corrupts like virtue.

And if, as Fuchs notes above, eroticism does lie at the root of all human life, then there’s the risk of courting a sexually-transmitted disease, especially among those who cavort on computer screens. For instance, when Hill et al considered ‘Condom use and prevalence of sexually-transmitted infection (STI) among performers in the adult entertainment industry’, their results, published in the <em>International Journal of Sexually Transmitted-Diseases and AIDS</em> (2009, 20: 809–810), showed that men who had sex with men (MSM) reported higher rates of condom use “than either women or heterosexual men (25 per cent, versus 0 per cent, versus 7 per cent, respectively)”. There was a high prevalence of STIs among the study group, who had attended the STI clinic over 400 times. Thus, eight MSM had a total of 123 STIs, 14 heterosexual men had 135 STIs, and 15 heterosexual women had 22 STIs.

Given examples such as these, let us leave aside the question of the morality and ask whether pornography is a public health problem, as the US state of Utah declared in 2016. Perhaps the Utah state legislators had read Dr Mary S Calderone’s ‘Pornography as a public health problem’ in the <em>American Journal of Public Health</em> (March 1972, 374-376). Calderone complained that our capacity to judge when the expression of eroticism is appropriate “is so poorly developed in such a large proportion of individuals that the term ‘pornography’ begins to be applied with faulty judgment — one might almost say — promiscuously”.

But when it comes to determining what is eroticism and what is pornography, who, asks Calderone, “is to arbitrate and adjudicate the question, and on what basis?”

The answer appeared to be public health physicians. Dr Calderone, incidentally, was the Executive Director of the Sexuality Information and Education Council of the United States, which she founded in 1964.

Which dovetails into Prof Irving Zola’s essay <em>Healthism and Disabling Medicalisation</em>, where he cites Dr P Henderson’s 1971 address to the British School Health Service Group. Henderson called for school health workers’ involvement in a series of “health problems”. Zola cites 10, including maladjustment, juvenile delinquency, children in care and maladjustment. “One wonders,” asks Zola, “who or what is left out?” Pornography, I suggest.

He warns that bureaucracies are notorious in their wish to expand: “So, true to form, the public health authorities have broadened their mandate and kept ongoing.” And it seems to me that the exclusion of a pornography subtype of hypersexual disorder from the <em>DSM-5</em> was probably a close-run thing.