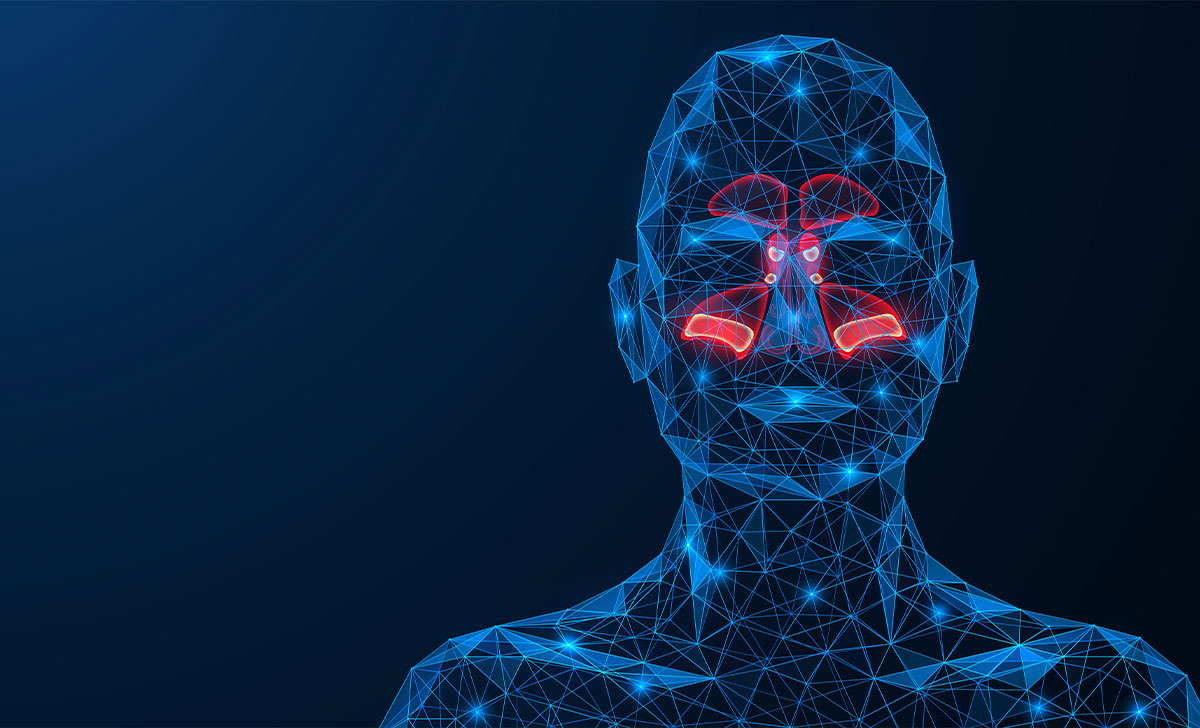 The burden of allergic rhinitis can be significant, but there is much that can be done to help address the symptoms.

Allergic rhinitis (AR) is a common condition with a global impact. In Ireland, at least one-in-five people suffer with AR.1 The economic impact is striking. The European Union recently estimated that the indirect cost of undertreated AR on work productivity may cost between €30-50 billion per year.2

The symptoms of AR are often considered to be trivial and as such AR is underdiagnosed and undertreated. However, the burden of this disease is significant with a reduced quality-of-life for these individuals. It has been shown to affect cognitive and psychomotor function and patients describe the impact on sleep as considerably debilitating.

While struggling with AR symptoms, the ability to participate in social and sporting activities is reduced and missed days at work are a feature.

In addition, AR has a worrying impact on a child’s education. Missed or unproductive days at school are common. This becomes particularly apparent during hay fever season, which coincides with exam time. A UK study of teenagers found that there was a reduction in exam performance for those with seasonal AR compared with other times of the year.3 This is most relevant for Leaving Certificate students and those in university.

It is estimated that AR affects at least 400 million people worldwide and the prevalence within Europe is between 17-and-29 per cent.1 The UK has a prevalence of 26 per cent1 and Ireland is likely to be similar to this.

A 15-year-old boy is brought to our clinic by his mother in July, referred by his GP. He has had significant allergic rhinitis symptoms since early childhood. The symptoms are mainly present from May to August.

His main symptoms include rhinorrhoea, sneezing, nasal congestion associated with pruritis to his nose, palate, and occasionally his arms and legs. He also experiences features of allergic conjunctivitis with itchy, watery eyes and swelling intermittently.

He has recently been experiencing asthma and eczema flare-ups on high pollen count days.

His symptoms are preventing him from sleeping. In addition, he has just completed his Junior Certificate exams. His ability to concentrate and study was hindered and his exam performance was reduced compared to his mock exams.

His parents are very concerned about his Leaving Certificate exams in three years. He is a motivated student with ambitions to attend university. He has been taking multiple antihistamines daily, which he thinks might be contributing to his fatigue. He is also using an intranasal corticosteroid.

The boy appeared tired with dark rings under his eyes. He was visibly mouth breathing.

Flexible nasoendoscopy confirmed rhinitis with significantly oedematous turbinates bilaterally. There was increased mucus and visible mucosal pallor. There were no polyps and no septal deviation. Chest and eye examination was normal.

Skin prick testing was performed, which confirmed a strong sensitisation to grass pollen.

Allergen avoidance measures were discussed and daily saline irrigation of the nasal cavity advised. Given the severity of the symptoms, a short course of topical intranasal corticosteroid drops (Betamethasone) was used followed by the commencement of a combination intranasal corticosteroid and antihistamine spray. Topical mast-cell stabiliser (sodium cromoglycate) eye drops were advised. His symptoms improved and at a review in August he was almost symptom free.

The following year he was commenced on a similar plan from early April. However, on review in early June his symptoms were persistent. A trial of a leukotriene receptor antagonist was commenced, which significantly improved symptom control.

Following the pollen season, he was commenced on sub-lingual grass pollen immunotherapy and tolerated it well. He continued to take immunotherapy daily and the April prior to his exams he recommenced the medication plan as before. His exams went well and he remained asymptomatic throughout. He will continue to take immunotherapy to complete a three-year treatment plan.

As a result, it is expected that he will require less medications to control his allergic rhinitis in the future.

The cause for this rising prevalence is unclear, although risk factors may include overuse of antibiotics, exposure to air pollution, maternal/passive smoking, and climatic factors among other theories.6

Certainly, environmental exposures are key to understanding the rising prevalence of allergies. The ‘hygiene hypothesis’ was proposed as an explanation whereby the more sterile Western lifestyle was reducing infections and resulting in less type 1 immune responses. More recently, there is a better insight into the development of allergen tolerance with the microbiome during early life being an essential component. Antibiotic use will disrupt this, among other environmental factors. Exposure to irritants such as cigarette smoke and air pollution, particularly diesel exhaust fumes, has been shown to contribute to and exacerbate AR.

In addition, global warming is seen to be playing a role in Ireland, with milder weather resulting in prolongation of pollen and spore seasons. This is confounded by the introduction of new pollens such as ragweed, which would usually be a common allergen in North America and continental Europe.

Nevertheless, AR appears to be the consequence of environmental exposures in those with a genetic vulnerability. Indeed, genetic predisposition or atopy accounts for at least 50 per cent of AR cases,7 and genetic studies have demonstrated that multiple susceptible loci can contribute to AR alone.8

Multimorbid AR is whereby AR and asthma or atopic dermatitis co-exist. Interestingly, a differing variety of genetically susceptible loci are attributable to multimorbid AR, for example, IL-5 and IL-33 for those with AR and asthma.8

AR is a risk factor for asthma. In fact 90 per cent of asthmatics have AR and 30- to-40 per cent of those with AR have asthma.9 A ‘united airways’ disease approach to management is the more favoured approach in recent years. Moreover, the treatment of nasal inflammation in asthmatics has been shown to improve outcomes. This highlights the importance of assessing for both asthma and rhinitis in these patients.

AR is an IgE-mediated inflammatory reaction following exposure to an allergen. This results in inflammation of the nasal lining and/or conjunctiva. The symptoms characteristically include rhinorrhoea, nasal obstruction, sneezing, and nasal itching.

Additionally, symptoms will often include an itchy palate and irritated, watery itchy eyes with associated periocular oedema or dark rings under the eyes (allergic shiners).

Patients can experience fatigue, snoring, mouth breathing due to nasal obstruction, and a feeling of heaviness in the head or a ‘fuzzy’ head. If the sinuses are affected the patient may experience sinus pressure, headaches, and a post-nasal drip. Compression of the olfactory nerve due to oedema within the nasal cavity can result in an altered sense of smell and/or taste.

There are two phases which are paramount to the development of an allergy. Phase one occurs when an atopic individual is first exposed to the allergen. The allergen is taken up by antigen-presenting cells, particularly dendritic cells (DC), and is processed into peptide fragments. The DC will move through the lymphatics towards the lymph node where it will present this peptide fragment to a naïve T-cell.

The naïve T-cell becomes activated to express cytokines, particularly IL-4, which drives the differentiation of these cells to Th2 helper cells. An environment rich in cytokines IL-4 and IL-13 is created and is responsible for inducing IgE production from B-cells. Additionally, IL-5 is responsible for eosinophil recruitment and activation. The cytokine profile is vital as it determines a Th2 immune response.

Allergen-specific IgE will attach to mast cells and basophils. This is referred to as primary sensitisation. In addition, memory B-cells are generated and a small number of memory T-cells remain.

Phase two occurs on subsequent exposure to this allergen. The allergen binds to the sensitised mast cells, triggering degranulation of the mast cell; releasing pre-stored and newly synthesised inflammatory mediators such as histamine, leukotrienes, and prostaglandins. These contribute to vascular permeability, eosinophil infiltration, and increased mucus production.

Furthermore, with repetitive allergen exposure, nasal priming occurs. This appears to cause an accumulation of effector cells in the nasal mucosa and results in a hyper-responsiveness to the allergen and prolongation of symptoms. In addition, there appears to be a neural component to this hyper-responsiveness. Changes to the sensory nerves of the nose have been demonstrated in those with AR. In addition, innate immune responses can be initiated in the nasal epithelium by allergens directly compromising the epithelium and resulting in the release of alarmins such as IL-33, further activating the inflammatory response.

AR can be divided into seasonal and perennial based on allergen triggers. Seasonal rhinitis includes sensitisation to grass, tree, or weed pollen, and fungal spores. Whereas perennial rhinitis is commonly triggered by house dust mite or animal dander. This classification system is effective at giving a likely diagnosis of the trigger, which assists with recommending appropriate avoidance measures.

However, a new classification system focusing on the functional ability of the patient, including the frequency and severity of symptoms, has become a much more effective tool for making treatment decisions (Figure 3). This guideline was developed by Allergic Rhinitis and the Impact on Asthma (ARIA) in collaboration with the World Health Organisation (WHO).9

The diagnosis of AR is generally based on clinical symptoms. However, skin-prick allergy testing or specific IgE blood testing can be used to confirm the allergen trigger.

In addition, it is vital to examine the nose whereby you will often see bulky oedematous turbinates with visible increased mucus production (Images 3 and 4). Pallor of the mucosal lining is often present, particularly in long-standing cases. Occasionally, the mucosa will lose its smooth appearance and instead will have ridges and pitting from chronic allergic challenge. Pre-polypoid tissue can occasionally be present.

Allergen avoidance should be discussed. Nevertheless, avoidance alone is generally not sufficient to manage symptoms. In cases where the allergen trigger is animal dander, avoidance is effective if the animal is removed from the home.

Saline irrigation is an effective way to directly cleanse the nasal cavity with the resultant reduction of mucus, inflammatory mediators, and bacterial burden. It has also been shown to improve mucociliary function.

In patients with mild intermittent symptoms an antihistamine is often effective. Second-generation antihistamines are recommended as they carry less cholinergic and sedating side-effects. Oral or nasal decongestants can be used as a rescue medication, but for no longer than five days to avoid rebound symptoms.

Eye symptoms can be managed conservatively with cold compresses and tear supplements. However, if these symptoms persist, it is advisable to consider oral and topical antihistamines, topical mast cell stabilisers (sodium cromoglicate), or decongestants. Topical corticosteroids should ideally be prescribed under the care of an ophthalmologist.

If there is evidence of lower airway irritability or asthma, a leukotriene receptor antagonist can be trialled. In severe cases, short courses of oral corticosteroids are occasionally required.

Immunotherapy has been shown to significantly reduce symptoms and medication requirements and is recommended by the ARIA guideline. Additionally, the Global Initiative for Asthma (GINA) 2020 guideline recommends that immunotherapy be considered for asthmatics sensitised to dust mite.11 Immunotherapy involves exposing a patient to minute quantities of the allergen trigger, allowing the immune system to build up a tolerance. It is essentially like a vaccination. It can be given as a subcutaneous injection or as a sublingual tablet. Sublingual therapy is used predominantly in Ireland and is currently available for grass pollen, dust mite, and tree pollen. Compliance is crucial and regular follow-up advised. It is usually a three-year process whereby the patient takes it daily. It is highly effective and well-tolerated.

Phototherapy is well-established for skin conditions and is now being used within the nasal cavity to manage AR. It uses UVA (25 per cent), UVB (<5 per cent), and visible light (70 per cent) to induce a local immunosuppressive effect by inhibiting allergen-induced histamine release from mast cells and inducing apoptosis of T-lymphocytes and eosinophils. It essentially desensitises the nasal cavity, thus reducing symptoms. It is particularly useful when pharmacological treatment is insufficient or contraindicated.