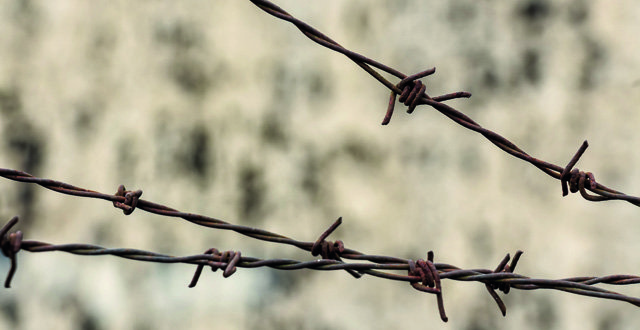 Close-up of corroded barbed wire on blurred old brick wall. International Day of Commemoration in Memory of the Victims of the Holocaust. Amnesty concept.

Health professionals, including doctors, can often be the target of violence and abuse. David Lynch reports on a motion at the recent IMO AGM on the issue and speaks to doctors about why the HSE needs to improve the process of dealing with violent incidents

IMO delegates unanimously passed a motion on violence and abuse towards medical staff at the Organisation’s recent AGM in Killarney, Co Kerry. The motion called on the HSE to “designate a national officer to be responsible for the administration of protocol and the maintenance of a national register of such incidents”.

The motion, brought forward by the union’s NCHD committee, further urged the Executive to “provide care pathways for violent and/or abusive patients to be treated in primary care, secondary care and community settings.  Such pathways must adequately protect healthcare workers, other staff and patients from harm.”

A HSE spokesperson told the Medical Independent (MI) that the Executive does have a  “Head of National Health and Safety Function within the HSE Workplace Health and Wellbeing Unit, National HR Directorate, which includes assaults”. However, when asked whether there are plans to provide a national register for incidents, or a nationally co-ordinated care pathway for abusive  patients, the Executive spokesperson did not return with a response by the time we went to print.

The issue of violence towards medical staff has been in the news recently, with MI exclusively reporting last month that violent incidents in the University of Limerick (UL) Hospitals Group increased by 97 per cent over a three-year period (see sidebar). According to the figures, which were released following a Freedom of Information request, 139 violent incidents took place in 2016. The number increased to 191 incidents in 2017, and 236 in 2018, meaning 566 incidents took place over the period.

Also in this issue, we reveal that over 125,000 hours of ‘close supervision’ of violent and/or aggressive patients were required at University Hospital Galway (UHG) last year, according to new data.

Close supervision by security personnel is required when a patient is considered by staff to be a danger to themselves, other patients or staff by being “aggressive or violent”.

An average of 43 security officers per day were allocated to close supervision services in UHG alone in 2018.

MI spoke to two NCHD committee members at the AGM about the pressures faced by staff and the need for HSE action.

“Thankfully, I have been involved in only one such event when a patient had injured themselves under the influence and had to be sedated because they were under the influence,” NCHD committee Chair and trainee in emergency medicine Dr Paddy Hillery told MI.

“They were troublesome verbally throughout the night in the department, and then when a nurse tried to assist, another patient near them were swung at. The patient was then warned that he cannot be violent to others. He said that he didn’t care, and then proceeded to swing at another member of staff — myself. Thankfully, he did not make contact and there was no physical injury. But there was no reprimand to this patient… there were no consequences.”

“This is all around people trying to carry out their duties. This would not be acceptable in any other [working] area.”

Dr Hillery added that “violence should not be accepted.”

“I am not saying anyone should be barred from getting care; that is not what I’m saying at all,” he added.

“But there should be a social contract… nobody is saying that anyone who has dementia, or [a] psychotic episode due to psychological problems or an acute psychosis due to a medical illnesses [should be denied care].  These are exceptional cases; they are assessed by medical clinicians as a medical condition. Where people are just tired or annoyed, or people are intoxicated — these are not acceptable reasons to be verbally or physically abusive to staff.”

His fellow committee member Dr Sarah Barry, a final-year GP trainee in the midlands, proposed the motion at the AGM. She told MI that “simply, everyone has the right to a safe place at work. There should be something standardised across the country so people are safe in their workplace”.

“There are also healthcare assistants, there are porters, there is security; there are different allied healthcare professionals that can be affected by this. If there were safe staffing levels in some of these facilities, it would not be as much of an issue. But if you have people boarding in an emergency department (ED) with a long wait and you are already on a skeleton [staff], that’s a risk. We are fortunate, looking at the US [hospital system]; in contrast, for example, we have stricter gun laws. But in the US, a lot of the violence actually involves firearms; there are fatalities.”

On the proposal for the HSE to appoint a designated official to deal with such incidents, she said “there are so many variations of different processes throughout different hospitals, and people rotate. If there was a single person and a single process standardised throughout, it would be an awful lot easier”.

Dr Hillery agreed that a centralised system would improve the variations and ad hoc nature of the current systems across the country.

“There should be a national record kept and centralised so that we have proper information, but also that there is an appropriate designated person and if these instances happen, people know where they need to contact  as opposed to going to their line manager, who may not have more information,” said Dr Hillery.

“We need someone who has experienced the area and it is their dedicated role to look at this, as opposed to someone who is doing this as an adjunct to their current work.

“The HSE is a large organisation. Unfortunately, these instances are not isolated to one particular area; they are spread throughout the Irish system. As such,  having a centralised person whose responsibility it is can take the pressure off the local areas and make sure this is dealt with appropriately, instead of being left to the individuals affected by the situation.”

Echoing Dr Barry’s comments, Dr Hillery said it was not only medical staff who are facing this challenge.

“This has been seen on the floor from people working in departments, not only by emergency medical staff, but also by administration staff, especially in emergency departments, which unfortunately are busy,” he said.

“Most of the brunt is taken by our secretarial colleagues who are at the frontline with people checking in to the emergency department… unfortunately, sometimes people have to wait and it’s the secretary at the front desk who is getting cursed at and abused, not necessarily even by the patient, but by friends who are with them or family members.”

Speaking during the general motions debate at the IMO AGM, new IMO President Dr Padraig McGarry made a “point of information” on this issue.

“As part of the negotiations between the Department of Health and the IMO in regards to the reversal of FEMPI, that very issue is being addressed in relation to abusive patients. Hopefully we will have something to report on that, particularly in a primary care setting into the future.”

In an interview with this newspaper at the AGM, Mr Val Moran, Director of Industrial Relations, General Practice, Public and Community Health, provided more detail on this area. Mr Moran said under the agreement between the union and the Department, a working group will be established to develop a scheme for violent and/or abusive patients.

“The idea behind this is that you do have a small number of patients who can be violent or abusive. We have GPs who have been attacked and beaten in many cases,” Mr Moran said.

“We want to have a system similar to what they have in the NHS, where actually you can put such patients on. Obviously, everybody has a right to healthcare and you have to balance these competing rights to any scheme.”

Last month, this newspaper carried a lead story about the increasing  number of violent incidents occuring in the University of Limerick (UL) Hospitals Group.

In response last week, a spokesperson for the UL Hospitals Group told MI  that it “takes all incidents of assault and aggression on any party very seriously.  We recognise the need for specific and specialised support for staff who may encounter situations which may have a traumatic effect on their personal and professional life.

“We ensure that recording, reporting and reviewing mechanisms in relation to incidents of work-related aggression and violence are understood and actioned, as per the HSE policy on management of work-related aggression and violence. Our management keep records of incidents including review/investigations, conclusions reached, actions identified as being required, the person responsible for actions and the time frames for implementation.

“Training is made available to all staff by UL Hospitals Group, including how to manage challenging or aggressive behaviour in the workplace. The Employee Assistance Programme (EAP) provides formal structured support to employees who have experienced stress reactions as a result of a critical incident in the workplace. EAP is a confidential service and is free of charge for all HSE employees. The service is provided by trained and experienced counsellors.

“Occupational health provides a confidential, independent advisory service. The emphasis of the service is on the protection of employees from the possible adverse effects of work-related activity. Employees are provided with sensitive and practical support to assist them to cope. This is the responsibility of the senior and line manager. We have 24/7 security in place that are contactable if and when an incident occurs to ensure staff safety.

“Additionally, we have a policy on continued payment in situations of injury at work.”