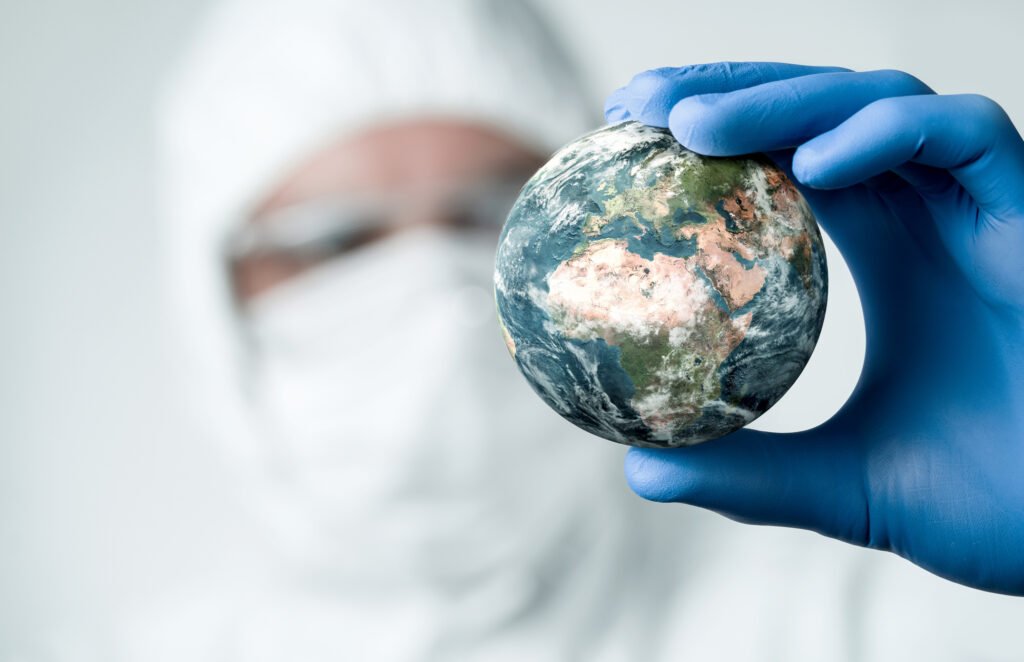 David Lynch asks what the collective memory of previous pandemics, such as the 1968 Hong Kong influenza pandemic, can tell us about how Covid-19 might be remembered

When you are living through a global pandemic, the numerous consequences of which have consumed our lives, it is difficult to believe that it could ever dim in people’s memory or even be one day forgotten. But arguably, that is what history has taught us can happen.

Many commentators and historians have written and commented on the relative lack of historical memory of the 1918 ‘Spanish flu’ pandemic. The more recent 1968 pandemic (H3N2 virus) – sometimes called the ‘Hong Kong flu’ – is even less prominent in the global collective consciousness.

This is despite the fact that, according to the US Centres for Disease Control and Prevention (CDC), at least one million died globally during the pandemic (some estimates go as high as four million). The 1968 pandemic also caused some major social disruption during the outbreak just over a half century ago.

“The estimated number of deaths was one million worldwide and about 100,000 in the United States,” according to the CDC website. “Most excess deaths were in people 65 years and older. The H3N2 virus continues to circulate worldwide as a seasonal influenza A virus. Seasonal H3N2 viruses, which are associated with severe illness in older people, undergo regular antigenic drift.”

Dr Claas Kirchhelle (PhD), Lecturer, History of Medicine, University College Dublin and author of the recent Pyrrhic Progress: The History of Antibiotics in Anglo-American Food Production (Rutgers University Press, 2020) believes “the question of memory is really important in the context of Covid-19 and earlier pandemics”.

“We have read a lot about how pandemics have allegedly been ‘forgotten’ or that we have not ‘learnt the lessons of previous pandemics’,” Dr Kirchhelle told the Medical Independent (MI). “I think the answer to your question is more complex than societies simply forgetting past disasters.” It seems pandemics do have an impact on policy in the short and medium term, but time can alter and possibly dilute this legacy.

“Memories of these outbreaks were retained and response strategies were formulated to prevent them from recurring,” said Dr Kirchhelle. “However, with other concerns soon displacing infectious disease fears, resulting financial and political investment was rarely sufficient to sustain reforms.”

Dr Kirchhelle notes that memories of the 1918 pandemic were “quickly weakened by other major global events like the parallel end of World War One and the political, social, and economic turbulences of the interwar period”. “However, they did not vanish completely.” Later pandemics in the 20th Century, including the one that swept the globe in 1968, occupy similarly complicated positions in our memory. Although the collective memory of such pandemics may not seem all that strong now, they did create significant changes and developments in public health at the time.

“The 1957 flu outbreak and parallel concerns about the first reported pandemic of a bacterial strain that was resistant to commonly available antibiotics prompted international concerns about future pandemics,” Dr Kirchhelle told MI. “These concerns were heightened by the ‘Hong Kong flu’ in 1968.

Plans were put in place to survey and rapidly react to the rise of new pandemic strains. “The 1976 swine flu episode in the US where the CDC and Ford administration launched a major vaccine campaign to ward off a projected pandemic was one of the results of this focus on preparedness.” Even more recent decades have seen major changes in public health policy because of epidemics and outbreaks, which we may not recall that often.

“Since the 1980s and early 1990s, concerns about emerging and re-emerging infections prompted major reports to call for the creation of strategic stockpiles, strengthened national surveillance, new international surveillance networks, and research on platform technologies that could be rapidly modified in response to new pathogens,” Dr Kirchhelle added.

He said that some of these calls were listened to by politicians in the wake of major scares like the 2003 SARS outbreak, the 2001 anthrax letters, the 2009 H1N1 pandemic, or the 2015 Ebola resurgence.

“However, many others were not,” he noted. “Or [they] only resulted in short-term injections of resources that were insufficient to sustainably raise and maintain preparedness. “One of the reasons for this relative neglect of infectious disease preparedness is that, in the absence of widespread mortality resulting from communicable disease, the public health sector has had a hard time defending the need for well-funded surveillance and preparedness infrastructures on a crowded political marketplace (see panel below).

“In public and political circles, concerns about the adequacy of infectious disease infrastructures have often been overshadowed by debates about the rising costs of health and social care as well as concerns surrounding chronic and lifestyle diseases and environmental health.”

Prof Arnold S Monto, Thomas Francis Collegiate Professor, Department of Epidemiology, School of Public Health, University of Michigan, US, told MI earlier this summer that the “1968 pandemic was considered moderate in impact. In Europe, the major wave was delayed by a year.” Prof Monto said that “there was a change in the haemagglutinin of the virus, but not the neuraminidase which remained the same.”

Thus there was “immunity in the population”, however, “with this novel virus (Covid-19) there is no immunity to the virus which renders it so dangerous.” “The greatest threat now is the great surge of cases overwhelming the healthcare system and the long duration persons need hospital care, not a typical feature of even severe and lethal influenza; and it is much more spotty in occurrence, again not like influenza.”

In terms of a further “take home message” that could be learned from the 1968 pandemic, Prof Monto said that the lesson of being prepared was key. “[The 1968 pandemic] took place only 11 years after the previous one (1957). The previous pandemic before that was in 1918,” he said. “Therefore, you can’t count on [an] interval and must always be prepared. That is hard for our leaders because it requires funding.”

Mr Frédéric Keck is the Director of Research at the Laboratory of Social Anthropology, CNRS-Collège de France-EHESS, France and has written widely on the 1968 and other pandemics. He told this newspaper he believed much of the legacy of that event was political. “I think the main difference between 1968 and 2020 is political,” Mr Keck told MI. “In 1968 governments feared a social crisis due to inequalities enhanced by the Cold War. In 2020 they fear an ecological crisis revealing the dependency of the world economy… [on] China.

“The number of casualties from each pandemic may turn out to be the same…. But the discourse about the pandemic is very different in the media.” He said that, with the earlier pandemic in the late 1960s, the popular media regarded it as “one of the risks that should be accepted for an open economy, like car accidents”.

However, more than half a century on and the global media landscape is very different in 2020 than it was in 1968. “Today it [the pandemic] is something that must be mitigated, and governments have prepared for this event in the last ten years – even if the cost of preparedness is too high for neo-liberal governments.”

Mr Keck said that he believed that the “main lesson” of the 1968 pandemic “is that there should be an intervention of the welfare state, as it happened in Hong Kong in 1968, to mitigate the inequalities revealed by the pandemic.”

According to Dr Mark Honigsbaum (PhD), writing in The Lancet in March, the “1968 influenza pandemic – or ‘Hong Kong flu’ or ‘Mao flu’ as some western tabloids dubbed it – would have an even more dramatic impact [than the 1957 pandemic], killing more than 30,000 individuals in the UK and 100,000 people in the USA, with half the deaths among individuals younger than 65 years – the reverse of Covid-19 deaths in the current pandemic.”

Ireland was also impacted by the events of 1968. MI columnist Dr Muiris Houston recently wrote about the 1968 pandemic in The Irish Times. “The last serious pandemic infection occurred in 1968,” wrote Dr Houston.

“Although far less referenced than the Spanish version, it resulted in an estimated one million to four million deaths, far fewer than the 1918 pandemic.” On the experience of the pandemic on this island, Dr Houston quoted an unnamed retired Irish female GP who described the rural village in which she lived and worked as being like a ghost town during the outbreak.

“There was no one on the streets,” wrote the GP about Ireland during the 1968 pandemic. “Entire households were affected, with no one stirring out for weeks. Essential supplies were delivered by neighbours lucky enough not to be affected.” Dr Houston also noted that in Ireland the rate of house-calls rocketed, and this GP “worked 18-hour days for weeks on end before succumbing to infection herself”.

“The 1968 pandemic was caused by an influenza A (H3N2) virus comprised of two genes from an avian influenza A virus, including a new H3 hemagglutinin, but also contained the N2 neuraminidase from the 1957 H2N2 virus. It was first noted in the United States in September 1968. The estimated number of deaths was one million worldwide and about 100,000 in the United States. Most excess deaths were in people 65 years and older. The H3N2 virus continues to circulate worldwide as a seasonal influenza A virus. Seasonal H3N2 viruses, which are associated with severe illness in older people, undergo regular antigenic drift.” Source www.cdc.gov

The historic problem of prestige and public health

“The rise of AMR [antimicrobial resistance] concerns and emergence of new diseases in the 1980s and 1990s helped resolve some problems but was insufficient to overcome all of the above-mentioned problems. “Despite frequent public affirmations of the importance of public health by many politicians and practitioners, actual funding levels for many public health systems in America and Europe remained precarious throughout the 2000s.” This relative lack of funding has led to consequences that have become very stark during the present pandemic.

“Lack of sustained investment and frequent political shakeups in countries like the UK further reduced preparedness. “The consequences of this longer term neglect have been made obvious by Covid-19.”

In terms of our current pandemic, Dr Kirchhelle said he was “confident that the combined shock of Covid-19 and of the climate emergency, which makes future pandemic events more likely, has ended the relative complacency surrounding infectious disease hazards in high-income setting.” “The generations experiencing the current shock to the global economic system will not forget the hazards posed by infectious disease any time soon.”

While he believes that the current crisis will leave a lasting impact in the memory of those who lived through it, he is not so sure that this will in fact lead to the correct policy decisions regarding public health and infectious disease.

“I am, however, less certain that the charged political atmosphere in many countries will necessarily result in wise reforms,” said Dr Kirchhelle.

“What matters now is that politicians and societies create public health structures with sufficient autonomy and resilience to sustainably assert public health interests within the wider medical marketplace.

“This will require long-term funding commitments, an upgrading of public health education at medical schools, and careful reviews of the strengths and weaknesses of different public health systems during the different stages of this pandemic.”

This conclusion is one that many public health specialists in Ireland will certainly find themselves agreeing with.