The Mercedes EQB – a smooth and comfortable driving experience 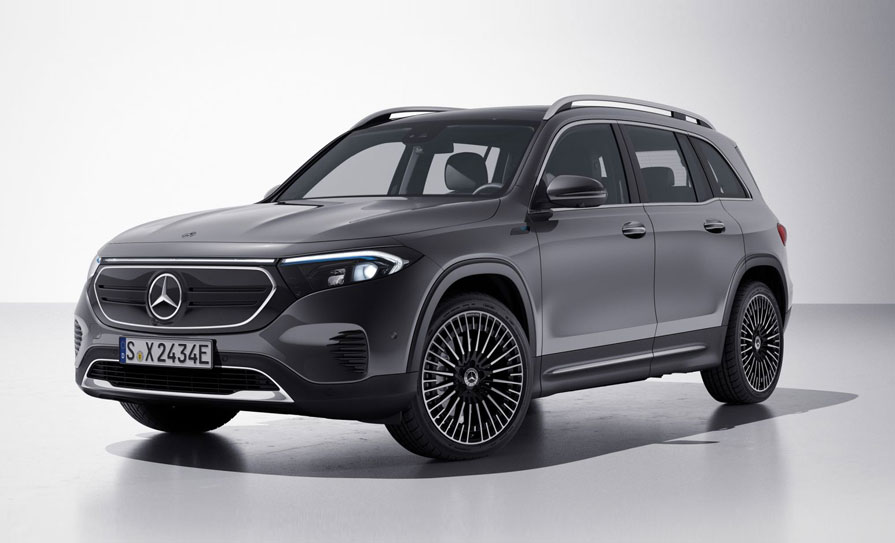 So, when I was offered the EQB, I presumed it was an all-electric type of B Class. Well, yes and no. It is based on the GLB, their SUV offering, falling nicely between the GLA and GLC.

And I’m used to the B Class Mercedes being Golf-sized. Yet the EQB feels bigger than the Golf. In fact, it is nearly half- a-metre longer. According to Mercedes’ website, it is actually longer than its ‘bigger’ sibling, the GLC.

Anyway, it is the new electric seven-seater Mercedes SUV that almost seems to be passing under the radar compared to the saloon Mercs. And if you are looking for an SUV that has seven seats, your options are somewhat limited. There’s the Skoda Kodiaq, Kia Sorento, Hyundai Santa Fe, and Volvo XC90. Throw in electric-only and the alternative is to go all out on the Tesla Model X. Or the Vito derived EQV. But that’s broadening the search criteria.

To drive, it is lovely, as are a lot of electric cars

To drive, it is lovely, as are a lot of electric cars. Smoothness, quietness, and refinement are all already part of the Mercedes package. But these qualities are better now in an electric car.

No doubt its weight of about 2.5 tonnes helps iron out a lot of surface irregularities, but to my mind, compared to the spouse’s E Class, I felt the suspension of the E was more composed. But then the E Class is excellent. The EQB has all-wheel drive – this adds great stability when riding over uneven surfaces, particularly when accelerating. Say you are on a narrow road, the typical Irish ‘R’ road with uneven surface, wet, slippery, and you have to overtake. Well, this happens completely fuss free, the EQB just goes. It will hold its line, even if there are large puddles of water on the side of the road. The cornering grip is really tight. Although the 0-100kph time is rated at 8.0 seconds, it feels quicker.

It is funny as sometimes we enjoy things with the luxury taken out, such as sleeping in a camper van, or even a tent. Or riding a motorbike. Yet the EQB brings back the luxury, eliminating the diesel rattle, the need to change gears, to struggle with the steering. And it makes it all likeable, an easy car to drive and to travel in.

I’m told that the handover of a new car by a salesman can take up to one hour explaining everything. I know I haven’t learned all of the features the EQB has to offer. You see, the EQB has several driving modes. Personally, I liked the “D-auto” mode, (found by pulling on the right paddle shifter), which allowed gentle driving and deceleration without the characteristic “it feels like the brakes are on” regeneration. But coming to a junction or a bend, or coming up behind another car, the EQB gently decelerates. Of course, if the car in front stops, the EQB will slow steadily down to about 15kph. After that I bailed out and applied the brakes myself. Despite using its inbuilt radar to do this, the radar is not incorporated into the cruise control to make it adaptive. I didn’t think it would be a big ask to get it to do both.

The Mercedes EQB has what is known as MBUX, or Mercedes Benz User Experience. Using this, it is possible to change the digital dashboard displays to different dials or having sat nav directly from beside the speedometer. You can even set it for speed limit recognition to reduce the cruise control speed to what is displayed on traffic signs as you pass them. Mercedes is proud of its safety features.

As for the navigation, has anyone told the navigation companies we don’t really have a border with Northern Ireland? When I’m in Drogheda, I can’t programme Belfast or anywhere else in the North, but once I cross the border, I can. When in the North, it can’t find anywhere in the South again, untiI I cross the border. Don’t worry, a lot of sat navs do this, but strangely our phones don’t.

I don’t have a wall charger at home, so I was left to my own devices, namely a three-pin plug. My first long spin was to Kirkistown from Drogheda. I left home with a potential range of 377kms, aka a full charge. I had over 300kms done when I got home and had a reserve of 53kms left. Ok, I used no heater and no air con, but at times, along the way, there were fair tests of handling and acceleration. Plugging in at home gave me a range of 277kms by the following afternoon, enough for a few trips around town. Two days later, using said three-pin plug, I had a full charge back in the car. A Mercedes wall charger will charge it three times faster, but the old-fashioned plug worked for my needs. I could have used any of the chargers in Drogheda or a fast charger in Castlebellingham on the way home, but I couldn’t be bothered.

The EQB starts at €65,000. For a Mercedes, it is good value. It is smooth, comfortable, and likable.