The fun of dirt biking 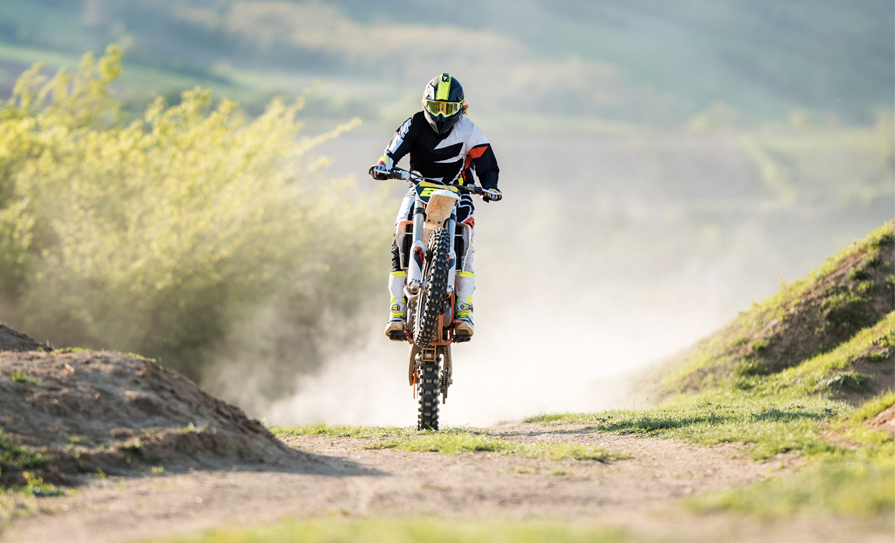 It started with a simple question. A lady texted me and asked me to suggest a birthday present for her husband. Naturally, I suggested things I would like to do, as it might give someone I know and love a hint.

Now let’s say this lady is slightly nervous of her husband on a motorbike. But when I suggested off-road biking, she jumped at the idea. No cars, slow speed, full protection, what’s not to like?

Now let’s classify things a little: Dirt bikes are light, usually single-cylinder and simple. They’re not designed for speed, but for lightness. They must be easy to pick up if, sorry, when, you fall over, and can’t get a foothold on a slippery surface. No headlights, no screen, no taillights, not even a registration number. These are bits that can break and need replacing, as well as adding weight. And adding lightness is the key. Some even argue that they don’t need electric starters, or batteries, a simple kick-start would do nicely. I disagree, for reasons you’ll find out soon enough.

These are not adventure bikes, the likes of the BMWs that Charlie and Ewan rode around the world (with full support), or the Yamaha Ténéré , famously used by Nick Sanders in his mad adventures (with no support). For example, Nick rode from the southernmost point of Argentina to the tip of Alaska and back in 50 days, a distance of about 50,000 miles. And these bikes need to be reliable. No point lying somewhere with a bike that won’t go and you can’t get a pick-up truck up the side of the mountain.

In Wales, there are plenty of opportunities for dirt bike riding. Ireland has much fewer option. The only one I could find was a four-hour drive (for me) to Donegal. Of course, I had to go with him.

So, we headed off there, and met Paul, the chief instructor. I had asked if there was a danger the weekend’s riding could be cancelled with the weather, and I was told “we’re not fair weather bikers”. Anyway, a day in Donegal without rain would be remarkable.

Bikes, protection, and sandwiches were provided. Now, when I say protection, it was from falling rather than from the weather.

Soon he took us across the slippery stuff. We were introduced to another rule, “stay off the brown stuff”. Of course, I didn’t, and I became the first to fall over into the wet with the bike on top and my left boot filling with water. And then I appreciated the relative lack of weight of the bike as I got going again. Then came rule three: “If you’re between a low spot and a higher spot, tend to lean to the higher spot because it’s easier to put a foot down there.” (Obvious now….)

Off we went to practise going across watery ditches, followed by rule four: “Use a higher gear and plenty of throttle, to keep the momentum up.” Fell there too.

Gravel lanes I managed well, despite the ruts and the water. Then came the slopes and rule five: “Just go down using engine braking, first gear. Don’t touch the throttle or brakes.” First time was fine, but I fell every time after that. By now I was starting to appreciate the electric starter and glad I didn’t have to kick-start the bike.

It was followed rapidly by rule six: “Look where you want to go.” If you look at the hole or the ditch, you’ll hit it. Also rule six: “The bike follows your nose.”

After lunch, we elected to go on more paths rather than up mountains. We were taken along a “path”, in the loosest sense of the word. We were told to stay away from the barbed wire fence and I managed to get stuck axle deep in the mud. Then I learned why it is best not to travel alone on dirt bikes. Paul lifted the bike and I lifted the front wheel, then manually rotated it to get out of the mud.

All of us made some mistake or other on this ‘path’, yet on the return journey not one of us made a mistake on the same surface. Maybe we were learning after all.

It was exhilarating, brilliant fun. I was exhausted at the end. I am not famous for my physique or upper body strength, and the day after my arms, quads, left calf, and left ankle were sore (not helped by a certain bike falling on my left leg). Nothing two aspirin wouldn’t cure. Paul videoed us several times along the way, and despite thinking we were brilliant, I couldn’t believe how slow we were. Maybe that’s why we fell off with no injuries.

Anyway, would I do it again? Yes, certainly. And I’d remember the most important rule: “Look where you want to go….”

And for those an interest in dirt bike riding and want to take it to the highest level, there’s the Trans Euro Trail, or TET. In their own words: “Comprising over 51,000km of dirt road, the Trans Euro Trail is an epic motorcycle journey through some of Europe’s most remote, diverse, and inspirational landscapes.”

“Influenced by the pioneering Trans America Trail, the TET encourages adventurous riders to travel light and experience the rich diversity of Europe’s land and culture.”

Have a nice weekend.