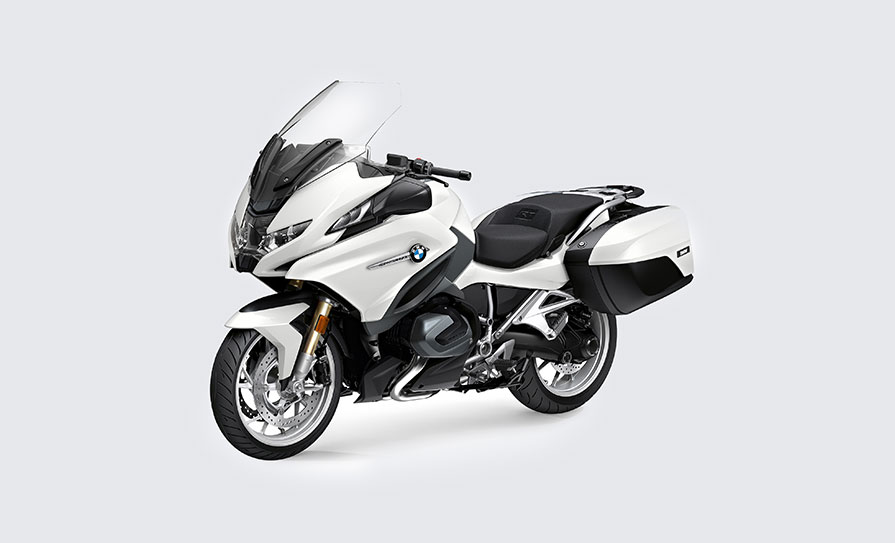 The basic engine, a horizontally opposed two-cylinder, dates back to the origins of BMW, with the famous R32, a 500cc flat twin air cooled shaft driven bike. The basics of this design remain, but today’s bikes can do more than the 60mph of the original.

It is a famous engine and I have no idea how many were made over the years. Of course, Honda’s 50cc engine will seriously outnumber anything else ever made, but the basic BMW boxer engine is also well known from the Long Way Round BMW GS bikes of Charlie and Ewan.

Famously BMW was an aircraft manufacturer in World War I, but was forced out of that end of the business by a certain Treaty of Versailles. BMW are proud of this and their badge with alternating blue and white colours apparently reflect the sky colours seen through a propeller. Those of us who have driven in prop driven aircraft know that’s not quite true.

Anyway, they happened to have a nice trick up their sleeves, in my opinion. This is a horizontally opposed engine, with a side-to-side action. The main action occurs along the direction of travel of the bike. This makes “turn in” easier.

Some of the iconic bikes of all time have a similar arrangement, such as Moto Guzzi, and Honda’s Pan-European and Gold Wing (a flat-six engine, same as the iconic Porsche 911). However, none of this was necessary for a certain Mr Rossi to dominate motor bike racing for the last few years.

Famously, the first English woman to ride around the world was Elspeth Beard. Her choice was the BMW R60/6, because it was more reliable than British bikes at the time. A little-known fact was that her father was a famous psychiatrist.

Fast forward to 2022 and we have a R 1250 RT boxer engine available for you to buy right now. This is the ‘Sport Touring’ version. Although based on the previous aforementioned bikes, it could not be further apart. I got one recently and the leap in technology that has taken place with motorbikes is wonderful. Now the BMW RT has a digital TFT dashboard, which connects to your phone with an app. The speed limit for the road is displayed on the top left of the dash, with sat nav available as the entire screen or shared with the rev counter. Cruise control is standard on the LE version, which is now adaptive. It will keep a gap (can be set via a button on the handlebars) and it will brake the bike down to about 50kph, then it disconnects. You’re on your own then. BMW don’t want to be blamed if you slow to a stop then fall over. Suspension is now adaptive, and there are different modes for the throttle settings of the bike. Rain mode cuts back on the bhp and torque available, with dynamic unleashing all 136 bhp available.

Of course, seat and hand grip heating are there, but you’ll need to set up a shortcut button on the side panel instead of scrolling through menu functions to control it safely. The trip computer will display all sorts of data on your economy, and for safety there are tyre pressure sensors ready to flash warning outside certain limits.

But what struck me most of all was the bike’s lightness. My previous bikes were the four-cylinder K1300GT and Honda’s six-cylinder Gold Wing, both surprisingly heavy in comparison. What there is no comparison with is the engine. The two-cylinder RT is smooth for a two-cylinder, but it does not match the smoothness of a 15-year-old (maybe more) four-cylinder. Of course, nothing touches the six-cylinder Honda for smoothness. When cruising the RT on an even throttle, you would be hard pressed to know it if was a two- or four-cylinder. But getting to that speed you’ll work it out. Not that it’s a big effort. All two-cylinder bikes are noted for low down torque and the RT is no exception.

With advanced motorbike training, there is what is known as “the RT syndrome”. Trainees are prone to leave their RTs in third gear a significant proportion of the time, such is the torquiness of the engine, tending not to use the gears to control the speed. On group ride outs, the guys in the RTs are often the last to ask to stop to fill their bikes, such is the economy. The RT is easily doing 40mpg. Those who ride the RT regularly will criticise the seat for its apparent stiffness, but I am assuming the same people haven’t sat on a bicycle for five hours, or a Ryanair seat.

Luggage is well catered for with large (and detachable) panniers, and small compartments for smaller items, such as phones. And they can be locked with the bike’s central locking.

I have the bike about six weeks now and am looking forward to seeing what the fuss is about. I get that it is a brilliant combination of “sports”, in that it has nippy acceleration, neat handling, and you can u-turn it easily on a two-way street. In contrast, the Gold Wing is heavier, not quite as easy to turn, not quite as economical, but it is absolutely unbeatable on a long ride. As a good friend tells me: “If you want to go far, take a Gold Wing”.

To date, my one-year-old BMW has had a new clutch and new exhaust. The chap who advises me about my pension happily tells me the past is no predictor of the future, and I sincerely hope that is so about my RT, but I haven’t heard of a Honda needing such warranty claims.