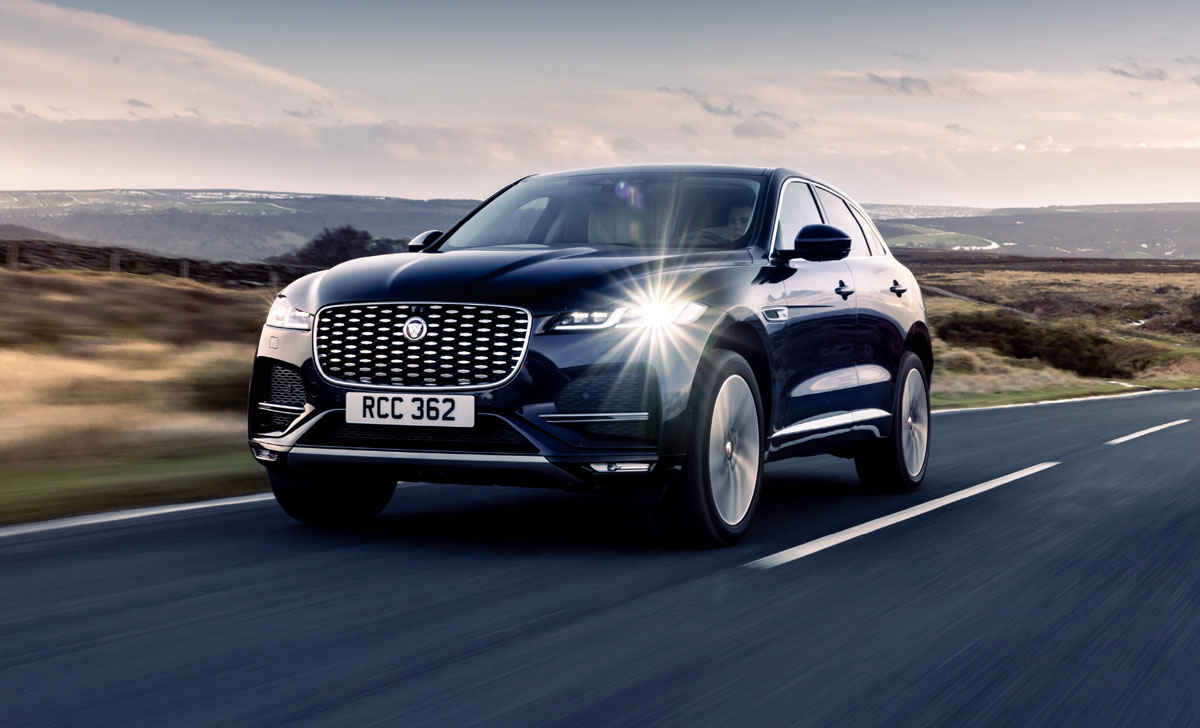 We are in a funny time in the car industry. Look at the car sales figures for 2022 and you’ll see that diesel sales are falling through the floor and anything with a hybrid powertrain or some sort of plug is now entirely ‘en vogue’.

So it is pretty lucky Jaguar decided to keep its worthy F-Pace SUV up to date as previously the car’s core sales would have come from diesel. The idea a few years back that Jaguar would be selling SUVs at all seemed a little weird, given it seemed to be treading on sister brand Land Rover’s toes. But the F-Pace, and more recently the I-Pace do make sense, with the F-Pace already gaining a loyal following for its blend of luxury and road manners. It managed to blend functionality with Jaguar’s famed road manners, all with a whiff of rugged thrown in.

And now Jaguar present us with a revised F-Pace. While the exterior changes might need you to look for your specs, the interior changes are much more comprehensive, and indeed welcome.

For a start, on the outside there are new LED headlights, with their ‘double-J’ daytime running lamp signatures, new rear LEDs, a reshaped bonnet to suit the slimmer lights, as well as new front and rear bumpers and revised air intakes.

This was already a good-looking SUV, and now it is marginally prettier. Not earth-shattering news. However, the bulk of Jaguar’s efforts have instead gone into improving the interior. And that is improving on what was a good, if not excellent predecessor. The main news, as so often is the case these days, surrounds the infotainment system, the modern day car’s altar, upon which it seems to live or die.

The new 11.4-inch Pivi Pro system is presented on a curved glass display and is the prettiest display I’ve seen in a car yet. And it works really, really well. It is responsive, intuitive, and wireless too, both in terms of charging your mobile and connecting your device to Apple CarPlay or Android Auto. Most controls are via this system, but there are lovely dials for the air-con and heated seats and a short, stubby gear shifter, which if I was critical, was a little slow to respond when you are going back and forth in a parking manoeuvre. Being a Jaguar, as you might expect, there is plenty of high-quality materials on show, with wood and metal that wouldn’t look amiss in a high-end private members club. It is now more modern and it is not one bit stuffy.

The catchy P400e is a PHEV (plug-in hybrid electric vehicle). And while these no longer attract the grants they once did, they remain relevant because of their ability to reduce your fuel consumption, which lowers your CO2 emissions (and your annual motor tax) and can, in some cases, mean you are able to drive on shorter journeys on EV power alone. Jaguar says that this can travel up to 53km on EV power alone thanks to a 17.1kWh battery powering a 105kW electric motor. After a week and a lot of kilometres in the car I can tell you those numbers aren’t likely. But around 30km should be easy enough without too much effort and that for many could mean their daily commute to the office uses little or no fuel. As a PHEV, working as a hybrid (you can choose to use the car as an EV, switch it to hybrid mode or save mode, and reserve your electricity to a time you choose), the F-Pace isn’t quite the fuel-sipper we had hoped for.

Driving at 100km/h on the motorway we were averaging about 7 l/100km and this went up to almost 10 l/100km at 120km/h. This is 2.2 tonnes of SUV and it seems no battery, plug or miracle is going to make it frugal. However, if you’ve spent north-of-€80,000 on this you most likely aren’t sweating the end of the month too much. But if geography allows, you could find this a reasonably useful sort-of-EV. For similar money, of course, you could have the I-Pace black edition, which feels smaller, but is brutally fast and has the most engaging driving experience of any EV at the moment. But stick to the F-Pace and you get a generously-sized rival to an Audi Q5 or BMW X3, with slightly less luggage space lost to the battery, but enough room for five adults to sit in comfort. And this too is a really nice drive. This is the second-most potent F-Pace behind the 100 per cent more expensive SVR model (and it’s also the cheapest engine variant), and sprints to 100km/h in 5.3 seconds on to a potential 240km/h top speed. That is urgent in a 2.2 tonne car. And one you’ll only have to pay €140 motor tax on. The handling is really impressive. It isn’t as fun to drive as the I-Pace, but it moves through bends really well for a car of this size.

Personally, I’d prefer the I-Pace, which was a car I really hated returning, but if you aren’t quite ready to make the leap into EV yet, then this PHEV F-Pace offers the best of both worlds in a very handsome and tastefully updated package.