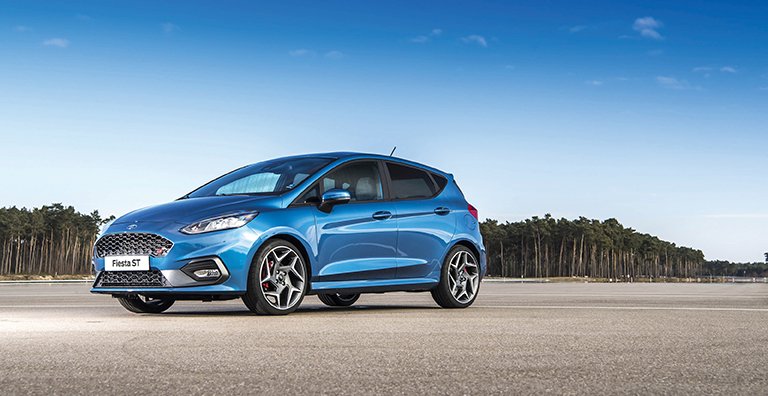 The Ford Fiesta has grown up to be an understated hot-hatch that doesn’t shout about it, unlike some of its contemporaries. I’m looking at you, Honda and Mini. As can be expected, it is sportier and better-looking than the standard Mk7 Fiesta, by quite a margin, thanks to some subtle body trim upgrades that suit the car very well.

There are two ST models available in Ireland, the ST2 and ST3, which come with three or five doors. Ford loaned me a terrific four-door ST3, which is the top trim model, in blue, for a week and I fell in love with it. This wonderful hot hatch comes with, among other things, a full five-star safety rating from Euro NCAP and you can also order it with a glass roof.

The Ford Fiesta ST is the car equivalent to a Jack Russell terrier; small and feisty, with the guts to back it up. In the case of the ST3, those guts equate to 200 horsepower and a 0-100km/h time of 6.3 seconds. The car handles brilliantly, and I don’t just mean for a vehicle with front-wheel drive set-up. The Fiesta ST corners at speed as if it is on rails. Also, the close ratio six-speed gearbox is short and snappy, like the bolt action on a well-oiled rifle. It also has a proper manual handbrake for, eh, hill starts, and not at all for hooligan handbrake turns in car-parks.

When Ford get the recipe right, it’s simply the best and the Fiesta ST3 is the best bang-for-buck car I’ve driven since the Skoda Octavia RS. The last Fiesta ST left motoring journalists across Europe aghast by its brilliance, leaving this latest model with very big boots to fill — specifically because of its smaller 1.5-litre, three-cylinder, EcoBoost engine. However, any concerns fell by the wayside immediately as it proved to be quick, responsive and frugal, at 6.0l/100km (or 47mpg). The engine note, although artificially enhanced and pumped through the speakers into the cabin, sounded wonderful as it popped and gurgled like a Group B rally car.

The ST3 offers the driver selectable drive modes, which allows you to choose between Normal, Sport, and if you feel like having a crash, Track mode, which warns you to turn it off immediately if you’re not on an actual race track. Its new 1.5 litre motor also produces 50Nm more torque and 18 horsepower more than its 1.6-litre predecessor.

The ST3 weighs in at a bantamweight of 1,262kg, or 1,283kg for the four-door model and boasts electrically power-assisted steering and a high-performance braking system. The Ford Fiesta ST3 is in the B2 road tax band, costing a relatively affordable €280 per year.

Sitting into the Fiesta ST3, you are greeted with a set of stunning half-leather Recaro racing seats which, aside from being comfortable and cool-looking, also hold you in a perfect driving position. The sometimes-dodgy Ford plastics appear to have been given an upgrade, as the finish seems to be top-notch throughout. The model I tested also had a bone-shakingly powerful Bang & Olufsen 10-speaker sound system.

I have grown to like Ford’s infotainment system. It’s easy to use and comes with Apple Carplay and Android Auto as standard. It’s also a decent size and seems to be a good compromise between Mazda’s calculator-sized, non-touch screen and Volkswagen’s tablet-sized affair. The steering wheel controls are easy to use and don’t feel too cluttered either.

It must be noted that small cars are no longer as little as they once were. The Ford Fiesta you have in your mind’s eye has grown up to be quite the substantial little porker. In fact, it’s now the same size as the Ford Focus was when it was first introduced in 1998. I had the four-door model and found there to be adequate room in both the boot, at over 200 litres, and the back seats.

The ST3 came with some great additional options that I would advise you to go for if you’re ordering your own, specifically the performance pack, which gives you a limited slip differential, launch control and performance shift lights. It would also be worth opting for the Bang & Olufsen premium sound system with Ford SYNC 3 Navigation System, which includes an 8’’ touchscreen and 10 speakers, giving the occupants 360° sound.

Once I finish testing a car, I either hand the keys back, thankful for the experience but knowing that I wouldn’t buy it with my own money, or I wishfully lament over something I’ll never be able to afford or support. However, the Ford Fiesta ST3 changed the game and brought me as close as I’ve even been to making a genuine offer on my test car. Ford have done a terrific job with the latest ST. It’s a pleasure to drive thanks to its chirpy, powerful engine, agile chassis, quality interior and moderate price. My only con is the ride, which was harsh on uneven road surfaces because it has been honed for performance over comfort.

If my GP arrived at my house in a Honda Civic Type-R, I’d raise my eyebrows, but I wouldn’t have the same reaction to a doctor in an understated Fiesta ST, so don’t let old stereotypes get in the way of test-driving this car.