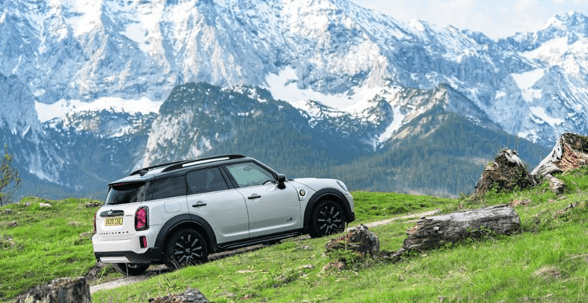 It’s been a very long time since the Mini was actually mini and the beefed-up Countryman is the biggest of the range. The big Mini has had some design updates for 2020 and a plug-in hybrid system.

It’s also available with two petrol engines and one diesel engine featuring the latest TwinPower Turbo Technology. It’s also better for the planet, thanks to some serious work on emissions performance. This includes particulate filters for petrol engines and SCR with AdBlue injection for diesel engines, meaning that all model variants of the new Countryman now meet the particularly rigorous Euro 6d emission standard.

Mini’s TwinPower Turbo Technology is used in the three-cylinder petrol engines of the new Mini Cooper Countryman and in the four-cylinder petrol engine of the new Mini Cooper S Countryman. It now includes an exhaust manifold integrated in the cylinder head, along with turbo charging, in highly effective cooling of the exhaust gases and the turbo-charging system. At the same time, crankcase cooling can be reduced when demand is low in the partial load range by means of a new split cooling valve.

Like the petrol engines, the diesel engines also have a new starter generator with optimised efficiency. In the four-cylinder engines of the new Mini Cooper D Countryman, the turbo-charging system features exhaust gas recirculation and common rail direct injection. The two-stage turbo-charging system previously used exclusively in the most powerful diesel engine now also optimises the response of the four-cylinder motor in the Cooper D Countryman.

Mini’s all-wheel drive system, the ALL4, is an option for all engine variants and comes as standard in the hybrid model. According to Mini, it provides a noticeable boost in terms of traction, driving stability and agility by ensuring a need-based distribution of power between the front and rear wheels in all road surface and weather conditions. In the hybrid, the ALL4 system manages a precisely-controlled interaction between the three-cylinder petrol engine transmitting its power to the front wheels, with an electric synchronous motor that acts on the rear wheels. Together, the two power units produce a system output of 162 kW/220 hp.

It is also optionally available for the Mini Cooper D Countryman. For all other model variants, a seven-speed Steptronic transmission with double clutch is optionally available to replace the standard six-speed manual transmission. The most powerful petrol and diesel engines can also transmit their drive torque to a seven-speed Steptronic sports transmission with double clutch or an eight-speed Steptronic sports transmission. This enables particularly rapid speed changes and increased shifting dynamics.
The big Mini Countryman is instantly recognisable as the brand’s largest model, with its upright stature and increased ground clearance indicative of its generous interior space. The new Countryman has a versatile interior with three fully-fledged rear seats which fold down, expanding transport capacity and storage from 450 litres up to 1,390 litres.

The redesign of the front section for this new model adds LED headlamps to the standard trim, with turning light included in the functional range providing intensive illumination of the side areas of the road when changing direction.

The standard trim of the new Countryman also includes LED fog lights, with a light band in the upper semi-circle of each fog light serving as a parking light.

The Cooper S Countryman and Cooper Plug-In Hybrid models now come with Piano Black interior surfaces for the cockpit and door bezels as standard. These are combined with accentuation strips in the variant British Oak.

A new version of the highly exclusive Mini Yours interior surfaces is optionally available. The optional Mini Yours Interior Style Shaded Silver combines an illuminated cockpit bezel in the variant Shaded Silver, with door bezels in Dark Silver and accentuation strips in Hazy Grey.

The new range of Countryman offerings from Mini seems to have something for every taste, all backed-up by that stalwart BMW build quality and starting at €34,070.