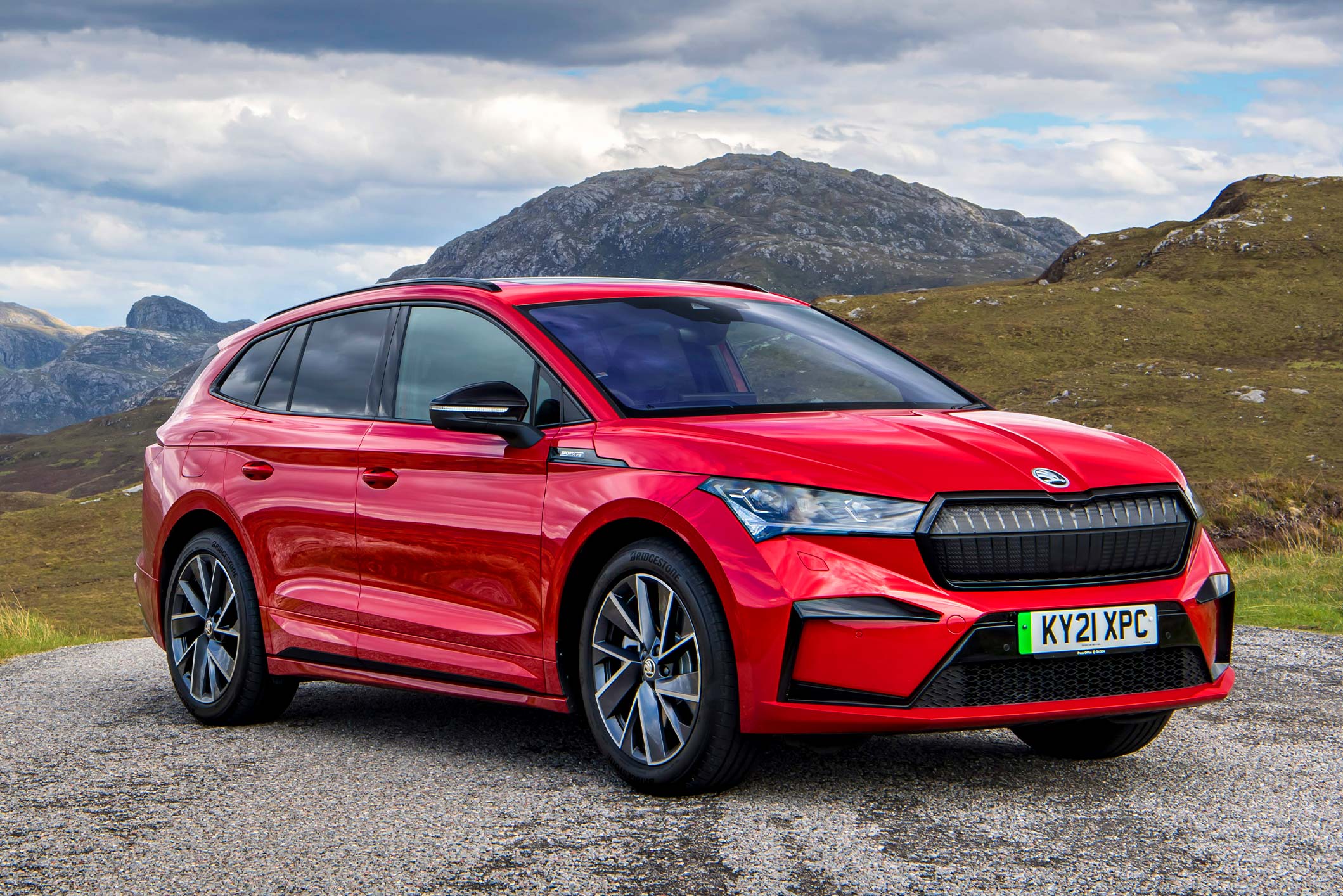 The Škoda Enyaq has been on the market since mid-2021 and is one of the most coveted electric vehicles (EVs) around.

However, in Ireland, supply has been limited compared to its Volkswagen ID.4 cousin. On the plus side for owners, it has meant residual values are pretty much peerless. Year-old Enyaqs are changing hands for similar prices to a new one, such is its rarity.

Those jurors that voted for the Enyaq as their number one choice did so because the Enyaq hits the mark in a lot of areas. It looks good; it is spacious, has a high-quality finish and is ‘reasonably’ affordable compared to its rivals (yes, we know all EVs are expensive right now).

The 80x that we are driving here is the all-wheel drive version of the Enyaq. Instead of one electric motor powering the rear wheels, there is a second powering the front wheels, too, so you get a little more power.

The Enyaq is regarded as one of the best-looking SUVs on the market, and we can see why. It has a handsome design, with some of the elements that have made cars like the Karoq and Kodiaq so hugely popular. Given that it is built on the Volkswagen Group’s MEB platform, it gives the model much more scope in terms of design, with greater use of interior space.

There is, of course, no requirement for a standard grille as you will find in internal combustion engine cars. There is a covered grille of sorts, so the Enyaq does look like a conventional SUV, yet it is anything but. It looks at its best shod in 21” wheels, which this test car has fitted as a €1,481 optional extra, but they look great. Overall, the proportions of the Enyaq are very good; it is a generously-sized car without ever feeling too bulky and sits quite a bit lower than a standard large SUV.

The Enyaq uses much of the wisdom Škoda has gained from making excellent family cars, such as the Superb and Kodiaq to good effect. Like many new cars, the centre console is dominated by a 13” infotainment system, which is genuinely one of the most intuitive you will come across. It responds quickly and connects to your mobile phone wirelessly using Apple CarPlay or Android Auto, but there are also USB C-ports in the front, and they come in the rear as part of an options pack (‘clever pack’ for €3,662 in the 80x). If you choose the almost €9,000 ‘advanced pack’, you get the heads-up display, which is particularly impressive, if slightly unnecessary. The entry pack, the clever pack, is pretty essential as it adds the wireless charging pad, heated front seats and climatronic three-zone air conditioning – so it really is a must. Space for passengers, front and rear, is generous. There is plenty of capacity in the rear in terms of legroom thanks to a flat floor, and luggage space at 585 litres is very large and will be more than enough for most family needs.

The additional electric motor at the front wheels of the 80x adds another 210kg to the already hefty 2,540kg in a standard Enyaq with a larger battery. But the extra motor adds more power, making the 80x the most powerful Enyaq you can buy, for now, with 265hp and 425Nm of torque, which is 115Nm more than the standard version. The extra motor shaves just under two seconds 0-100km/h sprint. It also increases the towing capacity from 1,000kg to 1,200kg.

The iV 60 can charge up to 100kW DC as standard and up to 125kW on the 80 and 80x. The WLTP [Worldwide Harmonised Light Vehicle Test Procedure] range of the 80x we were driving is 521km, slightly less than the 544km of the standard single-motor rear-wheel drive

80 (77kWh) model. In real-world terms obviously, it depends on how you drive it, but you should expect to be getting north of 400km from a full charge in the 80x without trying too hard. If you aren’t, then perhaps you need to look at your driving style. For some, the extra grip provided by the extra electric motor will be helpful, especially if you live in an area prone to ice and frost, but remember the grip will only be as good as the tyres fitted to the car. If you expect this higher-powered version of the Enyaq to be quick and come with eye-watering acceleration, then you will be disappointed, as the car’s considerable bulk never really feels fast in the way a Tesla or Ford Mustang Mach-E does.

The Enyaq is a pricey vehicle and you can end up going down the rabbit hole when it comes to the options list. A few clicks of the options and you are suddenly in a €70,000-plus car. The 80x is hard to justify as a purchase unless you really need the extra grip or towing capacity. The best buy for us is the standard 80 model in Sportline trim, with the Sportline offering items, such as the pretty 20” ‘Vega’ alloy wheels, Sportline exterior pack, and Matrix LED lights.

The Enyaq was tested by Euro NCAP [New Car Assessment Programme] and scored one of the highest-ever results with five-stars and a number of positive comments from the testers. This is one of the safest cars you can drive, which gives it a huge appeal for family car buyers.

The Enyaq is one of the best cars on sale in Ireland today; the difficulty is that they are pretty hard to get. Supply should get better soon, but if you can get one, then you will have one of the best cars to own. It is a big, heavy car, so you should probably get the larger battery version. Do you need this 80x version? Well, that depends on your needs. You are paying for extra grip and power, but this adds more weight too. Stick with the standard single-motor 80 version in a Sportline trim, if your budget allows.