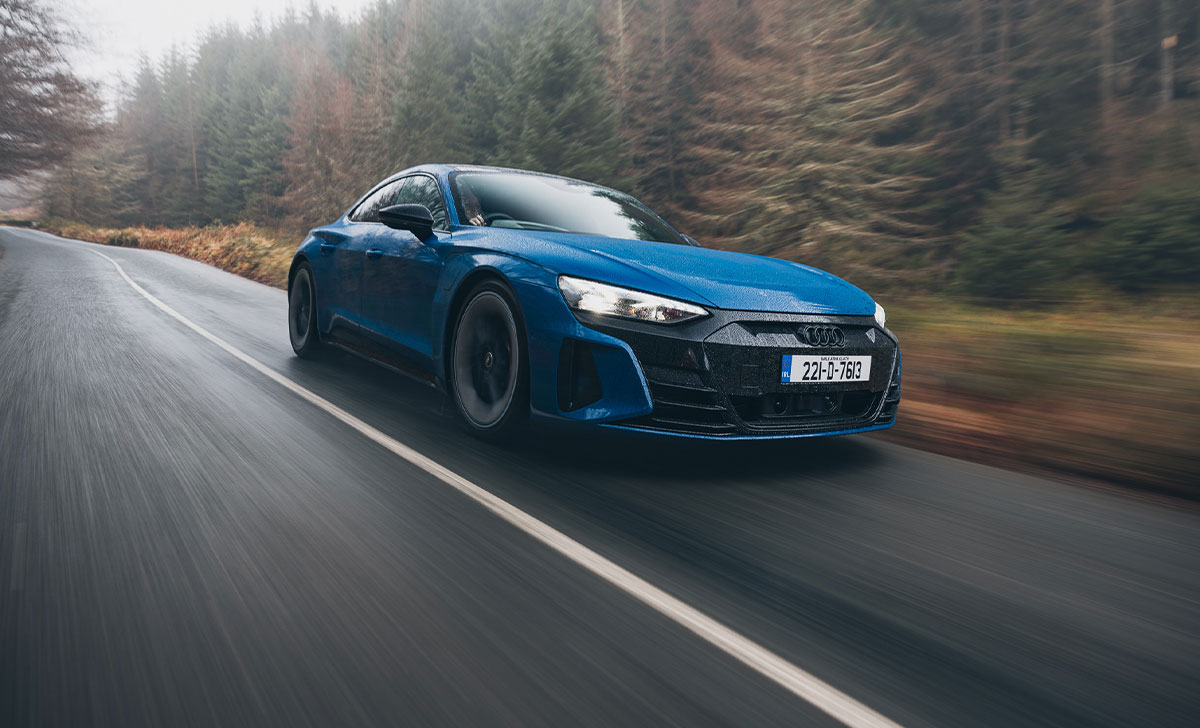 Electric cars were supposed to signal the end of interesting cars, weren’t they? Petrolheads have been saying, since the start of the so-called electric car revolution, that electric cars are little more than milk floats, and without a throbbing V8, it is no sports car. Tesla then made all that pretty laughable with their offerings. Everything from the entry-level Model 3, to the supersonic Model S Plaid, wants to pull off your face, all the time, with zero tailpipe emissions.

And now Audi is chipping in with another version of their achingly beautiful e-tron GT, a car which came to Ireland in 2021 and is a close relative to the Porsche Taycan. The e-tron GT is anything but slow, but now there is an RS version that takes things up another notch. You get the same basic recipe in the RS, so a 93.4 kW (85kWh being usable) battery, but instead of the already massive 530hp of the standard version, there is up to 645hp (albeit in Boost mode, for a short period) and 830Nm of torque compared to 630Nm in the standard GT. It shaves almost a second off the 0-100km/h time, down to 3.6 seconds (although we are pretty sure it does it in less). And all of this happens without too much impact on the respectable 465km of range.

Let’s cut to the chase and move on from there. If you can afford this car, buy it. Here is why. First things first, it looks stunning. The four-door coupé is possibly Audi’s prettiest car and that is saying quite a lot. If you want to float under the radar this might not be the car for you, as there were some near misses and strained necks as people literally stopped in their tracks to look at this car. It is practical to a degree. The cabin isn’t that big compared to the size of the car and the boot space isn’t that vast, but there are two spacious seats in the rear and plenty of room up front.

Secondly, I am not sure I have ever come across a car with such deeply refined multiple personalities. It can behave like a luxurious, comfy cruiser thanks to a clever air suspension layout that soaks up bumps with indifference. I spent most of my week, casually pootling along the motorway or through the city like I was driving a Mercedes-Benz E-Class. Then when you do select dynamic mode, invoke the car’s synthetic yet beautiful sound and stamp your right foot, all hell breaks loose. In the most controlled, Germanic manner that is. It hurls you towards the horizon, without necessarily allowing your innards the chance to catch up. With two electric motors, one on each axle, there is a limpet-like grip, aided by tyres that you’d most likely have to speak to your bank manager about replacing. It is blisteringly fast, stops equally urgently, and just goes exactly where you put it. There is no great skill required. It just does what you ask of it, like some sort of beautifully obedient robot lunatic. Although this car weighs around 2.4 tonnes, it is as agile as a Mini Cooper, which entirely muddles your brain.

Driving a car with this much power usually comes with the very obvious downside of having to put a lot of petrol into it. But, of course, it doesn’t bother with that either and even charges fast too, thanks to 800-volt charging, which will only earn its stripes if you are at one of the faster IONITY charging points that you’ll find across the country’s motorway network. The “official” range of 465km might be theoretically doable, but given the fact that you will mash down the go pedal often, that can change in a flash. We were still managing around 400km from a full charge, which is very decent.

Yes, it is ludicrously expensive. Our test car was over €160,000 thanks to some very generous box-ticking by the products department in Audi. This includes €3,000 21” wheels, which will cause you anxiety every time you park. There are, however, some of the most detailed cameras on any car to prevent mishaps.

Inside you get the usual Audi cabin excellence. Even an Audi A3 has an executive level of comfort and refinement. There isn’t the usual laptop-sized screen in the centre console; instead, there is a much more subtle screen, which fits the cabin’s enclosed feeling. The seats are incredible.

Is there any point to the RS version? Probably not. Would I have the RS version if I could? 100 per cent yes. This is not a car to apply logic to. This is a car, which if you have the means, allows you to have it all. It is gorgeous, practical, has zero tailpipe emissions, and is brutally fast and perfectly comfortable. For me, it’s the best car I have driven to date.