The returning pleasure of seasonal cooking 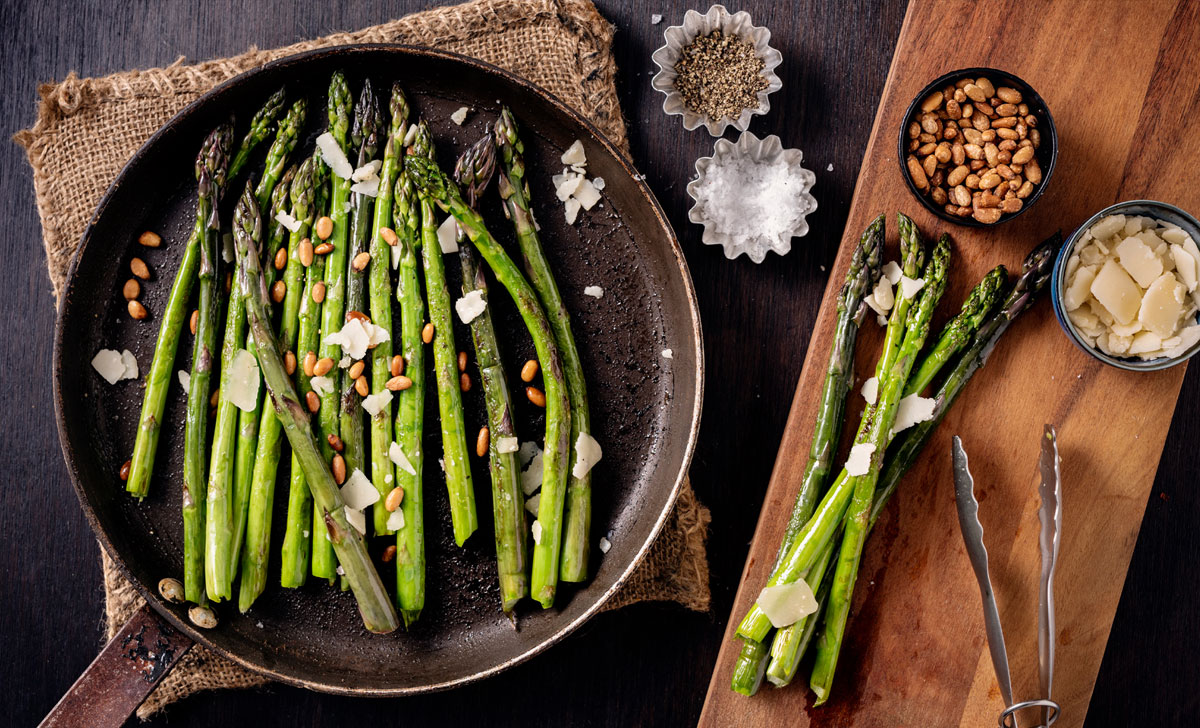 I have a framed menu from Jammet’s, Dublin’s grandest restaurant, which closed in 1967. Extravagantly French and unashamedly luxurious, it featured dishes, such as escalope de veau Viennoise for 7 shillings and Lobster Newburg for 12 shillings and 6 pence; that would be roughly 40 cent and 60 cent in euros respectively, I reckon.

As it dates from December 1953, I was surprised for a moment to see that amongst the legumes, asparagus was listed (for about 35 cent). Back then, eating was seasonal and asparagus is a spring vegetable in this part of the world. And then I understood. This would be tinned or bottled asparagus, probably the blanched white variety and, while it’s not a patch on the real thing, it’s pleasant enough in the depths of winter. I keep some bottled asparagus in the cupboard and it’s particularly good with some mayonnaise and a few shrimp.

The whole notion of seasonal eating is coming back into focus as rocketing fuel prices must be considered alongside our insistence that all manner of fresh produce should be available right through the year. I absolutely refuse to buy strawberries or asparagus in the winter. But I do like being able to buy a glossy aubergine when I don’t have my own ones from the polytunnel, and it’s a short season, usually from July to October. Making an aubergine – sorry melanzane Parmigiana – in March, using tinned tomatoes from Italy, is a happy and a wholesome procedure. And I’m willing, on occasion, to buy green beans all the way from Morocco or Kenya. Moroccan and Kenyan farmers deserve a bit of our food spend, surely?

But food miles do matter. Although it takes a lot of hard work, I’m delighted that most of the vegetables and fruit that we eat at home during the summer and autumn have welly miles, travelling all of 150 metres from veg plot to kitchen. Thanks to this, I can confidently say that unless you grow your own sweetcorn and get it into boiling water within a couple of minutes of picking, you have never really tasted the stuff. Freshly picked peas are one of life’s great luxuries and I would much sooner have them than caviar. Again, they have to be cooked within minutes, otherwise they will go starchy and rather horrible.

Anyway, seasonality is about to come back into fashion, for reasons of price. And it’s not just the cost of fuel to heat greenhouses and run engines, it’s the cost of fertiliser too. If you’re a conventional farmer you have to replace nutrition taken from the soil with synthetic fertilisers derived, once again, from fossil fuels. Organic farming is not dependent in this way, but it still needs tractors and trucks.

I’m old enough to remember when avocados were a rare delicacy, always called “avocado pears”, and very much a winter thing. And I recall when you only got to eat asparagus if you had it in your garden as we did, and then only in April and May. Now avocado on toast is mainstream – a combination that has no appeal for me, I have to say – and asparagus is on sale every week of the year.

Most of it comes from Peru thanks to a United States initiative to encourage farmers there to grow something more wholesome than coca leaves for cocaine. But they didn’t think it through. Asparagus doesn’t like the high-altitude climate favoured by the coca plant; it’s far happier in sandy coastal soils. So the US created a brand new Peruvian asparagus industry, the coca farmers carried on as they always had, and the centuries-old asparagus-growing community in Washington State was put out of business by its own government.

Very little asparagus is grown in Ireland and traditionally the seasonal stuff has been imported from Britain where the best is grown in the beautiful Wye Valley on the Welsh border. How Brexit will affect this remains to be seen. The mild winter means an early crop, but I have yet to see any English asparagus in Marks & Spencer or Tesco, both of whom had it last year. However, we should see some from France and Spain soon. Dutch asparagus, mostly the white kind, tends to be snapped up by the home market.

Growing your own needs space and patience. You can pick one spear from each plant a year after planting, two the next year, then three. In year four you can pick as much as you like, but only for six weeks, as then the spears must be allowed grow to re-energise the plant. However, your own asparagus is certainly the best you will ever taste. Incidentally, I have a small asparagus bed in the polytunnel and a larger one outside and, even then, we rarely get enough at one time to gorge ourselves.

My wife Johann and I wrote Grow and Cook – it does what it says in the title – published in 2007. It sold moderately well, but it would have flown off the shelves if it had appeared in 2009 when, reeling from the global financial crisis, more and more people started to grow their own veg. Maybe it’s time for a new edition as we’re forced to rediscover the pleasures of seasonality?

Many people of my mother’s generation knew all about the art of preserving. Fresh produce was pickled, bottled or turned into jam for the colder months of the year. I can still remember the taste of bottled plums, better, I thought, than fresh ones. And the tangy smell of marmalade being boiled in January when the Seville oranges are in season.

Of course, we have freezers now, but I think I might become a bottler and a pickler when this year’s crops are ready. There are uncertain times ahead.