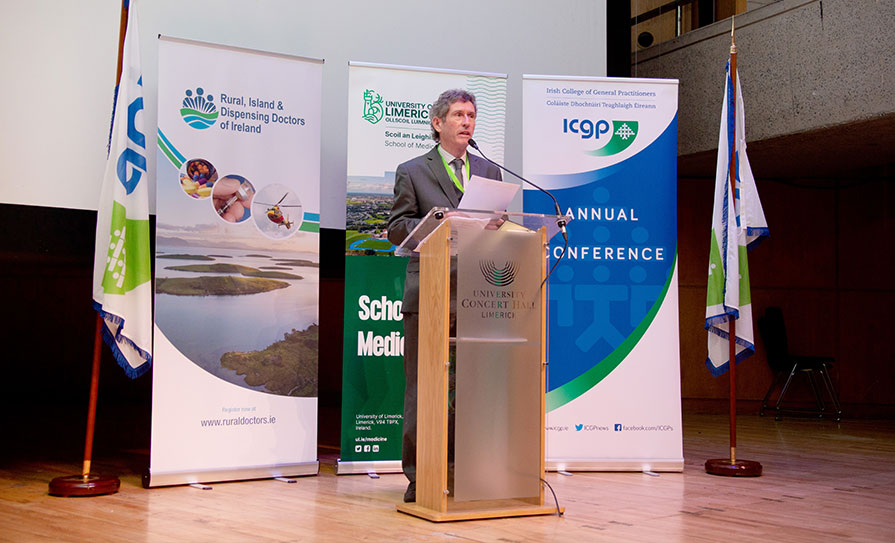 The rural doctor gathering in Limerick was all we could have hoped for.

When the wild skirl of bagpipes cleaves the air, the conference takes off. I follow the delegates and the mighty-kilted Clew Bay Pipers into the University of Limerick (UL) concert hall.

It has been three years in the planning, but the WONCA World Rural Health Conference 2022 has finally come to Ireland. There had been countless meetings to reach this point and, at last, we were ready to rock.

If I had a time machine and was able to return to the conference half-a-dozen times, I could have attended a different conference on each occasion. But this is my view of the event as someone who was involved.

I had played for each of the three main host teams at one time or another. Now they are all making their way down the steps like chieftains off to war, followed by the huge crowd of participants.

Here are the home team from the host UL medical school where I have taught since its inception, with its strong rural and primary care-centred programme.

Now come the ICGP, which had nobly guided us through the last few difficult years.

The expert conference organisers take their seats. They include Debbie Tudge and Megan Tuite; the unflappable team of Monica Casey and Kieran O’Connor from UL; and the conductor of all the teams, Liam Glynn, UL Professor of General Practice.

The marvelous UL students Brad Williams and Alexandra Ferrara have their teams of volunteers and student ambassadors standing ready. The app has been downloaded and the posters and pharmaceutical stands have gone up.

I look at the ICGP team, those essential muses who led thousands of family doctors throughout the lockdown. They are now not on computer screens, but are greeting old friends in-person. Diarmuid Quinlan, Tony Cox, Nuala O’Connor, Mary Favier, and Paul Ryan, are just some of the College’s pandemic medical heroes.

Fintan O’Toole takes the stage for his keynote address. Already themes are emerging: Inclusiveness; the plight of ordinary people in an increasingly autocratic world; and the unfairness of vaccine distribution and Ireland’s role in it all.

He says there is no clearer way of telling people they are unequal than denying them access to healthcare.

Now it is my privilege to chair a keynote address with my friend Mike Ryan (presenting via video link) from the World Health Organisation. He chooses to do a Q&A session with the audience and answers with the honesty and strength of character you would expect. The one question I never got to ask him, and the one everybody wanted me to ask was, did he know how much he was appreciated and how much affection and gratitude there was for him among the Irish healthcare community. I will ask it some day and before too long.

I know how big UL campus is so I brought my bike, whizzing through the midsummer parkland to the next event.

Crown beoir, a photographic exhibition about Traveller women of quite extraordinary quality is opened by Mary Favier, who speaks movingly about the health of Ireland’s indigenous minority. Mickey Dunne plays the uilleann pipes and reminds us that the instrument would be extinct were it not for Traveller musicians.

Emily Cullen, the UL Poet in Residence, leads a wonderful writing session where the participants just do not want to go home. Andrea Rochford, Roger Strasser, Andy Haine, Bruce Chater, and Claire Gerarda are all busily addressing meetings. They are all involved in the hard work of forming policy to improve the lives of rural healthcare workers and their communities.

Frank Fogarty is stylishly anchoring the ‘Red talks’ (short, powerful talks about an idea) while, in another theatre, Claire Collins from the ICGP is putting in a marathon session of presentations with her usual brilliance.

The concerns are universal: Lack of support; the shortage of successors; advocacy for our communities; how change should be from the grassroots up; and how nobody can speak for us without including us.

Open mike sessions in the festival fringe are hosted by GP, academic, and balladeer Ray O’Connor. He enthusiastically delights the visitors and the locals for hours with songs and stories and cajoles a performance out of everyone.

On the first night the music is provided by The Bluelight Smugglers.

The next night the Leddy sisters (who have entertained the rural docs for years) are joyfully joined by Luke Leddy and his band, the next generation taking up the torch.

Then it is time for continuing medical education (CME) tutors to give a keynote speech. I am delighted to recount the history of the CME small group learning network in Ireland and Michael Boland who was the founder.

He went on to be President of WONCA. His successor in CME, Annraoi Finnegan, such a great advocate for doctors in Ireland, was present. Stephanie Dowling, who has done so much first class research showing how small group learning is invaluable to new doctors and rural doctors, demonstrated how preferable face-to-face small group learning is to online learning. Claire McNicholas, who has been a vital organiser of CME for years, spoke on the structure of the network. CME is the great success story of Irish medical education and many abroad are keen to copy it. They get a practical demonstration when Karen Palmer and Laoise Byrne run a workshop in the form of a typical small group CME meeting. Attendees share their knowledge and experience from Germany, the US, England, Brazil, Scotland, Croatia, Canada, and Connemara. We have much in common.

I lead the shinrin-yoku walk with Helena Yu, Sean O’Connor, and Junko Oda. The trees and the river obliged to give us a transferrable workshop of mindfulness in nature for ourselves, our students, and our patients.

Then I am cycling over the bridge at treetop level where, far below, black cormorants stand cruciform on the rocks like Transylvanian vampires and a swan forages among the reeds, while her fluffy cygnets take swimming lessons from her snowy back. My band are on tonight – the Tipperary Thrashers. Hughie McGrath and I started the band years ago as a community music group. We are joined by CME tutors and master musicians Donnacha O’Cuill and John Lally.

Throughout the conference, Jerry Cowley carries his laptop around like the nuclear codes are contained within. The RIDDI and Limerick ‘declarations’ are being written. They are honed and polished between the sessions until they reach their final form and emerge.

Next, we are all out on the sunny grass with hurleys and sliotars. UL’s Peter Hayes, who has done such an incredible job curating the scientific programme, pucks like Shefflin, his cares forgotten. Along with Frank Fogarty, he sends sliotars high into the midsummer sky. The martial strains of Drumadore drum school play out the conference.

Among the drummers is Teresa Cowley, the presiding genius, who put the spirit, the music, the craic, and the culture into WONCA 2022.