One year on — the Ebola challenge 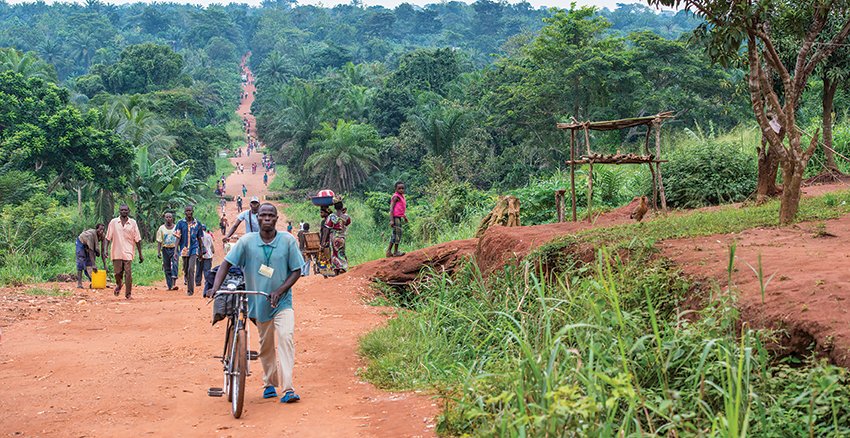 Karawa, Democratic Republic of Congo - August 24, 2013: An unpaved road in rural Congo, a lot of people are walking on the road which connects two villages in the province of Equateur. Walking and bicycling is nearly the only way of transportation in the poor regions of Congo. Mostly women are carrying heavy loads of goods on their heads when they are walking to a market place.

August marked one year since a new outbreak of Ebola was declared in the Congo. David Lynch examines national and international reactions to the crisis over the past 12 months

“The disease is relentless and devastating.”

This is according to the World Health Organisation (WHO) Director-General Dr Tedros Adhanom Ghebreyesus in a statement marking the one-year anniversary of the most recent outbreak of Ebola in the Democratic Republic of Congo (DRC).

During the summer, the WHO declared the ongoing situation an official public health emergency of international concern (PHEIC).

According to the WHO, over the last year there have been more than 2,600 confirmed cases, including more than 1,800 deaths in parts of Ituri and North Kivu provinces. Almost one-in-three cases involves a child.

Dr Tedros saluted the “heroic efforts of the mostly Congolese healthcare workers on the front line, the people of affected communities and partners. Despite their ceaseless work, the disease continues to spread.”

“This outbreak is occurring in an active conflict zone, which makes an effective response far more complicated because of insecurity, including armed attacks on health workers and facilities, and population displacement. In some of the affected areas, violence is preventing us from reaching communities and working with them to stop further transmission.

“Now we must build on those achievements, but to do so we urgently need far more support from the international community. The Government needs more support than ever before. The public health response to an Ebola outbreak requires an exceptional level of investment.”

Ireland, like the rest of the international community, is reacting to the current crisis.

In 2014, the WHO declared a PHEIC during a previous outbreak of Ebola in the DRC, which was only lifted in 2016.

This newspaper has learned that the Department of Health never completed a promised review of Ireland’s response to this last international Ebola outbreak.

Instead, the review has been shelved and is now taking place as part of a wider review of emergency planning, a Department spokesperson told the Medical Independent (MI).

On numerous occasions between 2016 and 2018, the Department told MI that it has begun initial work on a specific review of Ireland’s Ebola response, with a date in 2017 initially earmarked for completion and publication of the report.

However, a Department spokesperson said that the review has been shelved.

“The proposed review of the previous (2014) PHEIC in relation to Ireland’s response to Ebola was not conducted,” they confirmed to MI.

“Following a restructuring of the management team in the Department of Health’s Protection Unit, the Department has identified two key strategic policy priorities — the development of a national communicable disease framework, and a review of public health medicine and services.

“Emergency planning, including Ireland’s response to Ebola and other public health priorities, will be looked at in this context.”

No date was given for the completion of this work.

The first day of August marked one year since the Government of the DRC declared an outbreak of Ebola virus in North Kivu province. In July, it was declared a PHEIC by the WHO.

In response to the latest PHEIC declaration, the Department spokesperson said that its Threats Co-ordination Group met on 25 July 2019 to discuss the Ebola outbreak in the DRC.

“Decisions as to the appropriate group/body to convene are dependent upon the particular incident(s) concerned, the extent of Ireland’s risk exposure and information provided nationally (ie, by the HSE, especially by the Health Protection Surveillance Centre (HPSC)) and internationally (ie, by DG Sante, at EU level).”

The Department told this newspaper that both it and the HSE’s HPSC remain in contact with their counterparts through the relevant EU networks/committees “such as the Health Security Committee and the European Centre for Disease Prevention and Control (including in both recent meetings and teleconferences).”

In June, Minister of State at the Department of Foreign Affairs and Trade with special responsibility for the Diaspora and International Development Ciarán Cannon told the Dáil that the current DRC outbreak “is an extremely difficult crisis to resolve,” given its epicentre is in a conflict zone.

He added that so far, Ireland has provided over €2.6 million to UN and NGO partners, both for outbreak control programmes in DRC, and for preparedness efforts in Uganda. These include support for community mobilisation, sanitation, health and hygiene promotion and health worker training.

“Officials from my Department are liaising with the US State Department, given the leading US role in the international response,” said Minister Cannon.

“Irish Embassies in Kampala and Dar es Salaam — which has responsibility for relations with DRC — are liaising closely with local partners and donors, as well as with Irish citizens in the affected regions.

The Department of Health has also engaged in a recent teleconference/webinar hosted by the WHO in relation to its recent declaration of a PHEIC.

“The Department is in receipt of regular updates on the situation in DRC from the HSE and liaises regularly with it in relation to developments,” said its spokesperson.

“It has also engaged with its colleagues in the National Office for Emergency Management in the HSE and the Department of Foreign Affairs in relation to the development of protocols regarding repatriation of Irish citizens and health workers.

“The Department briefs the Government Task Force on Emergency Planning on the situation in DRC at its meetings.”

The Department also told MI that it has been advised by the HPSC that the risk of Ebola coming to Ireland remains “low”. There have been no cases reported in Ireland.

Under the HSE’s Emergency Management Service 2019 Operation Plan, published earlier this year, it is mentioned that the HSE would be moving towards a “complete procurement process” for disposal of Ebola virus disease-contaminated waste.

An Executive spokesperson told MI that this process is near completion, with the preparation of the tender “in its final stages”.

This newspaper first reported in November last year that the Irish Government had made enquiries about access to the Ebola vaccine.

According to the Department of Health, the Merck vaccine currently in use in the Democratic Republic of Congo is an unlicensed, genetically-modified product. Ireland has shown interest in obtaining this vaccine sometime in the future.

“At a recent teleconference with the EU’s Health Security Committee, Ireland signalled its interest in using the EU’s Joint Procurement Arrangements to obtain access to the vaccine once it becomes licensed,” a Department spokesperson told MI.

Last month, the WHO said in a statement that it welcomed “the results of the first-ever multi-drug randomised control trial in the Democratic Republic of the Congo aimed at evaluating the safety and efficacy of four drugs used for treatment of Ebola patients”.

“Two out of the four drugs being tested are more effective in treating Ebola and will bring patients a better chance of survival.”