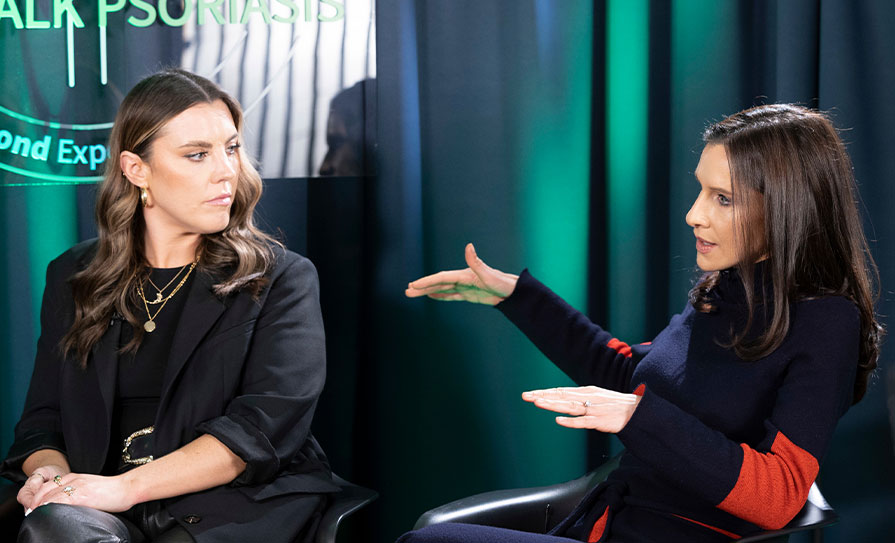 Sarah Hanrahan, who lives with psoriasis, and Prof Caitriona Ryan from the Institute of Dermatologists pictured on set for the PsO Let’s Talk Psoriasis video and podcast series by Janssen Sciences Ireland UC

Yet the everyday reality of living with the chronic inflammatory skin disease, and its telltale itchy flaky scales, can often be the aspect most patients are concerned about.

Simple daily tasks that others take for granted, such as washing their hair or choosing which clothes to wear, present unique challenges for the psoriasis patient. It is little wonder that the Google search “how to cure psoriasis” throws up some 40 million results.

For those with moderate-to-severe forms of the disease, access to specialist dermatology care is a critical step in taking control of their psoriasis.

Yet expert advice can be difficult to avail of, given that people living with skin conditions, including psoriasis, are experiencing some of Ireland’s longest delays to access specialist care.

Janssen Sciences Ireland UC have sought to support people with psoriasis while they wait to access care with the release of a new video and podcast series for patients, PsO Let’s Talk Psoriasis.

The series offers expert guidance from leading Irish dermatologists to help people manage their psoriasis while they wait to access specialist care.

Content for the four episodes in the series has been informed by feedback from people living with psoriasis in Ireland, who highlighted the need for information and support while awaiting a specialist appointment.

Launched in May this year, already it has become an invaluable resource that GPs and other healthcare professionals can share with patients and their families.

The second episode in the series sees Prof Caitriona Ryan, Consultant Dermatologist at the Institute of Dermatologists, explore some of the main queries and concerns patients have when it comes to living with psoriasis, and serves as a valuable guide to daily management of the condition.

For example, Prof Ryan outlines how one of the most visible forms of psoriasis is scalp psoriasis; it is also the most common, affecting about 50 per cent of people with the condition.

Even choosing what to wear can be guided by the disease – some patients will not wear black or navy clothes because of the flakes, for example, she says.

Prof Ryan notes that the scalp is one of the itchiest places to have psoriasis. “It’s so hard for [patients] not to scratch as it’s so itchy and often they can do it without even knowing… people wake up with blood on the pillow.”

This means the biggest issue when managing scalp psoriasis is the so-called “Koebner phenomenon”, Prof Ryan explains that when the skin is traumatised, more psoriasis will grow in the cuts, exacerbating the condition.

She also points out that patients can often be “doing the wrong things”, such as using exfoliants on the scalp and using combs to try to remove the scales. “That’s just throwing fuel on the fire.”

Psoriasis can present challenges in many aspects of life, and when people are planning a family there are a number of things for a person to consider, like conception, pregnancy and breastfeeding.

According to Prof Ryan, studies have shown that women diagnosed with psoriasis tend to have fewer children however, her belief is that this is symptomatic of the intimacy issues that many people experience as a result of the disease.

“The most important thing for women who are planning to get pregnant is that they can absolutely still treat their psoriasis.

There should be absolutely no reason not to get pregnant or not to treat it.

Often as women, having babies, it’s a time where we are so selfless in our choices and we don’t want to do anything that may harm our precious baby and it’s completely understandable, but there are lots of treatments that are safe and compatible with pregnancy.”

Hence, there is no need to make a choice between pregnancy and a subsequent flare-up of the condition, Prof Ryan stresses.

“When it comes to pregnancy planning and pregnancy itself, we have lots of different options that are compatible with that. We just need to have a plan.

This is really important because some women don’t come for treatment because they are planning on having children and they feel that this is more important than treating their psoriasis.”

However, she also notes that some 50 per cent of pregnancies are unplanned, and some treatments are contraindicated during pregnancy, therefore, this is an important conversation she must have with all her female patients, starting during their teenage years.

“I have to explain that if they are on a drug they shouldn’t get pregnant on, then they have to have contraception on board.”

Another issue is that women believe they won’t be able to breastfeed while taking psoriasis medication – this is another misconception, Prof Ryan says. “They certainly can – we have medications for them to take that don’t get into the breastmilk.”

Interestingly, there appears to be some interplay between female hormones and the presentation of psoriasis.

Prof Ryan notes that women tend to develop the disease at a later age, a “post-menopausal peak” – this appears to indicate a potential protective effect of female hormones.

Indeed, for many women, their psoriasis improves greatly during pregnancy.

“In the second and third trimester, for two-thirds of women it improves dramatically and then six weeks or so after giving birth they tend to have a flare-up, but we are ready for this.”

And while psoriasis in females isn’t typically as severe as that of males, when it comes to quality-of-life, they tend to be more significantly impacted.

“Their anxiety and depression levels are worse. We see a difference in how it presents, but also in the way that women respond to it and interpret it.”

However, she notes that men can be deeply impacted by the appearance of their psoriasis – they may just not admit it. “Men are afraid of appearing vain and they don’t tend to have the same support system as females. We as practitioners need to be aware of that.”

Caring for your skin with psoriasis

Ms Daly has over two decades of experience in working with psoriasis patients to help and educate them as they manage their condition.

While most of us wash and go, this isn’t an option for the psoriasis patient, and a careful regimen must be adhered to.

Ms Daly explains that total emollient therapy is the cornerstone of psoriasis self-management – this includes a soap-free, fragrance-free wash for showering and shampooing. She also advises using tepid – not hot – water, and to gently pat the skin dry afterwards.

A topical steroid, prescribed by the GP or Consultant Dermatologist, then follows.

“Apply a thin glistening layer to the affected area and slightly outside of it – this will ensure that you are treating it effectively,” Ms Daly advises.

She also notes that while these may be used twice a day at the peak of a flare, as the skin improves, this can be tapered down.

“You never just stop a steroid – you always reduce it down extremely slowly. The research tells us when we do it in this fashion, we tend to get fewer flares of the condition.” Weaker steroids are usually most effective on the face, while stronger ones are needed for the trunk and limbs.

An emollient, such as Silcock’s base or paraffin gel, is then applied after the steroid, to hydrate the skin and improve hardened skin, although Ms Daly suggests coconut oil for the scalp to soften the flakes there.

The multistep routine may appear onerous, but all these steps all work in tandem, Ms Daly emphasises. “You can’t leave one of these out – it’s like making a cake, you need all the ingredients, otherwise you haven’t got a cake.”

She also advises people to use plenty of their chosen emollient, noting that they should be going through two 500g tubs each week if using it for both washing and moisturising.

“People are shocked when they hear that, but you will go through this if you are using enough of it.”

It is important for patients to remember that psoriasis is simply a disease where the body produces too much skin, she points out.

“The skin cells are immature, they don’t look like ‘normal’ skin cells, they are white and flaky and that’s what produces the scales.

But if you have been prescribed topical therapy for your psoriasis, it will not work as effectively if there are scales present.”

PsO Let’s Talk Psoriasis is available free of charge online at www.janssenwithme.ie/pso/ resources/pso-lets-talk-psoriasis. The podcast audio versions are also available wherever you access your podcasts.