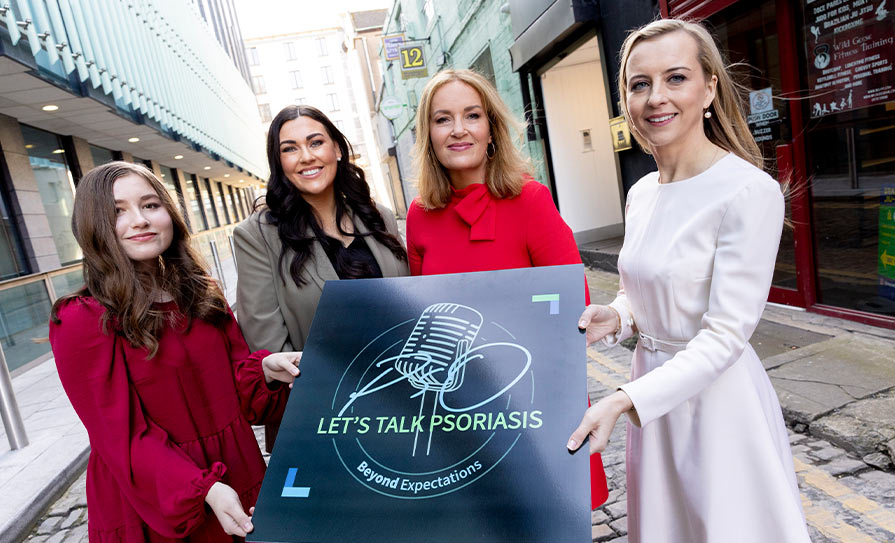 A chronic, systemic, immune mediated skin disorder affecting at least 73,000 people in Ireland and approximately 125 million people worldwide, psoriasis does not discriminate and can occur at any age, affecting children as well as adults.

Indeed, up to 1 per cent of children and adolescents may be living with this chronic and challenging skin condition, which can cause thick scaly skin plaques on visible areas of the body at a time of intense growth and development.

The good news is that the range of treatments for paediatric psoriasis has been growing, with many of the treatments effective in treating the adult form of the condition now licensed for children and adolescents. Yet understandably, for those children and their parents, the development of psoriasis can be a distressing and anxious time.

And while a GP may initially diagnose the condition, some families only receive a diagnosis when they eventually see a specialist paediatric dermatologist, during which time concerns and worries can intensify.

Janssen Sciences Ireland UC this year launched the first series of its kind to offer access to guidance from leading healthcare professionals to help people manage their psoriasis while they wait to access specialist care.

PsO Let’s Talk Psoriasis is a video and podcast series that has already been viewed and downloaded thousands of times since its launch in May this year.

Paediatric psoriasis is the focus of the third episode in the series, which sees experts address some of the biggest concerns of parents of children living with psoriasis, such as how to manage psoriasis in children and their treatment options, as well as practical issues, such as speaking about psoriasis to teachers and friends, and the transition from paediatric to adult care.

The episode also sees the panel of experts answer some of the most common questions posed by parents.

Dr Maeve McAleer, who is a Consultant Dermatologist at St James’s Hospital and Children’s Health Ireland, notes that psoriasis is a relatively common inflammatory skin condition in children and it can present similarly to how it does in adults, albeit with some distinct differences.

Just like with adult psoriasis, “patients have very well demarcated plaques – you can almost draw a line between the affected skin and the unaffected skin,” Dr McAleer explains.

“Psoriasis likes to pick out areas such as the elbows, the knees, the scalp, and the body folds. In some patients it can be small areas, whereas for others a large portion of their body can be affected.”

Psoriasis in children can sometimes spontaneously resolve after a few months, an outcome that is not typically seen with the adult form of the condition, Dr McAleer adds.

In terms of its appearance, it can be far more subtle. Children’s plaques can be thinner, with less of a scaly appearance – conversely, this can make the diagnosis somewhat trickier in children. “Psoriasis in babies can even present as a troublesome nappy rash,” she says.

She also cautions that atopic dermatitis will have an “intense” itch associated with it, which affects sleep, whereas psoriasis patients tend not to be as itchy. “Children with psoriasis only have mild itch and it doesn’t typically affect their sleep.”

The first port of call for a concerned parent should be their GP, says Fiona Lawlor, Clinical Nurse Specialist in paediatric dermatology at Tallaght University Hospital. She says this should set the patient on the correct treatment pathway.

“Hopefully they will be able to give them a diagnosis, but psoriasis can be hard to differentiate so at that time if they don’t get a diagnosis, the GP will then send a referral to a dermatology department and they will get to see a specialist eventually.”

Ms Lawlor also highlights the crucial role played by the specialist nurse as part of the dermatology team looking after the psoriasis patient. “It is the dermatology nurse’s role to provide education and advice to caregivers and patients when it comes to managing their psoriasis,” Ms Lawlor says.

“We set them on the right track – knowledge is power for parents.” She adds that the parents and children and teenagers she sees are often stressed – by the time they reach the dermatology clinic, they may have been on a waiting list for quite some time.

“It’s heartbreaking for us, so we try to do everything we can to help them. It’s about giving them the tools to manage it and empower them through education.” This can range from determining which emollient would best suit their skin, to demonstrating exactly how to apply it.”

Indeed, emollient therapy can be under-used, adds Ms Lawlor. “It’s really important to maximise the use of them because itch may not be the biggest issue, but it can still get itchy.” Dr McAleer adds that many studies have shown that even emollients by themselves can improve psoriasis, but acknowledges they can be messy and time-consuming in their application. “The best emollient for you is the one you will use.”

It is such a critical stage in their physical and emotional development. There are so many milestones that they have to hit in those years… we need to be very aggressive with children and young people in treating it, because the impact on their development can be massive so I would be very aggressive in trying to control it.”

Dr McAleer is quick to highlight the positives – with numerous treatment options available, the odds that the psoriasis can be effectively cleared are higher than ever.

Treatment options for paediatric patients include topical therapies, phototherapy, and systemic therapies including methotrexate and many of the biologic therapies.

Dr McAleer says one of her first jobs is to reassure families that psoriasis is a treatable condition.

“We have a range of medications and we will work through them in a systematic way, depending on the extent of your disease, and we will be able to control your psoriasis so that there is minimal psoriasis.”

Parents may be concerned about side-effects; to this, Dr McAleer says, “there are side-effects to doing nothing too.”

“We are very lucky in psoriasis – we are in an age now where we can treat successfully and manage the disease. There is no cure, but I think it’s very important that children and young people know that we can manage this.”

PsO Let’s Talk Psoriasis is available free of charge online at www.janssenwithme.ie/pso/resources/pso-lets-talk-psoriasis. The podcast audio versions are also available wherever you access your podcasts.