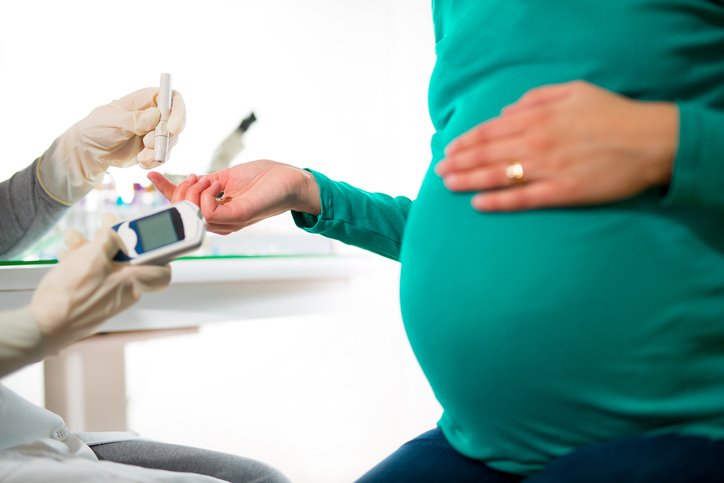 A close-up of a pregnant woman having her blood sugar/ glucose checked.

Better approaches to detecting gestational diabetes mellitus (GDM) are needed given the increasing burden of this condition globally, the IES 2020 Annual Conference heard during the opening research-based oral communications session.

These guidelines have been widely adopted within the UK yet the identified risk factors perform poorly as predictors of GDM (the positive predictive value (PPV) of BMI for GDM in the SHAPE study was just 20.8 per cent) pointed out Dr D’Arcy.

“Perhaps of even greater significance is the fact that GDM pre-disposes the infant to increased risk of obesity and type 2 diabetes. So essentially what you end up with is a vicious cycle of transgenerational obesity risk whereby an obese mother develops GDM and gives birth to an infant also at elevated risk of obesity and the cycle continues. Given the prevalence of GDM there is an enormous public health advantage to mitigating that risk,” he told the meeting.

Dr D’Arcy outlined the results of a study where he and his colleagues assessed the use of early pregnancy HbA1c measurement in predicting excessive foetal growth in women at risk of GDM. “The use of HbA1c in the first trimester would offer some practical advantages [over OGTT]; there is no requirement to fast, it is cheap, reliable and widely available.”

In this prospective cohort study HbA1c was measured at <14 weeks gestation in 948 women at risk of GDM (Covid-19 affected the recruitment target of 1,600 women as the study had to be terminated six months early).

Comprehensive foetal biometry by ultrasound was performed at 28 weeks alongside 75g OGTT. GDM was defined using World Health Organisation (WHO) criteria. Almost one-in-five of the cohort, 186 women (19.6 per cent), screened positive for GDM.

The second study outlined by Dr D’Arcy took account of the weak predictive value of BMI as a risk factor for GDM/metabolic risk, and the fact that the increased health risk of visceral adiposity compared to subcutaneous, ie, thigh and buttock, fat is now well established.

The difference in cytokine expression between these two types of fat likely goes some way to explaining their differential effects on risks, he suggested.
Dr D’Arcy and colleagues sought to assess the performance of ultrasound measured maternal visceral adipose tissue depth (VAD) as a screening tool for GDM prediction. This is a straightforward assessment, which takes around five minutes to perform.

In a nested observational study, Dr D’Arcy and colleagues measured VAD using ultrasonography at <14 weeks gestation in 123 women identified as having at least one NICE risk factor for GDM. All women underwent a 75g OGTT at 28 weeks’ gestation, which was analysed using WHO criteria, and 26 women (21.1 per cent) developed GDM.

Women exceeding this threshold in the first trimester were at seven-fold greater odds of later GDM diagnosis (OR 7.0) the study found. The use of this VAD threshold in this cohort increased PPV to 58.7 per cent with an NPV of 90.9 per cent.

Ultrasound measured VAD is an easily performed and effective tool for the prediction of GDM in at-risk pregnancies, the study concludes. “The VAD is superior in performance to both BMI and the other NICE risk factors in general. Further research is required to establish the role of VAD measurement in broader cohorts of pregnant women,” Dr D’Arcy said.