Time for a festive feast 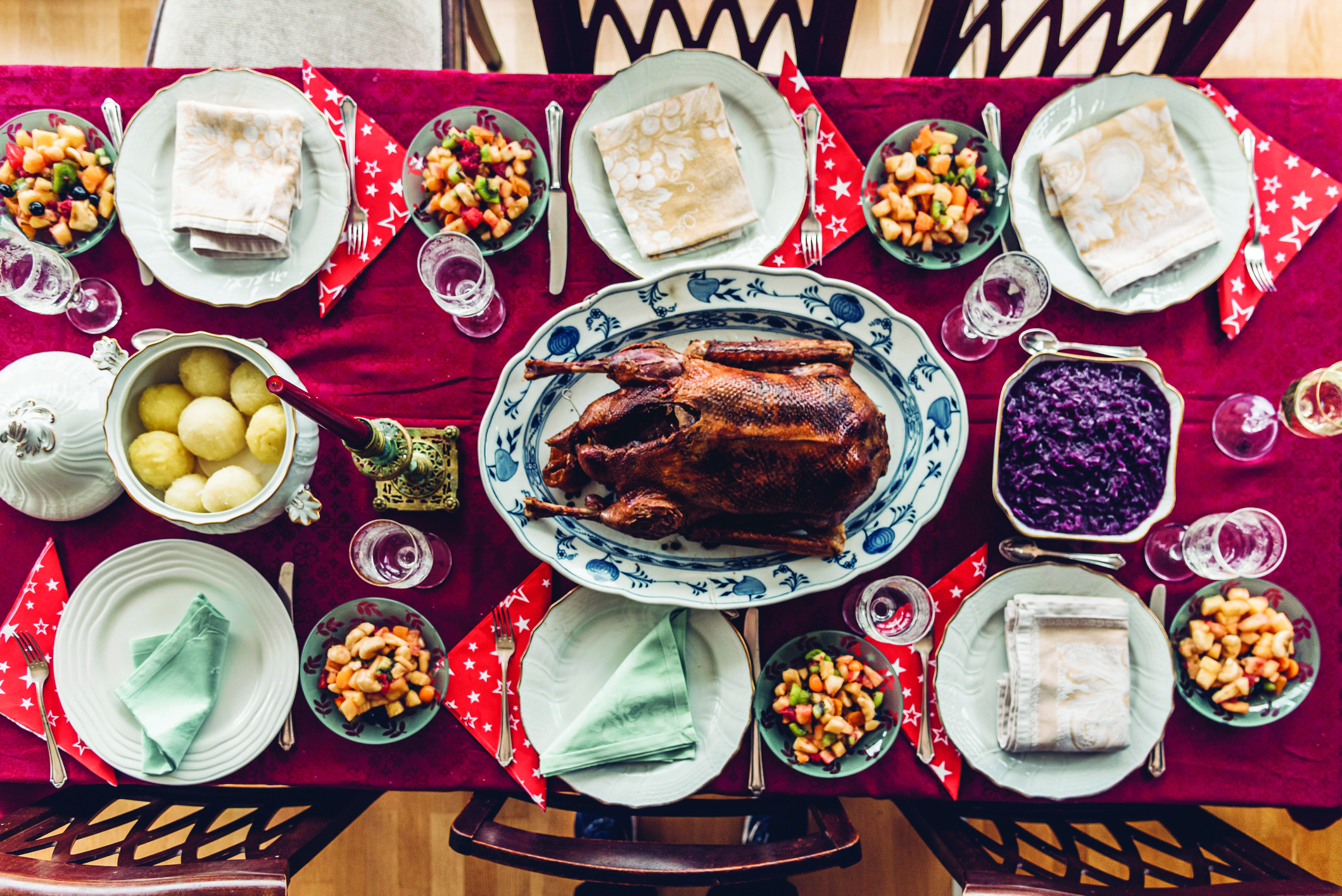 I’m always amused when I read stuff about ‘how to have a stress-free Christmas’. They always assume that you want to create a monstrous feast comprising dozens of elements and the solution, it’s suggested, is just to do lots of planning and to execute everything with military precision.

The only really useful advice seems to be to prep your vegetables the day before, but I think we’ve always known that. Now that Johann and I are well beyond the Santa Claus years and look forward – more in hope than in expectation – to having some or all of our three grown-up children home for Christmas, we are trying to keep it simple.

Within reason, of course.

We are not turkey enthusiasts at the best of times, preferring goose or a rib of beef. If we’re going to be home alone, these will turn into a modest Skeaghanore duck or a côte de boeuf from Frank Murphy in Midleton.

There will be truffles, a recent tradition that, for us, underlines the feasting nature of the season. And the rare wild smoked Atlantic salmon from the brilliant Sally Barnes’s Woodcock Smokery in West Cork.

Christmas pudding? We’re a bit agnostic about it as we have three children who grew up detesting raisins, sultanas, and currants, and so our Christmas “pudding”, so to speak, has long been profiteroles filled with whipped cream and topped with melted dark chocolate. Green & Black’s Maya Gold adds a suggestion of seasonal spice.

But what of wines? We’ve tended to avoid opening anything very special, old or rare on Christmas Day given the frenetic activity with which it’s associated. The sort of stuff that you have been keeping for a special occasion?

This is not the right special occasion. There are too many distractions and I think most of us, if being wholly honest, will confess that quantity, to some extent, trumps quality on Christmas Day. If ever there was a time when the sedative effects of alcohol are required, it’s after cooking Christmas dinner.

White Burgundy or Champagne with the smoked salmon would be our mantra. And if you take what you would spend on a big brand of the latter and splash it on the former you will have something stunning.

Actually, you could save a few bob. Consider the Domaine du Colombier Chablis Grand Cru Bougros 2018 (€50 from whelehanswines.ie), whereas a bottle of – admittedly lovely – Bollinger NV will set you back €65.

Alternatively, you could have the delicious Domaine Guerrin & Fils Mâcon-Vergisson Les Rochers 2019 for €24 (Whelehan’s again) and have a bottle of the unusual Philizot Champagne Blanc des Noirs – all Pinots – for €29.95 from Aldi. Tesco Finest Vintage Champagne 2012, with lovely bottle-aged character, is another snip at €34.32.

With duck or goose, I like a wine with something of a cherry character and proper – I stress proper – Chianti usually does the trick. Mazzei Fonterutoli Chianti Classico 2017 is a bargain at €26 from 64 Wine in Glasthule, Blackrock Cellar, The Grapevine in Dalkey, and Sweeney’s in Fairview.

I’ve been known to cook our rib of beef on a Weber barbecue under an umbrella in beating rain on Christmas Day. Nothing else delivers the same degree of smokiness on the honeycombed crisp fat. The only downside – and it is a sacrifice – is the lack of gravy.

Sometimes I will roast beef bones and use those, but they don’t seem to deliver the essential graviness, so to speak, that you get from the gunge in the bottom of the roasting pan.

We like it pretty rare and are inclined to go one of two ways in terms of wine. Luscious, silky, and oaky – in which case we’re talking Ribera del Duero – or more restrained, poised, classic, in which case claret.

Bodegas La Horra Corimbo Ribera del Duero 2015 (owned by the legendary Rioja bodega, Roda) is a bargain at €33 when compared to some of the more famous names in that area. It’s big, but light on its feet, so to speak, and it has a certain elegance (possibly down to 80 per cent French oak to 20 per cent American). It’s available from Blackrock Cellar, The Vintry, Deveney’s, Redmond’s, Sweeney’s, and Martin’s.

Taking the claret route, I fancy Château Clarke 2012, a cru bourgeois from Listrac-Moulis in the heart of the Haut-Médoc with enough bottle age to have softened the generally tough tannins of this sub-region and to release a lovely subtle complexity. In a blind tasting you could be forgiven for not believing that it costs only €36.35 from O’Brien’s.

I’m told that the port trade does 90 per cent of its annual business during Advent. It seems that most of us contemplate this fortified wine only when we have lots of people around the table – probably because of its staggering alcoholic strength and moreish character.

Of course, there’s port and port. A lot of ruby and late bottled vintage ports are pretty raw and taste merely sweet and grapey. The interesting stuff has undergone gentle oxidation, either from a very long time in the bottle or, rather more expeditiously, through lengthy ageing in wood.

These are true tawny ports (and the very rare colheitas), so named because their deep, dark colour becomes a brickish red with time. They are labelled with an average age of between 10 and 40 years so they are inevitably blended from very young and very old wines. Their great advantage over full-blown vintage ports is their accelerated maturity and the fact that they don’t throw a sediment, thus not needing to be decanted.

Taylor’s Ten Year Old Tawny Port (around €30 from independents) is a fine example of the style with typical dried fruit character, while Graham’s 20 Year Old Tawny (€49.19 from SuperValu) is sweeter, a little more raisiny and longer. Maynard’s 40 Year Old Tawny Port (€39.95 from Aldi) is from the family who used to own Quinta do Noval, one of the greatest port producers. Its length is astonishing.

I’m fortunate to have some old vintage ports (payment in kind for selling a rather grand cellar many years ago) so am inclined to think of anything from the 1990s or later as “a bit young”. I can confirm from personal experience that Dow’s Vintage Port 1985 (€150 from Searson’s in Monkstown) is sublime if you’re so inclined.

You need to stand it upright for a day or two and decant very steadily, leaving the substantial sediment in the bottle. This is not even as easy as it sounds and explains why fine tawny ports are so much more popular.

Quinta do Crasto Late Bottled Vintage Port 2015 (€25.75 from winesdirect.ie) is, most unusually, unflitered and has a modest sediment. Attractive now, it will develop for another five years, perhaps more.

As to what goes with really good port, blue cheese is the tradition, especially Stilton, but I would enter a plea for our very own Crozier Blue from Tipperary, an Irish take on Roquefort. However, it’s perhaps even better with a very intense cheddar, such as Coolattin from West Wicklow. Walnuts and port have a great affinity and dark chocolate works well too, especially if more savoury than sweet.

If you have managed to read this far you will have put me down as a hidebound traditionalist. Well, it’s true, but only when it comes to Christmas. There are good reasons why traditions grow up and, for this year at any rate, I won’t rock the boat and, instead, wish you all a very happy and safe Christmas, and a New Year quite unlike the one we’ve just had.