An appreciation of olive oil 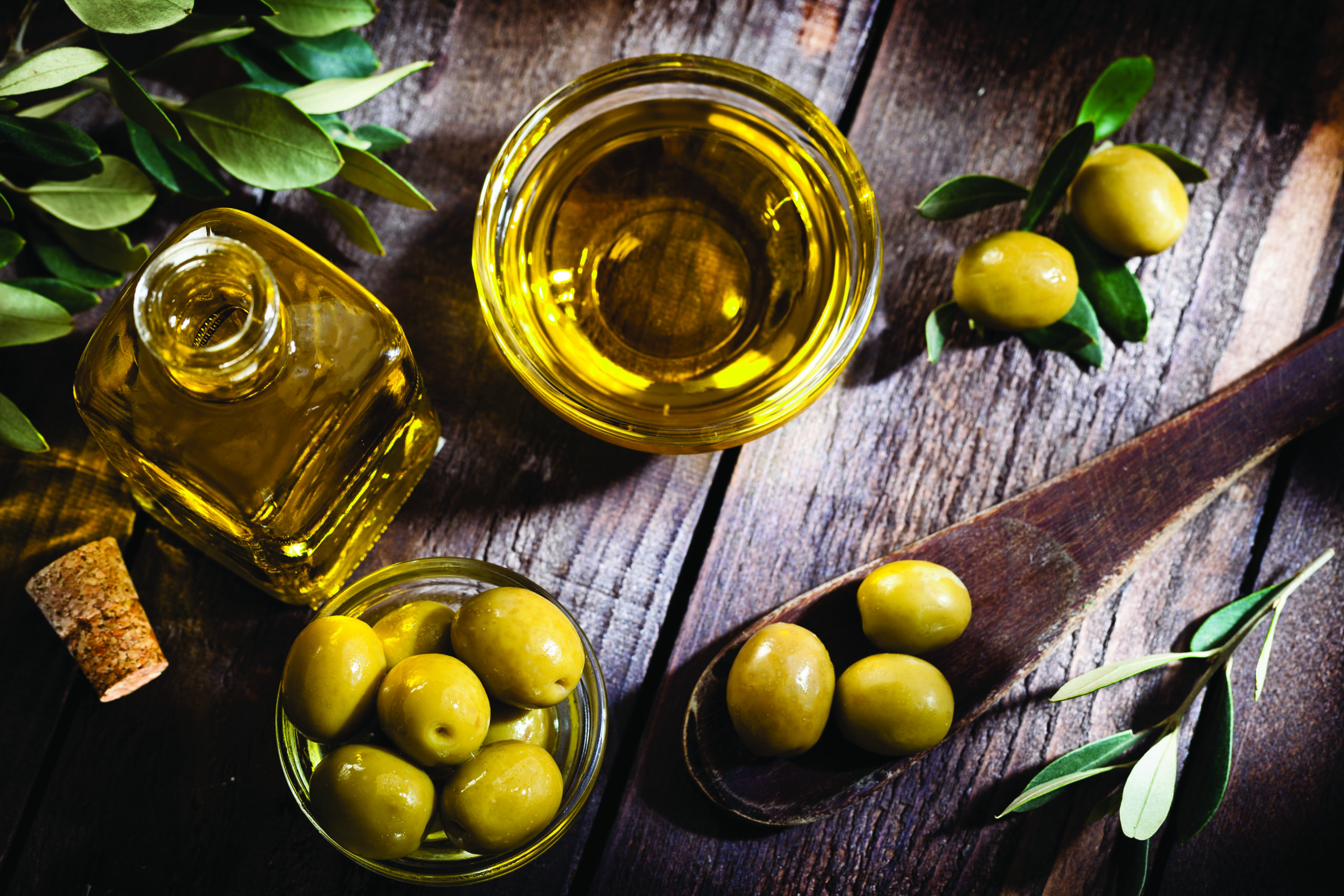 Top view of an olive oil bottle and a little glass bowl filled with green olives on rustic wood table. Two olives with leaves are at the top-right while a bowl filled with olive oil is at the center-top beside the two olives. An olive tree branch is at the left-top corner. A wooden spoon with three olives comes from the right. Predominant colors are gold, green and brown. DSRL studio photo taken with Canon EOS 5D Mk II and Canon EF 100mm f/2.8L Macro IS USM

Just as there are wine snobs, there are olive oil snobs. When I was growing up, my mother used to buy Goodall’s olive oil in tiny bottles. I can still remember the attractive, fruity smell of this pretty basic stuff (we’re talking the early 1970s here) as it warmed in the pan. She was ahead of her time as far as cooking was concerned. At that stage most olive oil in Ireland came from the pharmacy and was used, warmed, to loosen stubborn ear wax.

And now, take a look at the shelves of a well-stocked deli and marvel at how many forms of it you can buy; and some of them are dearer than a lot of perfectly decent wine, litre-for-litre. Some even come in very small bottles, suggesting that they should be used by the drop rather than the glug. There are certainly people who can produce detailed tasting notes for individual olive oils and the language used is often much the same as is used to describe wine. Common phrases would be peppery, fruity, grassy, tomato leaves, nutty, green apple, floral, etc.

Our daily cooking oil is the basic olive oil from Aldi, not too strongly flavoured, but nice and stable and, as it happens, a very good base for homemade mayonnaise. The olive oils we use to dress salads and vegetables, to drizzle on grilled meats or on to burrata, are the serious stuff. We buy a Spanish organic extra virgin olive oil, five litres (roughly the yield from one tree) at a time, direct from the producer, Campillo de Julia near Jérica in Valencia. Through CrowdFarming.com this costs €65, delivered to Ireland. It is fairly pungent – peppery is the word that comes to mind, but there’s a fruitiness too, and it’s quite delicious and amazingly well-priced.

Mark Shannon, of Bistro One in Foxrock, usually bilocates between south Dublin and Tuscany where he has an olive grove of 100 trees. In normal times, when the olive crop is harvested, usually in early November, and it has been taken to the frantoia for pressing, Mark is on the next flight home with the first five litres and it is on the tables in the restaurant that evening. Sometimes I’m lucky enough to get hold of a bottle and I can report that it is superb. Brand new freshly-pressed extra virgin olive oil (EVOO) is an experience like no other. We occasionally buy Azouro EVOO from Portugal, green and fruity, which offers very decent value at €12.95 from Fallon & Byrne; and when we can get it, the EVOO from the very Fonterutoli estate in Chianti Classico, is a treat.

I really can’t quite understand the fuss people make about rapeseed oil. It has the advantage, I suppose, of being local, but I’m not attracted by the taste and I find it can develop a fishy aroma when heated. True, its omega-6 to omega-3 PUFA content is a desirable 2:1, compared to olive oil’s 9:1, while sunflower oil, which I avoid like the plague, weighs in at a rather shocking 40:1. The fact is that the Western diet is too rich in omega-6 and very light on omega-3 (hence the advisability of fish oil supplements for heart health).

Sunflower oil has a relatively low smoke point of 107ºC, as against 160ºC for EVOO and 177ºC for rapeseed, a chastening thought as so many people think of it as the healthiest option when deep-frying. When used for frying, it releases 20 times the amount of aldehydes considered relatively safe by the World Health Organisation. By contrast, saturated fats are relatively stable at high temperatures. Lard, for example, at 39 per cent saturated fat, comes out best for deep-frying, in good company with ghee or clarified butter with 50 per cent saturated fat. Goose fat and coconut oil, 27 per cent and 86 per cent respectively, are highly stable too. It is worth noting that refined olive oils (as distinct from EVOO) can have a smoke point in excess of 200ºC, and that Avonmore Irish Ghee, or clarified butter, has a smoke point of 210ºC.

Our armoury of fats in the kitchen is very traditional (well, depending on where in the world you are, but we consider ourselves to be global citizens). Our main cooking fats are butter and olive oil, but we also have a packet of James Whelan Butchers’ beef dripping in the fridge – essential for steaks and for Yorkshire pudding. On the very few occasions that we cook chips – usually birthday steak feasts, featuring Béarnaise sauce – dripping or lard is the fat of choice.

We usually have some goose or duck fat knocking around but, to be honest, I often forget to use it. Yes, it knocks out a serious roast potato, but so does beef dripping, and – a Richard Corrigan trick – a mixture of butter and olive oil.
It is interesting to compare the ingredients of a pack of butter and a pack of “spread”. The butter contains cream and salt, the spread has water, plant oils (30 per cent) (sunflower, palm, linseed, rapeseed), plant stanol esters, salt, emulsifiers (monoglycerides and diglycerides of fatty acids, sunflower lecithin), natural flavourings, vitamins A and D.
Butter is, of course, naturally rich in vitamin A and D, plus E, B12, and K2.

But, much more to the point, butter is naturally delicious. Imagine melting that “spread” over a new potato? Or having the first of the new season asparagus with “spread”. Can you even make a Béarnaise with “spread”, if you were deranged enough to try?

Domaine Langlois-Chateau Vieilles Vignes 2018, (€26.95, O’Briens) is an old vine Chenin Blanc from Saumur in the Loire, made by uber-posh Champagne house, Bollinger and with the attention to detail that such parentage would suggest. This still wine is a dry, yet honeyed, stunner with supreme elegance and clear complexity, a most attractive reminder of how this grape makes some of the world’s greatest white wines. You certainly won’t find a Burgundy this good for anything like this price. My first choice would be black sole with beurre noisette. Simple tastes, eh?