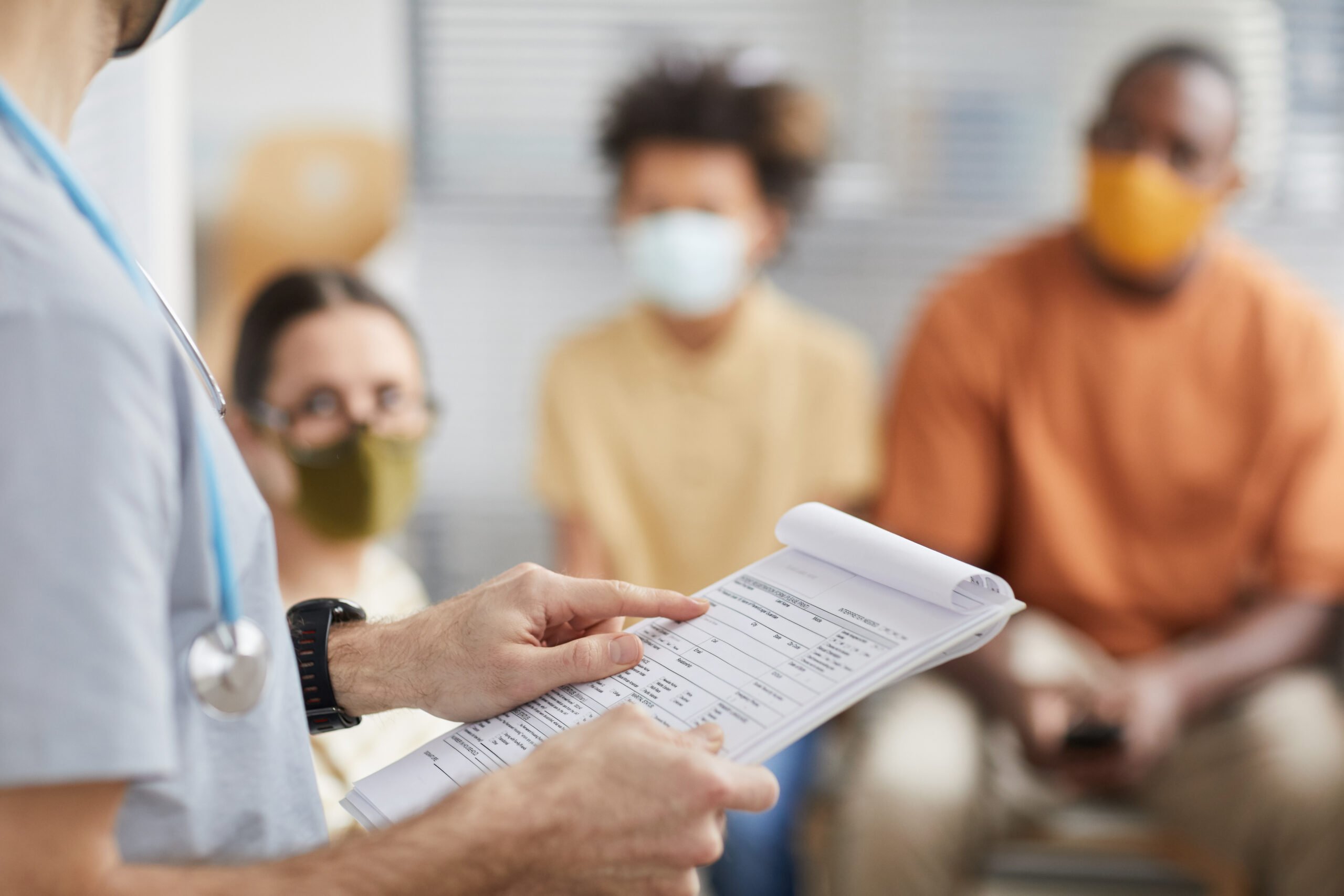 Close up of male doctor holding clipboard while talking to patients waiting in line at medical clinic, copy space

With waiting lists getting longer, there is renewed focus on the work of the scheduled and unscheduled care performance unit in the Department of Health. David Lynch reports

The Department of Health’s scheduled and unscheduled care performance unit (SUCPU) is working with the HSE and the National Treatment Purchase Fund (NTPF) in putting in place plans to improve access to elective care and reduce waiting times, the Medical Independent (MI) has been told.

These plans include “increased use of private hospitals, funding weekend and evening work in public hospitals, funding ‘see and treat’ services where minor procedures are provided at the same time as outpatient consultations, providing virtual clinics, and increasing capacity in the public hospital system”. The unit was established in 2017 (see panel). However, its recent performance came under significant recent criticism.

Reacting to figures in May that showed over 880,000 people were “now on some form of NTPF waiting list”, the IHCA questioned the work of the unit and the challenge of growing waiting lists.

“By any standards this is a very disappointing performance,” IHCA President Prof Alan Irvine said in May. “The… unit [SUCPU] should be an imaginative solution-focussed hub and incubator for new ideas.”

“This requires shared leadership and collaborative engagement with hospital consultants who provide the medical and surgical care and their representatives to ensure an improved public hospital service for the Irish people.”

Prof Irvine added that “in the 42 months since it was established… the SUCPU has overseen a ballooning of numbers on outpatient waiting lists from around 500,000 to 630,000”.

“Every single one of these numbers represents a person and a family seeking healthcare; every single request will be reviewed and triaged by our members, who know better than anyone the professional disappointment of being unable to offer a timely appointment to a person in need of care for, in many cases, several years.”

The IHCA President called on the Minister for Health to provide leadership on the waiting list issue and he linked problems to ongoing challenges with consultant recruitment and retention. “Minister [Stephen] Donnelly must confirm the date when his unambiguous commitment to restore pay parity for consultants will take effect to end the inequity imposed unilaterally on those taking up contracts since 2012.

“This is essential if we are to fill the one-in-five permanent consultant posts that are vacant and start to bring waiting lists down.”

In relation to the recent work of the SUCPU, a Department spokesperson told MI that “before the events of the last 16 months [pandemic and cyberattack] significant progress had been made” in reducing inpatient and day case waiting lists. According to figures provided by the Department, in the period from July 2017 to the end of December 2018, the total number of patients waiting on the active inpatient/daycase waiting list reduced by 15,907 (18 per cent) from 86,111 to 70,204. This reduction was most apparent in the number waiting more than nine months, which reduced by 13,214 (47 per cent).

“Following the outbreak of the Covid-19 pandemic, waiting lists reached a peak in May 2020 due to the need to defer non-urgent elective care,” said the spokesperson.

“However, as a result of modified pathways to care and utilising innovative methods of providing scheduled care, the growth trend in the IPDC [inpatient and daycase procedures] waiting list was reversed and the number waiting for a hospital appointment/procedure dropped by 8 per cent from the end of May 2020 to the end of March 2021.”

However, the spokesperson did warn that the recent cyberattack on the HSE is expected to lead to an “increase in routine waiting lists, as the HSE is currently focusing on urgent and time sensitive cases in the interests of patient safety”. The Department told MI that a sum of €240 million has been provided in Budget 2021 for an access to care fund, €210 million of which has been allocated to the HSE and a further €30 million to the NTPF.

“This will be used to fund additional capacity to address the shortfall arising as a result of infection control measures taken in the context of Covid-19, as well as addressing backlogs in waiting lists.” The recruitment of consultants is part of SUCPU’s plans, the Department said.

“These plans are part of the Sláintecare initiatives, which aim to increase the capacity in the public healthcare system to the levels envisaged in the Health Service Capacity Review, which was published in 2018,” said the spokesperson. “They will entail continued recruitment of additional staff across a wide range of disciplines, including the filling of consultant posts.”

The Department said that the combination of the pandemic and more recent cyberattack had impacted the work of the unit. In relation to unscheduled care performance, the Department spokesperson said that the unit is responsible “for oversight, monitoring, and reporting of performance improvement in relation to unscheduled care in acute hospital emergency departments and the development, implementation, oversight, and review of initiatives to improve access to emergency departments including winter preparedness initiatives”.

The work of the SUCPU “focuses on those areas where demand for acute hospital services is most apparent”. “As such, it deals with a wide range of issues relating to these services, including in 2020 and this year with the major disruption to services caused by the Covid-19 pandemic and the recent ransomware cyberattack.

“Both of these events have had a major impact on patients seeking to use scheduled and unscheduled care services.”
Last month, the IMO warned of the “devastating impact of Covid-19 on waiting lists”, particularly with cancer services. Dr Clive Kilgallen, Chair of the IMO consultant committee, and Dr Denis McCauley, Chair of the GP committee, were speaking at the Oireachtas Health Committee.

Dr Kilgallen said that “in March and April 2020, during the first wave, rapid access clinics for breast and lung cancer saw referrals fall by a third and referrals for prostate cancer fall by half. While referrals have recovered, they remain significantly below 2019 levels particularly for lung and prostate cancer.” He added that “many patients” experienced delays in accessing services and that cancer screening programmes have also been affected.

Under the bonnet of the SUCPU

The scheduled and unscheduled care performance unit (SUCPU) was established at the end of 2017 as part of the governance and performance division in the Department of Health. According to figures provided to the Medical Independent (MI), the unit currently has 12 staff. It is led by a Director reporting to the Deputy Secretary with responsibility for governance and performance. The current Director is Mr David Smith.

“Its purpose is to monitor and evaluate the HSE’s delivery of services in hospital emergency departments and the HSE’s and NTPF’s performances in delivering non-urgent acute hospital scheduled care,” a Department spokesperson told MI.

“Its role in relation to scheduled care is to monitor and evaluate performance in relation to access to acute hospital care and associated waiting lists, working with both the HSE and the NTPF to implement policies and initiatives to increase capacity and source additional activity to alleviate waiting times for scheduled care. It is also responsible for governance oversight of the NTPF.”

In May, the IHCA warned that despite the existence of the SUCPU “an additional 130,000 people are now awaiting an outpatient appointment to see a consultant – an increase of 26 per cent over the past three and a half years since its establishment”.

The IHCA said the low number of consultants, due to the difficulty in filling permanent consultant posts,
“is the root cause of the unacceptably long waiting lists.” MI asked the Department whether the SUCPU’s work replicates or crossovers with any of the work performed by the HSE’s special delivery unit (SDU)?

“No… [the SUCPU] monitors and reports on the performance of emergency departments in acute hospitals. The unit also provided support and advice to the Minister in carrying out his statutory duties in relation to unscheduled care,” said the spokesperson.

“The unit provides frequent reports and advice on unscheduled care performance to the Minister and other stakeholders. The unit liaises with the SDU and other counterparts in the HSE as required in order to perform its function, including in relation to winter planning.”