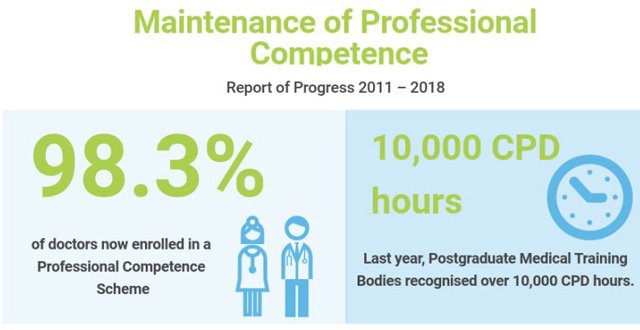 Monitoring of doctors’ compliance with maintenance of professional competence (MPC) needs to be strengthened, with a greater role indicated for postgraduate colleges and employers, according to a new report from the Medical Council.

It is “imperative” that mechanisms be established to facilitate doctors with their MPC and this should include protected training time, according to <em>Maintenance of Professional Competence: Report of Progress 2011-2018</em>.

“Where compliance remains an issue, postgraduate medical training bodies and employers should identify mechanisms to support these doctors,” states the report. “Guidelines need to be established with clear referral pathways to manage non-compliance. Ensuring proportionate regulatory action is of paramount importance. Referring non-compliant doctors to the regulator should be used as a means of last resort once all other avenues have been considered.”

One of the Council’s main functions is to ensure doctors are maintaining their professional competence. In May 2011, mandatory MPC came into effect, requiring doctors to undertake one practice improvement or clinical audit activity and accrue 50 credits or more in CPD activity annually.

However, in 2016, the medical regulator “established that the enrolment rates on a Scheme should be higher than what was being reported by the postgraduate medical training bodies”, notes the Council’s new report.

A “reasonable percentage of doctors” were not enrolled in a Scheme. However, it was also found that the data used to determine the size and characteristics of the non-enrolled pool was inconsistent and incomplete. Moreover, a robust mechanism was required through which enrolment could be monitored.

The Council introduced a number of incremental actions aimed at increasing Scheme enrolment. The MPC declaration in the retention of registration process was amended, such that doctors were required to have enrolled in a Scheme prior to completing the retention process. They were also required to declare and identify the Scheme in which they were enrolled.

An “extensive communication exercise” was undertaken by the postgraduate medical training bodies and the regulator to remind doctors of their legal requirement to be enrolled on a Scheme and informing them of the new deadline. “The Medical Council engaged with the HSE to request that evidence of Scheme enrolment forms part of the National Employment Record. Arrangements with postgraduate medical training bodies were revised to include regular data snapshots to monitor Scheme enrolment rates,” adds the report.

An analysis in May 2017 indicated that 9.9 per cent of the 12,978 doctors who should have been enrolled in a Scheme were not. The analysis also provided a summary of characteristics associated with non-enrolment; these findings were consistent with a review undertaken in 2016, which identified NCHDs working in public services as the most significant group of non-enrolled doctors. Other characteristics of doctors in the non-enrolled pool were registration in the General Division, aged under 35, non-Irish passport, and non-Irish basic medical qualification.

Findings from subsequent data snapshots obtained in September 2017, December 2017 and April 2018 showed that the size of the non-enrolled pool had reduced to 1.7 per cent, outlined the report. Non-enrolment remained highest in general practice, general (internal) medicine, psychiatry and anaesthesia.

In October 2017, the Council and Forum for Postgraduate Medical Training Bodies organised a symposium on the “challenges and opportunities” associated with supporting doctors with MPC.

Modern clinical practice was more complex and varied, which made setting CPD at the correct level complex, this symposium noted. Also emphasised was the need to use peer and practice review tools to reflect on doctors’ performance and incorporate findings to develop CPD initiatives; and that doctors should be encouraged to design a professional development plan.

Participants agreed that MPC had become “a tick-the-box compliance exercise, rather than an opportunity to engage in meaningful learning”. For this reason, communication to doctors on the benefits of MPC “throughout the continuum of their professional career is of paramount importance”.

The Council says the focus now will be on evolving the MPC model, drawing on international experiences.

According to the report, “engagement in relevant, quality CPD, including reflective practice, should become the norm. It is important that doctors are supported by the Schemes and employers who are both best placed to facilitate lifelong learning. Where compliance issues arise, these will be addressed through a comprehensive, proportionate, risk-based approach adopted by the postgraduate medical training bodies and employers.”

The report underlines that all key stakeholders must improve doctors’ knowledge about MPC requirements through proactive messaging.

Employers need to verify that employed doctors are maintaining professional competence, while postgraduate bodies should “implement practice review processes to reflect on and assess performance” and “expand use” of personal development plans.

The postgraduate bodies are rolling-out new initiatives to “shape the provision of CPD through the Schemes”, which will particularly emphasise: Offering relevant, quality CPD, either in-house and/or recognised externally through a quality assurance process; incentivising CPD that encourages reflective practice (ie, peer and practice reviews, personal development plans); introducing, promoting, tracking and reporting on engagement in CPD programmes which focus on prescribing, communication, consent, professionalism, record-keeping and doctors’ wellbeing; managing and monitoring CPD (including clinical/practice audit) compliance; and implementing a risk-based method to monitor compliance which expands on the verification approach.

As part of its mandate, the Council says it will provide “oversight for these developments”.

Ms Jantze Cotter, the Council’s Director of Professional Development and Research, told the <strong><em>Medical Independent</em></strong> (<strong><em>MI</em></strong>) that reducing the non-enrolled cohort to 1 per cent was “a big achievement”, arising from a collaborative effort.

However, data from postgraduate training bodies indicates that only around three-quarters of doctors are fully compliant with MPC requirements at present. This would be an area of focus for the Council over the next year, in conjunction with the training bodies, she said.

Currently, the training bodies “do a lot of work” in this realm, including engaging with doctors who are not recording the level of activity required. She said the postgraduate colleges conduct a verification of 3-to-5 per cent of their enrolled pool annually and provide feedback on this to the Council.

“We will definitely be working with them in the next year to set up a better risk management approach, so we can target those who are struggling more… ”

She said the Medical Council was interested in “‘right-touch’ regulation”, such that doctors would only be referred to Fitness to Practise inquiry for MPC issues after other avenues had failed.

In response to a query from <strong><em>MI</em></strong>, Ms Cotter also said she would discourage any rise in Scheme enrolment fees arising from increased involvement of training bodies around CPD issues.

“I would be totally discouraging any increase in enrolment fees to undertake this function… Where the fees were originally set, there was a degree of infrastructure that needed to be set up by each training body to start to operate a Scheme and those systems are all set up and functioning… I would like to see that the focus of the fees that they obtain go towards some of these areas we have identified that we want training bodies to address, particularly around the risk management approach, expanding the verification process, looking at provision of CPD activities that reflect the complaints that come in… communication, consent, record-keeping.

“So, we are saying, ‘this is where you need to shift your focus and the resources that you get should be used to do this’. It doesn’t mean they won’t come back saying, ‘if we were to do this, we’d need more funds’, but we’d be having quite detailed conversations if that did arise.”

Ms Cotter also confirmed that the Council was not currently looking at implementing a revalidation process, such as that operated by the General Medical Council (GMC) in the UK.

“We have been looking at what Australia and New Zealand are doing. I attended the international medical regulators conference last year and there was a lot of discussion around CPD and compliance and managing risk and looking at opportunities to put in an appraisal model. Everyone is probably struggling with what that means. The Medical Council alone could not do it… it would have to be something you’d develop jointly with the employers and training bodies.”

The Council will be launching a booklet in September on matters that are particularly applicable to doctors starting work in the Irish health service. This will be accompanied by an online resource that doctors can access to find out about courses and programmes on topics such as communication, consent, record-keeping, prescribing, end-of-life and cultural issues and wellness, etc.

The regulator is also developing an induction programme, known as Safe Start, for doctors new to medical practice in Ireland.

There were no complaints made to the Medical Council last year in respect of doctors maintaining professional competence, compared with 31 such complaints in 2016 and 14 in 2015, according to the Council’s Annual Report for 2017.

The HSE made five complaints and no complaints were submitted by any other Irish regulatory body. The Council made 21 complaints (15 where a doctor’s conduct came to its attention through the media or otherwise; and six where it had been notified by a body in another state).

The biggest single category of complaint was communication (126), followed by diagnosis (98).

Meanwhile, some 42 Fitness to Practise inquiries were completed in 2017. One doctor was found guilty of professional misconduct, compared with 17 in 2016, while four were found guilty of poor professional performance, compared with 11 in 2016. In some 16 cases, the doctors were not guilty/fit to engage in practise of medicine/no case, while 18 doctors gave undertakings pursuant to section 67 of the Medical Practitioners Act 2007.

Three doctors had their registration cancelled, compared with six in 2016.