The Brexit build up 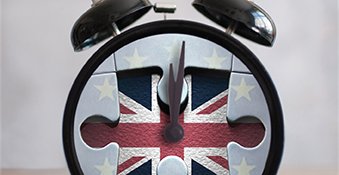 Clock with missing piece from a jigsaw piece british flag

With Brexit due to take place at the end of this month, recent minutes from the HSE’s audit and risk committee show how much preparation the Executive is involved in. David Lynch reports

Some €12 million had been spent by last September on stockpiling of medical devices and medicine in preparation for Brexit. That is according to minutes of a teleconference meeting of the HSE’s audit and risk committee on 13 September 2019, seen by the Medical Independent (MI) following a Freedom of Information request.

The meeting was held to discuss ‘Brexit preparedness’ and took place in the context of growing fears of a ‘no deal’ Brexit with the 31 October deadline looming. That date has since passed without Brexit happening, with a new deadline now set for the end of January.

The committee members at the September meeting noted that significant work had already been carried out in areas such as emergency services, public health as well as human resources.

Members raised concerns that in the wake of Brexit “some issues with recruitment were anticipated”.  However, according to the discussion, recent data had shown that Ireland “has become a more attractive location with the number of nurses coming to Ireland rising over the last number of months”.

The large part of the meeting focused on the avoidance of disruption of supply of medical devices and medicines following Brexit. The HSE had engagement with the Health Products Regulatory Authority (HPRA), suppliers, and clinical leads on the issue, the committee was told.

“Where solutions have proved difficult the issue has been escalated to the DOH [Department of Health],”  the minutes noted.

“Additionally, items which are at risk have been stockpiled, typically with two months’ supply and with the supplier agreeing to hold multiple weeks of stock, usually between eight-to-10-week’s worth.”

The committee was told that millions had already been spent on this work.

“Some discussion on the cumulative cost of Brexit took place and the committee noted that €12 million had been spent so far, which includes the warehousing and stockpiling of goods,” according to the minutes.

“Discussion with the EU Commission in relation to the impact of Brexit are still ongoing.

“The committee noted that a joint working group has been working through groups of medicines to identify vulnerable product lines. Specific risk areas have been identified including medicine with short product life and alternative solutions were also sourced from the medicine shortages framework.

“Further discussions took place [around] the logistics of supply chains and effects disruption may have on clinical trials, the effect on blood products and also how individual patients will be affected.

“In this regard the committee advised that the risk ought to be re-defined to focus on the extent of potential detriment to patients and that the number of patients and service-users affected should be sized as part of the risk.”

There were other challenges caused by Brexit raised at the meeting, including “disruption to the treatment abroad scheme and the cross border directive”.

“The committee considered the effects Brexit would have on cases involving wards of the court and cases which would have previously been dealt with under the EHI [European Health Insurance] card scheme.”

There will be some legal impact caused by the UK’s planned exit from the EU and the committee noted “the regulatory issues that will arise as the UK will become a ‘third country’ from 31 October… It was agreed that a more in depth look at the provision of healthcare to temporary visitors to the UK will be required.”

However, despite the myriad of challenges and disruption potentially caused to the Irish health service by Brexit, the committee declared itself content that “huge progress has been made and that progress is continuing to mitigate the residual risks that remain and the committee will continue to seek updates on this. It was agreed that future discussion might take a more patient-centric view and work through more ‘what if’ scenarios.”

The Department of Health has previously told MI that it is continuing its preparations for the possible impact of Brexit, which remains on the internal risk registers of a number of health bodies.

“In July the Government published the Brexit contingency action plan update, reflecting the extensive work which has taken place at EU level and on a whole-of-Government basis, to prepare for a no deal Brexit,” a Department spokesperson told this newspaper earlier last year.

“The Department in conjunction with the HSE, the HPRA and the Food Safety Authority of Ireland (FSAI) has been engaged in extensive Brexit planning and action to ensure that the healthsector is prepared, to the greatest extent possible, for any adverse impacts as a result of Brexit.”