SURG-Africa and improving surgical services on the continent 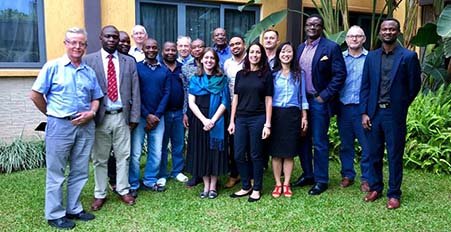 SURG-Africa, international implementation research consortium, is helping to increase access to surgical care for neglected populations in rural Africa. By introducing simple solutions allowing surgical specialists to supervise and interact with district-level providers, the project is changing the landscape of surgical care in the region.

Conditions amenable to surgery account for an estimated 11-to-15 per cent of the global disease burden, with 1.4 million preventable deaths occurring annually. Yet, access to surgical care around the world continues to be inequitable, particularly in sub-Saharan African (SSA) countries, where the performance of health systems is undermined by chronic resource scarcity. It is estimated that up to 95 per cent of the population in SSA has limited access to safe, affordable surgical and anaesthetic care, because general surgical services are concentrated around urban centres. If comprehensive universal health coverage is to be achieved, the surgical needs of rural dwellers must be met.

A key challenge, however, is the shortage of qualified staff — specialist surgeons, anaesthesiologists and nurses — aggravated by labour migration, with as few as one surgeon per 2.5 million people in some sub-Saharan rural settings. This human resource gap is often filled by health professionals with non-specialist training, such as medical officers, non-physician clinicians (often clinical officers), and general nurses.

SURG-Africa is a European Union Horizon 2020-funded, four-year research project which aims to improve surgical services in district facilities in Malawi, Zambia and Tanzania (find out more at www.surgafrica.eu). It is co-ordinated by a team of health systems researchers from the RCSI in collaboration with two European partners and three African institutions. The intervention model is comprised of two elements. The first is a programme of surgical supervision for district-level hospitals — teams of in-country surgical specialists from central hospitals comprising a surgeon, anaesthesiologist, obstetrician and theatre nurse.

In Malawi, 80 per cent of the population lives in small villages and towns where district hospitals are often the primary source of surgical care for rural communities. District hospitals are almost entirely run by non-physician clinicians, called ‘clinical officers’, while the few medical doctors working in these facilities are predominantly found in administrative roles. Prior to our first Clinical Officer Surgical Training (COST-Africa) project, there were no communication systems between district and central hospitals that would allow practitioners from remote areas to access specialist opinion.

In early 2018, in the southern region of the country, SURG-Africa launched the managed clinical network via WhatsApp. The decision made sense, as the app is almost free of charge and was already used widely throughout the country.

The WhatsApp group connects district-level practitioners with specialists who are only available in the main cities. The current membership includes over 100 district clinicians and 15 surgical specialists based at Queen Elizabeth and Zomba Central hospitals. A designated administrator ensures professionalism and that members adhere to the approved ethics standards for the group. “People love it,” said Prof Eric Borgstein, Paediatric Surgeon at Queen Elizabeth Central Hospital (QECH), extolling the introduction of the network. The ability to share text messages, as well as photos and audio clips in real time has enhanced the ability to make timely clinical decisions and streamlined the referral process.

The group has created a closed referral feedback loop system between central and district hospitals. Traditional paper-based referral forms, which went home with patients leaving central hospitals, meant that feedback on patient management at central level was almost never returned to district clinicians. Rarely were clinicians able to give feedback, but this [managed clinical network] is instantaneous. All the contacts are immediately accessible, which Prof Borgstein said facilitates the process tremendously.

The group also allows district clinicians to track their patients after they have been referred. “Previously, we would just write a referral letter to the Queen’s with the patient, but if you talk with that consultant on the WhatsApp, you are doubly sure that this case will be seen”, according to Mr Martin Malunga, Clinical Officer from Mulanje District Hospital. Now it is compulsory for district clinicians to post details of each case in text format, supported by images if necessary, and to wait for specialist advice, with the exception of urgent emergency cases, before referring a patient onwards. Feedback is always passed back to the district clinicians after the case has been treated centrally. “We have become like family,” according to Dr Patrick Noah, Head of Surgery, College of Medicine. He noted that the gap between district and central hospitals that has always been there disappeared with the arrival of the group. “[District clinicians] are not afraid to ask for medical or surgical opinion,” Dr Noah said.

The nature of the group means that all members benefit from any advice or feedback, irrespective of whether they were the clinician to introduce the case. This has resulted in the creation of a broader learning environment for members. “Medicine is dynamic; each and every day you need to learn,” according to Mr Malunga. Clinicians are engaging with the group daily and encourage it as a form of training that keeps up with the rapidly-changing surgical field.

Patient safety and quality of care have vastly improved, benefiting from the clinicians’ instant access to specialist opinion, which has led to improved knowledge and skills on how to conduct surgery at the district level. Dr Tiyamike Kapalamula, Paediatric Surgeon from QECH in Blantyre, noted that since the launch of the group, patients have arrived in much better condition, enhancing their ability to intervene and minimising the time from patient arrival to the patient’s treatment. “Better care of patients nationwide — that’s what we all want, really,” she said.

Early findings suggest that the intervention is very beneficial for hospitals in the trial, according to Dr Jakub Gajewski, RCSI Institute of Global Surgery (IGS) Research Programme Director and SURG-Africa International Co-ordinator working at the RCSI IGS.

Encouraging feedback about the visits and the newly-established communication systems has been received. Both surgical supervisors and clinicians have already reported positive changes, according to Prof Ruairi Brugha, the Irish Principal Investigator on the project.

The research agenda, which is built into the project, aims to identify and measure the range of benefits resulting from the project. Analysis of preliminary data showed that over a third of cases discussed on the group within the first four months were managed locally following advice from the specialists, avoiding unnecessary referral.

This meant savings for both patients and their relatives who did not need to travel to central hospitals, as well as savings for the country’s healthcare system. Fifteen per cent of posted cases received recommendation for a later referral and 52 per cent resulted in an immediate referral. Response rates were excellent, with 78 per cent of requests for advice receiving a response within one hour, and in 68 per cent of cases, agreement on clinical management and referral was reached within an hour.

The RCSI has a long history of involvement in global surgery and has implemented a number of successful programmes in Africa. Initiatives such as the Clinical Officer Surgical Training project, which developed sustainable surgical training models for non-physician clinicians in Malawi and Zambia and the RCSI-COSECSA (College of Surgeons of Eastern, Central and Southern Africa) collaboration, which trains surgical specialists in 14 countries in the sub-Saharan region, are the flagship projects of the College.

The IGS will build on these successes and expand the work of RCSI, with a continued focus on collaboration with local stakeholders to strengthen health systems in low- and middle-income countries, in a needs-driven manner.