Doctors leading on climate action in 2022 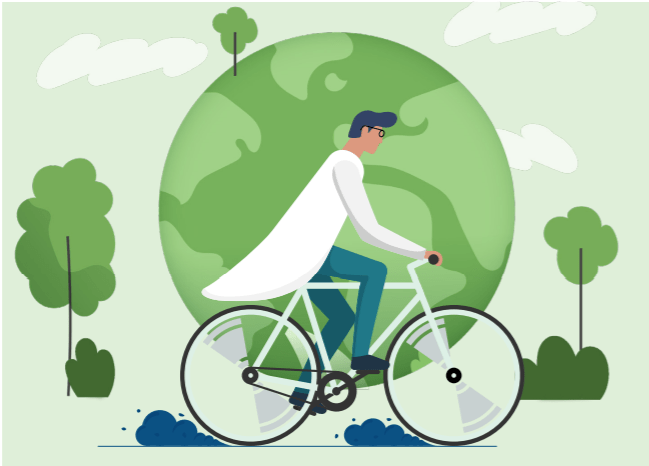 Recently, there has been a growing level of activism among doctors on issues of climate justice, and the trend looks set to continue this year. David Lynch reports

Doctors are emerging as a significant component of the global response to the climate crisis. Activism within medical circles has grown internationally and Ireland is no different. Via its Twitter account (@IrishDocsEnv), the Irish Doctors for the Environment (IDE) recently stated that “it’s not unlikely that we [doctors] need to lead on climate action, given the enormously negative impacts climate breakdown is having and will have on human health. Climate action is the most effective public health action we can take!”

Last month in the Medial Independent (MI), Dr Neasa Conneally wrote that “there is now a greater movement in medicine towards green prescribing and the concept of ‘planetary health’”. “It seems logical that the health of the planet and the health of its people are inextricably linked. Living in a more inhospitable world is, of course, going be detrimental to our health.”

In Ireland a number of medical organisations, including the IDE, are leading on these issues. For its part, the ICGP has established a sustainability working group. For some, the frontlines of general practice may seem very far away from the global issues of climate change. So why is it important that GPs engage with these topics? “GPs play a significant role in planetary health, and GPs and their practices can act as role models in a healthier future, for patients and the planet,” Dr Sean Owens of the ICGP’s sustainability working group told MI.

“The sustainability working group is a group of GPs formed to raise awareness amongst GPs and GP trainees, and GP practices, of the environmental impact of their activities and actions.”

Dr Owens said that the healthcare system “needs to be greener and more economical” with an emphasis on preventative models and community-based care.

“This is where GPs and their practices can act as role models in what a healthier future for patients and the planet might look like.” In terms of other actions, the ICGP has endorsed the Dublin Cycling Campaign, which is also supported by other medical organisations such as the RCSI and IDE. The campaign sees its main task as hastening “improved conditions for cyclists and greater recognition of the benefits of cycling”

“Improved air quality and improved cardiorespiratory fitness is a big win for better planetary health and the health of our patients,” said Dr Owens. “We believe the Government needs to work harder to promote active travel, including cycling in cities.” Dr Owens also said that “biodiversity is of huge importance” with an emphasis on the protection of pollinators and flora and fauna.

“We are utterly dependent on an abundance of nature for our human health. The Government must do more to help restore our green spaces, both urban and rural.” He also noted that it is “essential that we make the link between our roles in the community, our actions within the patient consultation and the ingenuity within healthcare professionals to find real climate and health solutions”.

Following on from the recent COP26 conference in Scotland, Dr Owens said that “continued dialogue” to ensure a just climate transition “with evidence at the heart of the dialogue is key”. “Healthcare professionals are continually rated as highly trusted sources of information, which is again why we have been asked to lead. Ireland’s excellent Covid vaccination uptake is a marker of hope that we have, despite our many historical issues, great social cohesion. Our response to Covid in general has shown that we can meet these challenges once we understand the gravity of the situation.”

On a wider level, is there a growing awareness of the link between the environment, sustainability and population health? Dr Colm Byrne, Consultant Geriatrician and General Physician in the Mater Misericoridiae University Hospital, Dublin, and member of IDE, believes “the population are getting there”.

“However, I don’t think people realise the fundamental changes that will have to happen in how we live, and get around, that have to occur – such as cycling and walking more, eating less meat and not building huge one-off houses in the middle of nowhere,” he told MI.

“Policy makers I do think get it, especially when you sit down with them and talk them through it. But politicians’ primary desire is to be re-elected and that is why the shift needs to happen in the public.” Looking back at the legacy of COP26 last year, Dr Byrne described it as “an interesting conference”.

“I think the conversation has shifted to getting below 1.5°C, or certainly 2°C, by 2050 – even if the promises haven’t aligned yet. It has set up COP27 in Egypt to be a potentially groundbreaking conference as all the countries were told to go away and re-evaluate their targets to achieve 1.5°C.” Established in late 2019, the Irish Climate and Health Alliance membership includes the RCSI, RCPI, IMO, Irish Global Health Network, Irish Heart Foundation, Irish Cancer Society, and others.

The Alliance told this newspaper that in 2022 the “two areas where the Irish Government urgently needs to become more ambitious in terms of climate change and health is tackling air pollution and rapidly expanding active travel infrastructure to achieve a radical shift away from private vehicle dependency”.

A spokesperson for the Alliance said that while the incoming solid fuel regulations, set to be in place for winter 2022, will effectively ban the burning of smoky coal and wet wood, it is calling for the Government “to go much further and pass a Clean Air Act that includes the adoption of the updated WHO air quality guidelines”. “Air pollution damages nearly every organ in the body and it is clear that there is simply no safe level of exposure to poor air quality.”

“Secondly, 2022 needs to be the year we see the Government committing to and implementing an expansive roll-out of active travel infrastructure so we can achieve the required modal shift from private motor vehicles to walking and cycling.” Dr Byrne told MI he had not seen evidence of any recent positive steps by the HSE and other employers to promote active travel and transport like cycling. “Initial steps would be to provide a fleet of e-bikes or regular bikes for home visits and going between different sites,” he said.

“Also to provide secure onsite parking for bikes and changing facilities.” Local authorities “have been a mixed
bag” on the provision of active travel and transport, he said.

“Some like DLRCC [Dún Laoghaire– Rathdown County Council] have been great with the coastal mobility route, though there are a cohort of councillors who are actively blocking safer cycling, such as in Deansgrange with a safe schools route and the Strand Road decision.”

The Medical Independent (MI) reported in November that the Department of Health had formed its climate change oversight group. The Department said the group held its first meeting on 27 September. “It is expected that the group will meet in plenary two-to-three times a year, while providing a forum for regular bilateral engagement and the sharing of climate-related information and developments,” a Department spokesperson told MI in December.

The spokesperson added that “over time, additional business areas, which interact with the climate agenda, may
be identified and the membership of the oversight group may be added to”.