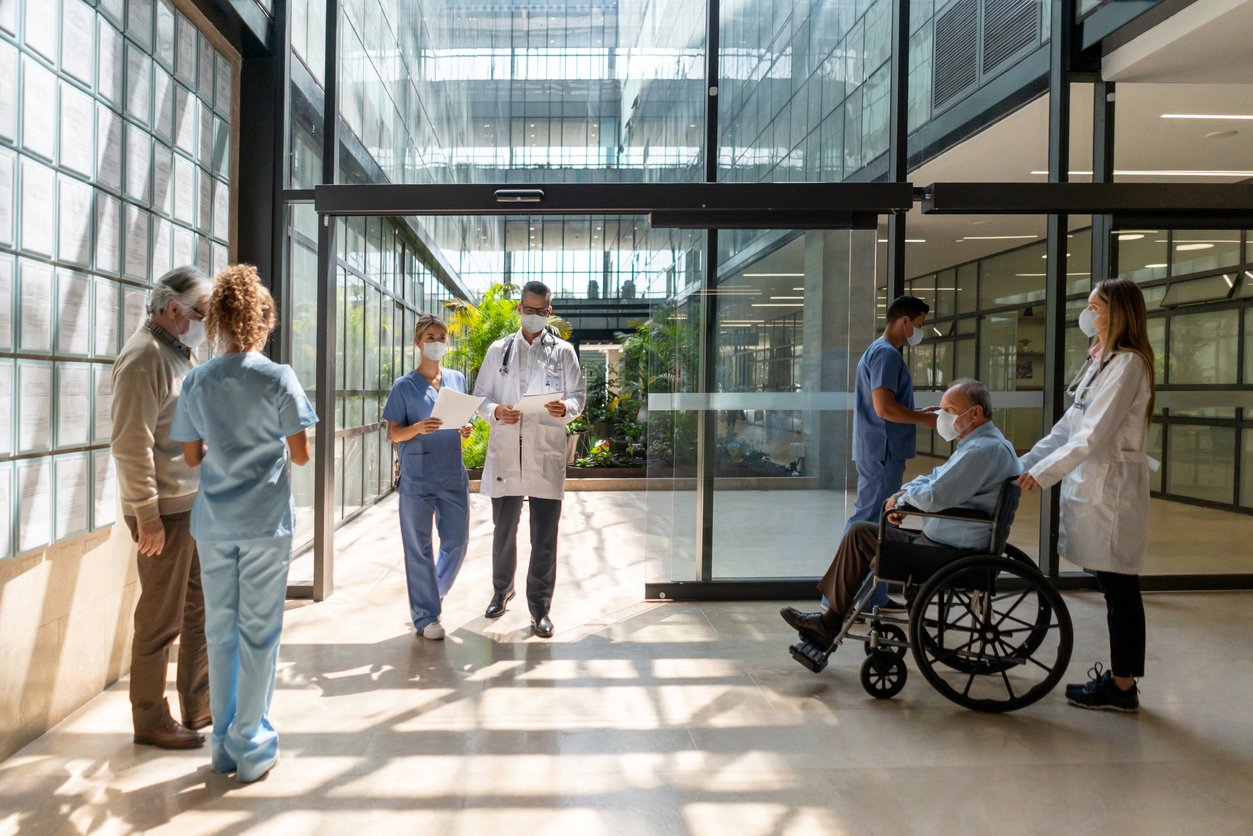 People walking in and out of the hospital - Healthcare concepts

Correspondence relating to Croom Orthopaedic Hospital offers an insight into the views of the HSE and Department
of Health on the monitoring of private activity. Paul Mulholland reports

Last year, as part of its function in monitoring elective care performance, the Department of Health’s scheduled and unscheduled care performance unit commenced a review of activity levels in the acute hospital system. On 31 July 2020, Director of the unit Mr David Smith wrote to HSE National Director of Acute Operations Mr Liam Woods in relation to the University of Limerick Hospitals Group (ULHG). The letter, which was obtained by the Medical Independent (MI) through Freedom of Information (FoI), put forward questions in relation to the operation of Croom Orthopaedic Hospital, Co Limerick.

According to figures available to the Department, 32 per cent of activity in the hospital in 2019 was private (26 per cent of day cases and 44 per cent of inpatient cases). An examination of the expenditure figures for 2019 indicated that the gross expenditure for Croom Hospital was €16.4 million. However, the contribution from private fees was only €2.4 million.

“As you are aware the University of Limerick Hospital is one of the hospitals most consistently faced with challenges relating to its emergency department and capacity generally,” wrote Mr Smith. “While additional capacity is being provided through the provision of an additional 60 beds for University of Limerick Hospital due to come on stream in the final quarter of this year, the Department is aware that the HSE has indicated concerns regarding the impact of operating within the parameters of NPHET’s [national public health emergency team] recommendations.

“While acknowledging the contractual obligations the HSE has with hospital consultants regarding private work and that charges for private care are fixed there appears to be a very high level of private activity given the range of issues faced by the Group as a whole. “The question therefore arises as to how best to use the resources of the University of Limerick Hospitals Group effectively and efficiently and whether the current use of Croom Hospital’s resources for a very high level of private activity is the most effective use of the Group’s resources from an operational and value for money perspective.”

Mr Smith said he would be “grateful” if Mr Woods could raise the issue with ULHG management to examine the pattern of activity in Croom Hospital. He also stated he would appreciate any views Mr Woods had as to whether there was an opportunity for ULHG management “to re-evaluate the use of its resources to help to address the longstanding difficulties experienced within the Group”.

HSE response In his response, dated 9 September 2020, Mr Woods stated he wished to “ensure” that Mr Smith understood the role and function of Croom Hospital. He pointed out it was an elective hospital that provided orthopaedic, rheumatology, and pain management; and it was not an emergency/unscheduled care unit. “The site is governed by the clinicians and covered overnight by one SHO, therefore, criteria for use is very specific and carefully managed to ensure safe care at all times,” according to Mr Woods. Even when emergency demand rose in the mid-west, transfers were managed “very well” between the model 2 sites “of which Croom Orthopaedic Hospital does not meet the criteria”, he outlined.

Mr Woods added that the hospital provided beds for post-orthopaedic and trauma care patients and implemented an ambulatory trauma surgery at the site in the previous year. Mr Woods also noted consultant numbers for orthopaedics were at a low base in comparison to other regions. The hospital had five consultant surgeons covering a population of approximately 380,000, which he believed was “not just the lowest number per head of population in Ireland but among the lowest, if not the lowest, in Western Europe”.

“Meeting the demand from the significant number of public patient referrals requires the appointment of additional orthopaedic surgeons. The sheer volume of referrals is the most significant factor contributing to waiting lists in orthopaedics and not consultants favouring private over public patients. Consultants are covering both emergency trauma and elective surgery.” Mr Woods also explained that ULHG was managing “endemic” carbapenemase-producing Enterobacterales in the mid-west. “[ULHG] protects elective orthopaedic surgery at site to prevent the high-risk impact of joint infections, which can lead to serious adverse events,” he wrote.
At the beginning of the Covid-19 crisis in March/April 2020, all services were stood down and Croom Hospital provided beds for medical patients and “prevented trolley waits at University Hospital Limerick”. This was achieved by staff redeployment during lockdown.“With reference to contractual obligations, consultant contracts and schedules are clearly defined by [ULHG],” according to Mr Woods.

“The various consultant contracts contain different elements relating to total activity levels and the public/private split. However, it should be noted that these contracts include a number of Buckley Category 1 contracts, which are not definitive on meeting set public/private ratios, but rather relate to the proportion of activity based on bed designation. There are also some historical elements in some contracts which affect this public/private split. The 70:30 ratio is, in the main, the contractual position of orthopaedic consultants.”

Mr Woods stated private patient income in the hospital is raised on the basis of patients opting to be private and charges are raised in accordance with the statutory charges. The total private income is a product of the number of private patients and the recorded length of stay, rather than as a percentage contribution to gross expenditure.“Monitoring of the income function is continually carried out to ensure that income is maximised. An analysis of the overall Group budget at June 2020 shows that private income of 49.6 [million euro] is 11.3 per cent of total expenditure,” he wrote. “The HIPE data is actively monitored by [ULHG] and this will continue to be the case. [ULHG] continuously monitors both overall activity of consultants as well as the public/private ratio as per their contracts. Data is also used by [ULHG] from their PAS [patient administration system], theatre logs and multidisciplinary team meetings and these inform the Group’s discussions.”

When questioned by MI on the Department’s response to the letter, a spokesperson said: “The Department does not comment on correspondence between its officials and officials in the HSE.” When asked for a general comment on the monitoring of private activity, the spokesperson added: “Compliance with the consultant contract is a matter for the HSE. The HSE has put in place a framework for monitoring and managing private practice activity levels in all acute hospitals. Under the framework where compliance is an issue corrective action is required.”

A spokesperson for ULHG told MI the public-private mix was monitored on a monthly basis in Croom Hospital and throughout the Group. “In respect of the management of waiting lists for procedures at Croom Orthopaedic Hospital, it should be noted, as Mr Woods emphasises in his letter to Mr Smith, that the sheer volume of referrals is the most significant contributory factor to orthopaedic waiting lists,” according to the spokesperson. “Another significant factor to be considered is that there is no large sub-acute private hospital serving the mid-west region. Therefore, the population of the mid-west must access services for elective orthopaedic care at Croom Orthopaedic Hospital, which has a high-calibre reputation for safe elective care.”

With regard to measures being taken to manage waiting lists at the Croom Hospital, the spokesperson said work was continuing on a number of fronts, including: The creation of capacity; recruitment of additional surgeons; referral of urgent surgical and medical cases to the National Treatment Purchase Fund; and the private hospital service agreement.

In MI’s 25 May issue, we reported on the 2019 annual report of the private practice of public hospital consultants and their adherence to private practice limits set in the consultant contract. A review of non-compliance with public/private mix highlighted a number of factors which were largely outside of the control of the hospitals or consultants and could contribute to overall levels of public/private activity. Foremost among these was emergency admissions. Other factors included: The specialist services provided by the hospital; whether it was a larger hospital providing emergency and complex care or a smaller hospital with less complex emergency, day case and elective care; whether comparable services were available in a nearby private hospital; where there was no private hospital located in the same region as the public hospital; and the various consultant contract types within the hospital.