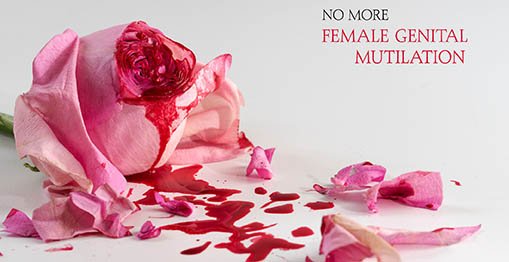 cut rose blossom, blood and petals on a bright gray background with text No More Female Genital Mutilation, concept for the international day of zero tolerance for FGM on 6 february

Sandra Ryan reports on a recent conference, which highlighted the need to raise awareness of female genital mutilation

AkiDwA, Ireland’s network for migrant women, held a conference in Dublin recently to raise awareness of female genital mutilation (FGM) as a serious issue for girls living in Ireland and to discuss the most effective strategies for engaging with communities to end the practice. It is estimated that around 500,000 girls and women in the EU are living with the lifelong consequences of FGM, and that every year a further 180,000 children are put at risk from this harmful traditional practice.

There are four types of FGM, as classified by the World Health Organisation:

Type I involves partial or total removal of the clitoris.

Type II includes that, along with partial or total removal of the labia minora.

Type III, the most drastic form, involves cutting and positioning the labia minora and/or labia majora to create a stitched seal over the vagina orifice, with or without cutting of the clitoris.

Type IV covers all other harmful, non-medical procedures to the genitalia, such as piercing, incising, and cauterisation.

UNICEF (the United Nations Children’s Fund) estimates that FGM is still practised in roughly 30 countries, with prevalence rates among females aged 15-to-49 as high as 98 per cent in Somalia, 97 per cent in Guinea, and 90 per cent in Sierra Leone. In such communities, the belief that girls are not marriageable if they have not undergone FGM drives parents to perpetuate the practice, to prevent their daughters becoming social outcasts.

The AkiDwA conference, entitled ‘Community Dialogue: Debunking the Myths around FGM’, heard from Dr Caroline Munyi, Migrant Women’s Health Coordinator at AkiDwA, who explained that FGM was banned in Ireland seven years ago, when the Criminal Justice (FGM) Act 2012 was passed after a decade of campaigning by AkiDwA.

“However, the number of women and girls in Ireland at risk of FGM continues to increase,” said Dr Munyi. “AkiDwA’s latest estimates suggest that 5,795 women and girls living here have to deal with the consequences of FGM.”

AkiDwA has been working with Irish authorities at local and national level to end FGM for almost two decades. Prominent human rights activist Ms Ifrah Ahmed has also raised significant awareness around the issue. AkiDwA has produced some of the materials currently included in Gardaí diversity training.

“Through these and other interactions, AkiDwA has realised that there are still issues with how professionals in Ireland communicate about FGM with people from migrant communities,” according to Dr Munyi.

Misunderstandings in communications about FGM pose a very serious risk to women and girls in communities at risk of FGM, as they can affect their ability to integrate into wider Irish society and they can even prevent them from seeking help when they really need it.

“Miscommunication when talking about FGM can lead to misunderstandings that can intensify feelings of alienation and mistrust and combined with the many unhelpful myths and the secrecy that already surrounds FGM. This can put women and girls at even greater risk,” Dr Munyi told the conference.

Senator Ivana Bacik also spoke at the conference, and called on the Government to commit the resources needed to develop a national action plan to eradicate the harmful traditional practice.

“A national action plan is needed to guide State agencies like Tusla, the HSE, and Gardaí on how to build partnerships with communities to eradicate FGM,” said Senator Bacik, who was responsible for bringing the Private Members Bill that outlawed FGM in Ireland seven years ago.

She told the conference that she had been inspired to produce the Bill by AkiDwA’s decade of campaigning.

Also at the event, AkiDwA’s Ms Nenette Bouithy presented research findings on the psychological impact of FGM on teenagers. The research assessed 21 studies of how FGM had affected women’s mental health. She found evidence that FGM can be a risk factor for developing post-traumatic stress disorders and other mental health disorders. However, she also found evidence that women who sought help from holistic care programmes reported some benefits from these programmes, even when they chose not to have clitoral surgical reconstruction.

Dr Edith Iheama from the Mojatu Foundation, a charity based in Nottingham, UK, spoke next about how her organisation has been working with local and national authorities in England to make Nottingham Europe’s first City of Zero Tolerance for FGM. Dr Iheama explained how Mojatu works with teachers, youth groups, parents, and agencies to debunk the myths that still persist around FGM.

Representing the Department of Justice and Equality at the conference was Secretary General Mr Aidan O’Driscoll, who stressed that the Department’s recently completed re-organisation had done much to strengthen its commitment to equality for all. He thanked AkiDwA for decades of useful collaboration and confirmed the need for funding to be allocated to develop a national action plan to end FGM in Ireland.

AkiDwA has a network of volunteer community health ambassadors throughout Ireland raising awareness on FGM in their local communities. For more information visit akidwa.ie/female-genital-mutilation/