Behind the lines of the ethical guide 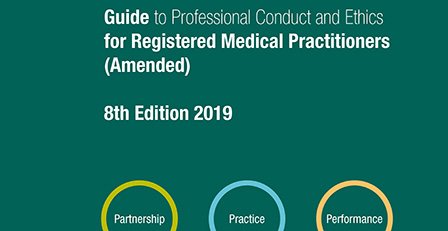 The enactment of new legislation on termination of pregnancy required the Medical Council to update its ethical guide. Catherine Reilly examines Council documents that describe this complex process

Medical Council ethics working group considered deleting the paragraph on termination of pregnancy from the ethical guide for doctors, according to a consultation synopsis document obtained by the Medical Independent under Freedom of Information law.

This was one of the most interesting proposals from the ethics group, which the Council formed to review the ethical guide, in light of the Health (Regulation of Termination of Pregnancy) Act 2018.

Following an initial consultation, according to the document, “it was observed that doctors wished for clear guidance from the Medical Council regarding termination of pregnancy (ToP) and conscientious objection (CO)”.

“Many participants used the consultation as an opportunity to voice their conscientious objection to ToP in practice. The importance of the limitations of CO also became apparent. The guide was reviewed with this feedback in mind and amendments were developed.”

In February 2019, the ethics group sought input from doctors and “key stakeholder groups” regarding its proposed amendments.

Participants were also afforded the opportunity to provide freetext responses to propose alternative wording if they so wished.

There were 1,600 responses to the consultation questionnaire distributed, of whom 94.75 per cent participated (1,516). A majority of participants (65.15 per cent) self-reported working as a registered medical practitioner.

In relation to paragraph 48 (‘termination of pregnancy’), the document outlined that the ethics group had “considered deleting paragraph 48 in its entirety and noted senior counsel’s legal advice did not preclude the Medical Council from doing so”.

However, the document added that the group “also noted Council’s views on this matter, as expressed at both meetings in December”.

The ethics group accepted that “it is probably too soon for the Medical Council to cease providing specific advice on ToP, however, the guidance should be kept very simple and, again, make it clear that there are legal provisions regarding ToP and doctors should provide such services within the provisions of the legislation”.

As it stood, the existing paragraph outlined that “you have a duty to provide care, support and follow-up for women who have had a termination of pregnancy”. The ethics group proposed adding that termination is legally permissible within the provisions of the new Act, with a footnote link to the legislation. These edits were included in the revised guide, which was published on 30 August last.

On paragraph 39 (‘refusal to treat’), the ethics group advised adding that “refusal to treat is different to exercising a right to conscientiously object. For such circumstances, see paragraph 49 (‘conscientious objection’).” However, this addition was not included in the revised edition.

An edit in a similar vein was inserted into paragraph 42 on prescribing. The ethics group proposed adding that “treatment, medication or therapy which a doctor does not believe is in the ‘patient’s best interests’ does not include those to which a doctor wishes to exercise their own right to conscientious objection”, with a reference to the paragraph on conscientious objection. A reworded version of this proposal was included.

“In light of new ToP legislation, where a doctor views the foetus as a patient, this paragraph may be misinterpreted as being incompatible with ToP,” according to the ethics group’s rationale.

However, this sentence was not changed. Of note, the proposed edit drew a strong response from Amnesty International during the consultation process.

“To equate abortion with ‘killing’ is stigmatising and dangerous. Additionally, section 46.9 is in the context of ‘end-of-life’ care. Abortion is not end-of-life care; to characterise it as such suggests foetal personhood, a concept which is not supported by the international human rights framework. This amendment should be removed.”

The main additions proposed for the section on conscientious objection were that “referral and/or facilitating transfer should be safe, effective, timely and not excessively burdensome to the patient”; and that “you should not provide false or misleading information, or wilfully obstruct a patient’s access to treatment based on your conscientious objection”.  These edits were included, although the first was slightly reworded.

According to the ethics group, it received advice from Dr Joan McCarthy, Lecturer in Ethics, University College Cork, that there were five widely-accepted conditions that must be addressed for a healthcare professional to be allowed exercise their right to conscientious objection.

Amnesty’s submission also stated that it was necessary to clarify that “conscience-based refusal to provide healthcare cannot be exercised where referral is not possible”. Among other recommendations, Amnesty said the group should consider replacing the phrase ‘conscientious objection’ with “conscience-based refusal to provide a lawful health service to a patient”. However, these suggestions were not taken on board.

Interestingly, the most divisive amendment proposal related to paragraph 1.3, in the section on how to use the guide. The ethics group proposed changing “your responsibility is to help the sick and injured and to give care and treatment that meets your patients’ needs… ” to “your responsibility is to help people seeking to access healthcare services. You must give information, advice or treatment that meets their needs… ”

In addition to an existing line about not letting professional actions be influenced by any personal interest, the group advised adding: “You should also be aware of your obligations should you have a conscientious objection to a treatment”.

The reference to ‘healthcare’ elicited much debate among respondents, indicated the document.

“I don’t believe abortion is healthcare,” one respondent stated.

Another respondent noted that not all patients actively seek access to healthcare: “The revision doesn’t make sense to me. If a patient is unconscious, the doctor could not classify that person as ‘seeking’ anything. But would they not still have a duty to care and provide treatment that would be necessary ?”

The revised guide stated that “your responsibility is to help the sick and injured, and those seeking medical care, and to give care and treatment that meets your patients’ needs”.  A reference was also inserted on a doctor’s obligations should they have a conscientious objection to providing a treatment.

According to the document, the benefit of the consultation being publicly accessible meant that a broad range of stakeholders could provide feedback.  But this also presented “a significant challenge” to this piece of work.

“In the context of the divisive nature, many participants from a range of interest groups used the consultation as an opportunity to voice their conscientious objection to ToP in practice, with an emphasis on conscientious objection and the breadth or limitations of such. This included many responses stating opposition to provision of ToP services rather than providing feedback regarding specific amendments to the guide,” stated the document.

“The implication of changes is far-reaching and represents a significant shift in practice for doctors, who wish for clear guidance to be issued that is unambiguous. Some respondents noted ambiguity that still exists and further clarity to support safe practice for patients would be beneficial. Vignettes to illustrate the difference between conscientious objection and refusal to treat may support doctors going forward to support publication of the amended guide.”