A trailblazer for female doctors 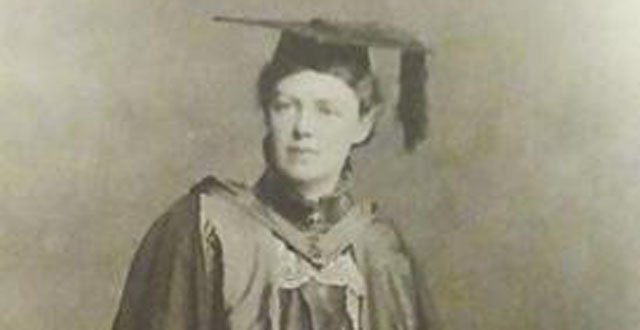 Emily Winifred Dickson made a momentous decision while nursing her sick mother—she decided she wanted to become a doctor, a choice that ultimately propelled her into history as the first female Fellow of the Royal College of Surgeons in Ireland (RCSI).

But such a triumph did not come her way easily. Indeed, the odds were stacked against her all along the way. For a start, she made her decision at a time when few women dared to have such audacious ambitions.

The Victorian era into which Dr Dickson was born in 1866 was generally bleak for women. Most were illiterate, health was poor, and infectious diseases and multiple pregnancies were common.

Many of those who were better off, however, were not necessarily happy to be confined within the limited horizons of their homes. Yet that is where their menfolk expected them to stay. So when Dr Dickson challenged these well-entrenched mores in her early 20s she was lucky to have a formidable ally in her father who nurtured and encouraged his daughter’s nascent ambitions.

Others, however, were not as understanding or as encouraging and protested vehemently against any attempt to level the barriers so firmly erected against women. But they underestimated Dr Dickson at their peril.

Here was a woman fired by conviction and courage who was determined to live to her full potential, despite the constrictions of her era, and who ended up crafting new horizons for women, especially those who dared to dream of a career in medicine.

Accepting papers donated to the RCSI by Dr Dickson’s family in 2012, Prof Eilish McGovern, the first female president of the College, said Dr Dickson “was one of a few pioneering women doctors working in Ireland who greatly helped to remove the prejudice against women working in medicine and made it easier for women who have since followed her in her footsteps”.

Dr Dickson was born in Dungannon, Co Tyrone, on 13 July 1866, into a country where women were not allowed to sit examinations or obtain degrees. The year before her birth, the English physician Elizabeth Garrett Anderson, who had a postgraduate degree from Paris, registered with the General Medical Council (GMC), but she could not practise.

Women were prevented from being registered to practise until 1876, when the Medical Qualification Act removed the restrictions that the GMC had introduced to prevent qualification on grounds of gender. In 1877 the King’s and Queen’s College of Ireland, which later became the Royal College of Physicians of Ireland (RCPI), was the first body in Britain and Ireland to allow women to register. On 10 January 1877 the College voted, by a majority of one, to admit women. Women could now sit their examinations, register and get a licence to practise medicine.

It would turn out to be a groundbreaking decision for Dr Dickson, who was then celebrating her 11th birthday. As her ambition to become a doctor grew, other doors also opened. When she was 19, in 1885, the RCSI agreed to extend its educational facilities to women and to recognise the examination results from the London School of Medicine for Women. The RCSI was the first college in Great Britain and Ireland that allowed women to take its examination. In 1886 the RCPI and the RCSI agreed to a conjoint degree that was registerable.

Dr Dickson was now 20 and it appeared that the medical world was finally encouraging the ambitions of female doctors. But rules and regulations often take a long time to change hearts and minds. The road ahead remained littered with barriers of prejudice and ignorance towards women like Dr Dickson.

But her father was having none of it. Thomas Dickson was a progressive Member of Parliament for the Irish Liberal Party and he believed in women’s rights and education. Besides, he also saw how well Emily had cared for her mother for over a year after leaving school. He believed that her ambition to become a doctor was well-founded and he backed her all the way. Still, it was not going to be an easy journey.

She initially applied to Trinity College Dublin (TCD) to study medicine, but was turned down because she was a woman. She had been supported by TCD’s medical faculty, but her arrival was a step too far for the College’s theologians. TCD’s loss was the RCSI’s gain, however, and she subsequently went on to study at RCSI in 1887, the only female medical student in the class. She then trained in midwifery at Dublin’s Rotunda Hospital.

She obtained the Licence of the RCSI and RCPI in 1891 and graduated from the Royal University of Ireland (RUI) in 1893. That same year, at the age of just 27, she became the first woman to be elected Fellow of the RCSI, or indeed of any college of surgeons in Britain and Ireland.

After graduation, she won an RUI travelling scholarship to Vienna and Berlin for six months. In Berlin, as had happened in Ireland, she encountered more roadblocks to her ambitions. She was unable to gain a place on courses at many clinics because they refused to admit women.

When she returned to Dublin she applied for a resident post in the Rotunda, but was refused the job because she was a woman. In 1894, she decided to set up practice in the city.

On the opening of the Extern Department for Diseases of Women at the Richmond Hospital, Dublin, she was appointed as its first gynaecologist (1894-9) and served as Assistant Master (1895-8) and as supernumerary assistant (1898-9) at the Coombe Lying-in Hospital, Dublin.

In 1896, she was appointed an Examiner in Midwifery at the RCSI. But not everyone rejoiced to see a woman in such a position. Many of the students objected to a female examiner and busied themselves collecting 14 pages of signatures petitioning against her appointment. Students at the Catholic University Medical School were equally angry at her appointment and joined the protest. The objections failed to move the RCSI, however, and Dr Dickson retained her position.

In 1899, on the cusp of the new century and at the age of 33, her life changed course. She married businessman Robert Martin. They had four sons and one daughter. Her eldest son followed in her footsteps. Russell Dickson Martin (1901-98) had a distinguished career with the Canadian government as a doctor working among the Inuit people in the Arctic, and from 1939 for the Department of Health for Scotland in the Highlands and Islands Medical Service.

Her daughter Elizabeth was educated in Oxford, where she met and married fellow student Kenneth Clark, a historian and writer best known for the BBC TV series <em>Civilisation</em>.

Throughout her life, Dr Dickson encouraged other women to enter the medical profession, gave lectures and wrote a number of papers in professional journals.

While in Vienna, she wrote to the <em>British Medical Journal</em> on the importance of women doctors in the workhouses. She supported the National Society for the Prevention of Cruelty to Children and the Irish Association for the Prevention of Intemperance. In 1895 she presented a paper on the urgency of having women as Poor Law Guardians in Ireland.

In 1915, after moving to England where her husband had joined the British Army, she returned to work as a doctor. She became the sole breadwinner for the family after she and her husband separated. She was assistant medical officer at Rainhill Mental Hospital, Lancashire, and subsequently worked in general practice and as medical officer of health, visiting local service convalescent homes and later worked in London and in a mining community in south Wales.

For much of the rest of her life she suffered illness, but continued to work until about two months before her death. Dr Emily Winifred Dickson died on 19 January 1944 at the age of 77.

During most of those 77 years, she had helped to break down formidable barriers against women’s progress in the medical profession. But possibly inspired by her father’s example as an Ulster Liberal Member of Parliament, she was also involved in the wider issues of women’s equality and was committee member of the Irish Women’s Suffrage from 1896 to 1898.

It was fitting then that, exactly 100 years later, a female President of Ireland came to the Coombe Women and Infants University Hospital in Dublin to pay tribute to Dr Dickson, once the hospital’s Assistant Master.

Opening the Winifred Dickson Suite at the Coombe on 2 April 1998, President Mary McAleese said: “Appropriately, the suite is called after a lady who herself broke new ground in 1893 when she was the first woman elected as Fellow of the Royal College of Surgeons in Ireland and again in 1895 when she was the first woman appointed Assistant Master of the Coombe. It seems, though, that the then Board had reservations about a lady taking on this arduous role and took a while to confirm her appointment! Thankfully things have changed a lot since then… and now we are even let run for the office of President!”

Thanks in no small way to the trailblazing career of Dr Emily Winifred Dickson.