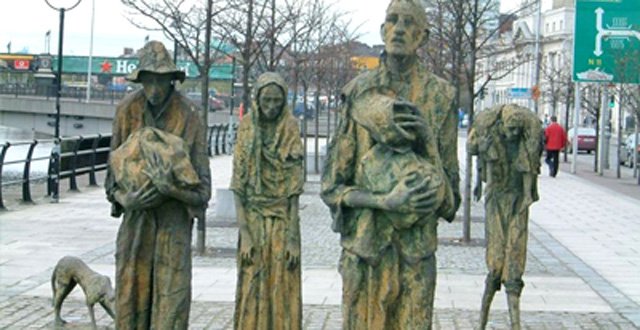 Plans are underway to honour Canadian doctors and nurses who died from fatal diseases contracted while treating thousands of Irish men, women and children who fled the Great Famine in Ireland seeking refuge in Canada.

Chief among these medical heroes was Dr George Robert Grasett, who chose to care for Irish patients, knowing it would mean almost certain death from typhus, in an act of courage that must surely stand among the most noble in the annals of medicine.

Now, generations later, the Irish in Canada plan to dedicate a park to Dr Grasett next summer, highlighting the largely untold story of how this young doctor and many others in Canada’s medical profession put the lives of Irish Famine refugees before their own during those harrowing years.

“Dr Grasett was an exceptional person, but he wasn’t alone. This park will mark a profound chapter in the medical history of Toronto,” Mr Robert G Kearns, Chairperson and founder of Ireland Park Foundation, which is honouring Dr Grasett, told the <strong><em>Medical Independent</em></strong> (<strong><em>MI</em></strong>) in a telephone interview from Toronto.

The Foundation’s first project was the creation of the award-winning Ireland Park on the Toronto waterfront, commemorating the Irish migrants who died in the city in 1847.

Over 38,000 Irish migrants arrived in Toronto in that terrible summer of 1847, the worst year of the famine. They came into a city that had a population of only 20,000, Mr Kearns explained.

The authorities in Toronto mounted what must have been a gargantuan task to assess, process and filter this number of people through the city and onwards to their destinations, though thousands never made it any further.

At the centre of the effort in Toronto was the city’s medical profession, which attended to those afflicted with typhus, a condition widespread amongst the migrant population.

“It was a staunchly British city, suspicious of new arrivals,” the local <em>Globe and Mail</em> newspaper noted, “but one Protestant (Dr Grasett) chose to help the Irish Catholics, knowing it would kill him.”

It would surely have been tempting to look the other way. After all, Dr Grasett would have been familiar with news reports across Canada that instilled fear of the famished Irish and the diseases they had contracted.

In July 1847, the <em>Montreal Witness</em> reported the story of the Irish refugees like this: “The immigrants are carrying their destitution and disease to every locality of Canada West into which they have yet penetrated. Wherever the immigrants go… the inhabitants are complaining of the burden of pauperism and disease thrown upon them,” the report said.

“Some were sick with typhus, or ‘ship fever’ as it was called. There was no cure for it at the time. But Dr Grasett, whose father and grandfather were doctors trained in Dublin, sought to treat these people,” Mr Kearns said.

“Dr Grasett, whose older brother, Henry Grasett, was the Dean of St James’s Anglican Cathedral, came from an established Anglican background. He was born in Portugal in 1811, his family moved to Canada in 1815 and he came to Toronto as an adult in 1842.

“Dr George Grasett was well-off and part of the establishment. He had access to every smart drawing room in the city. He could have kept attending his private patients, the wealthy and powerful. But he didn’t. He chose instead to lobby his brother to become the attending physician at the newly-opened Emigrant Hospital,” Mr Kearns said.

The hospital had been established to serve the thousands of Irish in desperate need of medical attention. Dr Grasett was also a founding member of the Toronto General Dispensary, which provided medical and surgical advice and medicines to the indigent sick. “You could say he was the first Médecins Sans Frontières doctor in Canada. And he knew he would die helping these people.”

On 18 June 1847, Dr Grasett was appointed to the post of Chief Attending Surgeon at the Emigrant Hospital. He was just 36 years old. But less than a month later, he was dead. After contracting typhus, he passed away on July 16, 1847. His obituary praised his unceasing devotion to the “amelioration of the sufferings of his fellow men, irrespective of hire or reward”.

The report in the <em>Montreal Witness</em> said: “Dr Grasett of Toronto, of whose benevolent efforts the papers speak most highly, has fallen a martyr to the duties as immigrant physician there. He died of the fever.”

Dr Grasett was not the only medical officer to die helping the stricken Irish. Dr Joseph Hamilton died of typhus on 15 November 1847. In <em>The Medical Profession in Upper Canada 1783-1850</em>, Dr FC Mewburn was quoted as saying: “The doctor was a man of high attainments, most gentlemanly in manner and appearance. He had practised in London, England, as a physician but came to Canada in 1835. He moved to Toronto and died in the discharge of his duty there, having contracted typhus at the Emigrant Hospital.”

Nurse Susan Bailey was only 32 when she died in August 1847. John McNabb and Richard Jones were orderlies at the hospital. Richard passed away on 24 August 1847, and one day later, on 25 August, John died.

Dr George Robert Grasett Park is situated on the site of the Emigrant Hospital, highlighting not only the humanitarian contribution of those medical professionals who died helping the Irish, but also the medical history of the city.

“Dr George Robert Grasett Park will commemorate the sacrifice of many remarkable individuals who died while tending to the sick and dying Irish migrants in Toronto during the summer of 1847. These courageous individuals played an important role in the medical history of the city, as well as the history of migration and settlement of Toronto,” Mr Kearns told <strong><em>MI</em></strong>.

The contribution made by Canada’s medical profession extended far beyond Toronto as the Irish refugees arrived in their thousands to other cities, Mr Kearns emphasised.

“Some 70,000 arrived in the city of Montreal that had a population at that time of just 50,000. In a communal grave in Pointe Saint Charles on the site of the fever sheds, about 6,000 Irish are buried. The mayor of the city died, as well as numerous members of the Grey Nuns order, hospital orderlies and at least two doctors.”

The <em>Annals of the French-Canadian Sisters of Charity</em>, known as the Grey Nuns because of their habits, tell how they cared for the Irish in the fever sheds and provided homes for widows and orphans.

The annals, translated from French and now part of the digital Irish Famine Archive, make for chilling reading, with eyewitness accounts of the suffering of Famine migrants: “Several weeks have passed in the hospitals, where hundreds of people succumb to the destructive waves of typhus. The priests and the nuns are still standing, but their footsteps are wavering. Only courage maintains their position.

“In 1847, the Grey Nuns came to the rescue of Irish immigrants suffering from the typhus epidemic. These immigrants arrived already afflicted with the disease and were quarantined in sheds in Pointe Saint Charles. That same year, four Grey Nuns died from the disease. It was from this time that the Grey Nuns developed their professional expertise, not only in nursing, but also in management and pharmacy, among other things.”

Workers who were building Montreal’s Victoria Bridge, which was completed in 1859, discovered a mass grave and marked it with a large black rock. The inscription on the rock reads: “To Preserve from Desecration the Remains of 6,000 Immigrants Who died of Ship Fever AD 1847-48.”

On Partridge Island in New Brunswick, about 1,000 men, women and children and the doctor who looked after them and who also died from typhus are buried in a communal grave. In 1847, the small 24-acre island received 15,000 during the summer, plunging hospitals and other facilities into chaos. Among the dead that summer was a young physician named James P Collins. Dr Collins died only three weeks after going to the island to help the Irish refugees. He was just 23 and recently married.

In Grosse Ile in the St Lawrence estuary near Quebec City there are about 6,000 Irish men, women and children buried. At least four doctors died there. A monument at the mass graveyard gives the names of the four doctors as John Benson, Alex Pinet, Alfred Malhiot and John Jameson, who “died of typhus fever contracted in the faithful discharge of their duty upon the sick”.

Dr John Benson was himself Irish. He was a 63-year-old physician with experience in the fever hospitals in Ireland, who had been evicted from an estate in Castlecomer, Co Kilkenny. He arrived at Grosse Ile on 20 May, volunteered to assist Dr George Mellis Douglas, the local medical superintendent, contracted typhus and died within a week.

Those who survived and made it as far inland as Toronto fared better, Mr Kearns said. He emphasised that Ireland owes a huge debt of gratitude to the medical community in Canada who came to the aid of the stricken Irish.

“We believe that Dr George Robert Grasett Park will be the first and most significant public space and memorial with public art dedicated to the medical community anywhere in North America, maybe anywhere in the whole hemisphere of the Americas. It’s right in the middle of downtown Toronto, on the original site of the fever sheds. This is part of the DNA of Canada; this history of taking in migrants when others wouldn’t do so began in the 1840s and has persisted up to the present day.

“Canada prides itself today in its standard of healthcare and one could argue that the origins of the nation’s healthcare began in that summer of 1847.