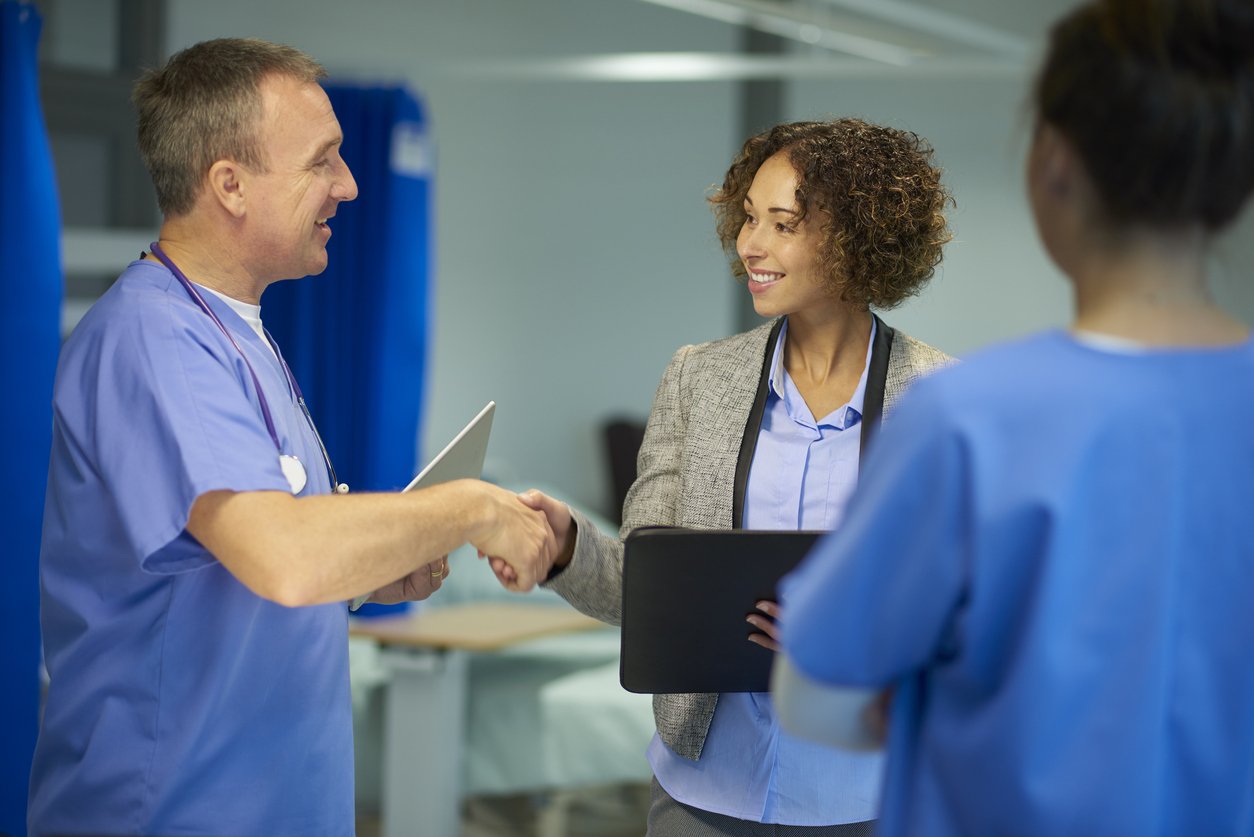 a mature hospital doctor is chatting with a team of fellow medical professionals , including a suited woman who could be a sales professional or administrator

To address the extreme capacity deficits in our public hospital and mental health services, it is essential that a date is confirmed when Minister for Health Stephen Donnelly’s “unambiguous commitment’’ of a year ago will be implemented to end the pay inequity and restore parity for consultant contract holders (of all categories) who took up contracts since 2012.

The failure to end the inequity for all is significantly undermining trust and driving highly trained specialists away from public hospitals. It is the key factor that is adversely delaying the timely provision of care to public hospital patients and a root cause of the growing consultant recruitment and retention crisis and large number of permanent posts that cannot be filled.

Analysis of the posts advertised by the Public Appointments Service (PAS) so far in 2021 reveals that many hospitals and mental health services continue to struggle to fill their posts, with original deadlines for many competitions having to be extended up to four times due to a lack of applicants.

Ireland’s lack of competitiveness in recruiting and retaining consultants is attributable to the consultant salary inequity and the fact that more attractive terms are on offer to consultants in other countries. Average salaries in Australia, Canada, and the United States are around 50 per cent above those being paid to consultants in Ireland appointed prior to 2012 and around double those paid to those contracted post-October 2012.

Ending pay discrimination and restoring pay parity for consultants contracted since 2012 has the potential to result in an outcome that is better than cost neutral, when account is taken of the resultant patient benefits, shorter lengths of stay in hospital and savings. The loss of our highly trained specialists has resulted in the employment of agency staff at often twice the cost of permanent appointees. Overall medical/dental agency spend increased to €94 million in 2020, which is more than two-and-a-half times the 2012 costs. This does not include additional agency spend in the voluntary services.

The cost of resolving the two-tier consultant pay inequity has been calculated by the HSE at €25.7 million. In budgetary terms, this is approximately 4 per cent of the €604 million Winter Plan 2020-2021 and less than 1.4 per cent of the €1.881 billion additional allocation to Covid-19 health measures in 2021.

The recruitment crisis has also manifested itself in the appointment of 109 doctors to consultant posts who are not on the Medical Council Specialist Register as at the end of April. This is a serious indictment of Government policy and is gravely damaging the delivery of timely, quality care to patients, as outlined by the former President of the High Court, Justice Peter Kelly, to then Minister Simon Harris and health service management in May 2018. The issue has more recently been described as “very serious” by the HSE in terms of the risk it poses to patient safety and quality of care.

These false economies highlight the importance of restoring pay parity for consultants contracted since October 2012, so that our health service is repositioned to be more competitive and better equipped to fill the increasing number of vacant permanent posts with doctors on the Medical Council Specialist Register.

However, the draft Sláintecare consultants’ contract proposals presented to the Association contain terms which specialists here and abroad have strongly outlined must be modified in negotiations. If these terms are not modified, those specialists which our public hospitals desperately need, will not take up the posts in our public hospitals and mental health services. This will add to the one-in-five permanent consultant posts that cannot be filled and will exacerbate the record number of patients awaiting public hospital consultant appointments and treatment, which are fast approaching one million people waiting for public hospital care.

It is unacceptable that over 263,000 people are waiting over a year for a consultant outpatient appointment, more than six times the equivalent in 2014. Equally unacceptable is the number waiting longer than a year for hospital inpatient/day case treatment, which has increased from 386 to 20,284 in the past nine years. This is a 52-fold increase since 2012, when the then Minister for Health imposed pay discrimination on hospital consultants contracted after that date.

While the launch of Sláintecare in May 2017 set out significant plans to address timely access to care, analysis shows waiting lists have continued to grow in the four years since. The number waiting for an outpatient appointment has increased by over 173,000 (36 per cent) since May 2017, with a record 14,263 ‘long-waiters’ now waiting more than 18 months for inpatient or day case treatment – an increase of more than 8,000 (133 per cent) patients since Sláintecare was launched.

Comparing the waiting list data and known consultant vacancies over the past decade confirms a strong relationship between growing waiting lists and increasing levels of consultant posts that are vacant. This record figure of over 907,000 people awaiting hospital care will never be addressed without filling the one-in-five permanent hospital consultant posts that are currently not filled as needed and appointing additional consultants. Ireland currently has the lowest number of medical specialists per 1,000 population in Europe, 42 per cent below the EU average.

If urgent action is not taken to address the consultant pay parity issue and the recruitment and retention crisis, it could take over a decade or much longer to address the backlog of deferred hospital care and bring outpatient waiting lists under control.

The upcoming Budget and the revised National Development Plan (NDP) for the period up to 2030 present an opportunity to equip public hospital and mental health services with the required capacity to provide for the backlog in deferred care due to the pandemic and ongoing, increasing demand. Budget 2022 and the revised NDP must fast-track in the shortest possible timeframe the opening of an additional 6,000 acute hospital beds and 4,500 community step-down and rehab beds. At least half of these should be delivered within the first three years of the plan. There is also a need to more than double current critical care capacity to over 640 ICU beds to avoid delays in ICU admissions, cancellation of essential surgery appointments, and to cater for any future increases in Covid-19 cases.

The Association’s recent Pre-Budget submission includes 19 key recommendations on how public hospital and mental health services can be resourced to deliver timely care to patients and adequately address the challenges presented by demographic changes, technological requirements, unmet need and other pressures on the system. Among these recommendations is the need for Budget 2022 to retain the additional funding for Covid allocated this year and redeploy funds to address the severe deficits in bed capacity, hospital facilities and consultant staffing across our public hospital and mental health services.

In addition, a multi-annual programme of capital funding is required to mitigate against the €1.34 billion of capital underinvestment that has occurred over the past decade in our public hospitals. This should include funding to bring operating theatre capacity, equipment and other facilities up to acceptable levels and for the implementation of a national electronic health record. The 2022 mental health budget also needs to be set at a realistic level given the historic deficits in the service and the impact of the pandemic on the population’s mental health.

The Association committed to consultant contract negotiations in September in good faith with the objective that they will resolve all the matters of concern to our members which are impacting adversely on the recruitment and retention of consultants. If the health service management and Minister Donnelly do not urgently honour the Minister’s ‘unambiguous commitment’ a year ago to end the discrimination against all consultants contracted since 2012, trust will be irredeemably damaged, exacerbating the consultant recruitment and retention crisis further.

Unless the health service management engages in meaningful contract negotiations the opportunity to recruit the consultants our public hospitals desperately need to provide timely care to their patients will be lost. This will create a watershed situation where decade-long capacity deficits and challenges in public hospital and mental health service will deteriorate further.

While the pandemic is far from over, there are wider serious issues impacting on our health service which must be urgently addressed. The Association will persist in our efforts to bring to light the severe shortcomings hospital consultants face and, more importantly, how this adversely affects the wellbeing and healthcare outcomes of their patients.