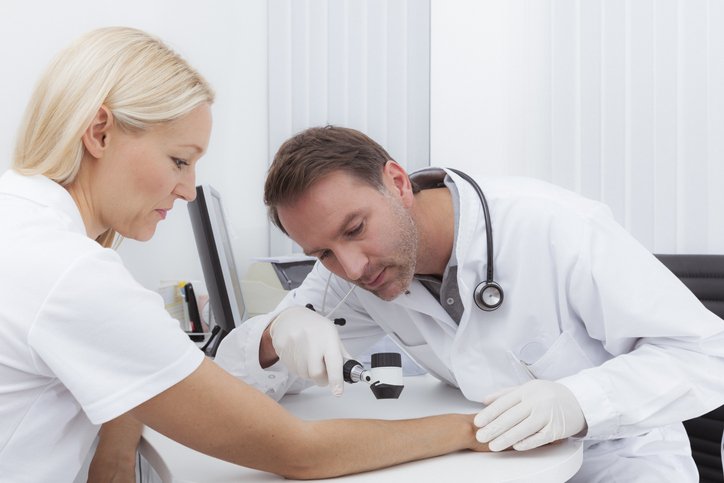 doctor doing a dermoscopy dermoscopy prevention on a female patient in his office.

The Gathering Around Cancer conference also heard from Dr Fergal Kelleher, Consultant Oncologist at St James’s Hospital in Dublin, who delivered a talk titled ‘Melanoma update’. Dr Kelleher provided an overview of some trial data from a number of studies and said that it is often the case in trials that there are an insufficient number of events to perform an overall analysis. However, one five-year study on patients with resected stage 3 melanoma, the COMBI-i trial, showed that 12 months of adjuvant therapy dabrafenib plus trametinib resulted in a longer duration of survival without relapse or distant metastases than placebo, with no apparent longterm toxic effects.

Dr Kelleher also reported on the CheckMate 238 phase 3 trial, which showed a 1:1 ratio of treatment with adjuvant nivolumab vs adjuvant dupilumab and demonstrated improvement in survival for nivolumab vs dupilumab, as well as an improvement in distant metastases-free survival for nivolumab. Only 211 of the anticipated 302 overall survival events were observed at four years, said Dr Kelleher, with a statistical difference between the treatment groups in terms of survival. He also touched on the KEYNOTE-054 trial, which showed that in five-year median follow-up, adjuvant pembrolizumab prolonged progression-free survival, with a hazard ratio of 0.57 and a highly statistically-significant P value compared to placebo. Dr Kelleher also presented case studies and told the conference: “It’s really important that we have these adjuvant therapies available to us, because melanoma really has a proclivity to disperse widely.”

In the metastatic setting, he said “there has always been a difficulty with the combination of immunotherapy and molecularly-targeted agents in melanoma” due to the potential for severe hepatotoxicity. However, he drew attention to a study on a triplet regimen – the IMspire150 trial – which was published recently in Lancet Oncology. This was the first trial of its kind to demonstrate that it is possible to successfully combine immunotherapy and molecularly-targeted agents for metastatic melanoma or unresectable stage 3 melanoma and is “a real finding and a true advance in the treatment of this disease”