Chemotherapy and Covid-19 — assessing the outcomes 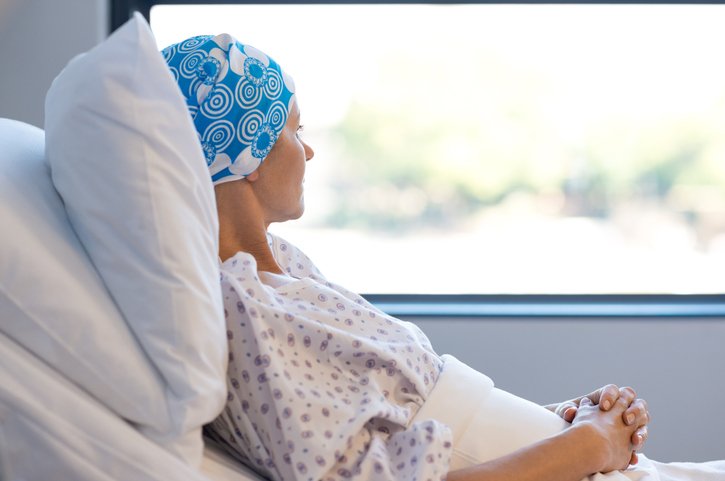 Young woman in bed suffering from cancer. Thoughtful woman battling with tumor looking out of window. Young patient with blue headscarf recovery in hospital on bed.

During the segment of Gathering Around Cancer 2020 dedicated to issues around cancer care during Covid-19, the attendees heard a presentation from Dr Melissa Lumish, Internal Medical Specialist in Memorial Sloan Kettering (MSK) Cancer Centre in New York, US, on the theme ‘Chemotherapy and Covid-19: Outcomes in patients with cancer’. Dr Lumish was one of the first to publish research on Covid-19 and its effects on cancer care early in the pandemic. She provided an overview of the timeline of the virus, from its emergence in China, to the first infections and ICU admissions in the US, to the emergence of early literature. She presented data on cancer and Covid-19 and told the attendees: “We can see that probability of a severe event was much higher in those with cancer than in those without cancer… lung cancer and cancer with lung metastases are associated with a higher rate of severe Covid-19 events, ICU admission, death and invasive ventilation.”

Dr Lumish provided data from a number of studies, with one suggesting that people who received cytotoxic chemotherapy did not have worse outcomes, which led to further studies with conflicting conclusions on chemotherapy and its effect on death from Covid-19. “A large study that compiled several cohorts from the US, Canada and Spain… [suggested that] cytotoxic chemotherapy was not associated with higher rates of mortality, while progressive cancer and the number of comorbidities was actually associated with increased mortality,” said Dr Lumish. “In China, two studies were performed with smaller cohorts… survivors of Covid-19 illness had a lower percentage of patients who had recently received chemotherapy, whereas a higher percentage of non-survivors had recently received chemotherapy, with no difference seen for immunotherapy.” However, these studies had limitations, she said.

This led Prof Lumish and her colleagues to question whether death was an appropriate clinical end-point, particularly among patients with cancer, who would be at increased risk of death relative to the age-matched population at baseline. The clinical end-points looking at severity of illness differed across the studies, making cross-study comparisons and patient applicability challenging, she explained. “We generated two hypotheses,” said Dr Lumish. “We first thought that cytotoxic chemotherapy within approximately one month of Covid-19 diagnosis would be associated with severe or critical Covid-19 events. Secondly, we hypothesised that clinical and laboratory covariates could be identified that would predict the risk of severe or critical Covid-19 events.”

Dr Lumish and colleagues conducted a retrospective study of all patients who tested positive for Covid-19 at MSK during a one-month study period at the height of the pandemic, followed by a two-week observation period. Of the 309 patients recruited, Dr Lumish and her colleagues looked at the rate of severe or critical Covid-19 events in that population relative to those who had tested negative for SARS-CoV-2 and found that the rate of events was 39 per cent higher than that reported for the average population with Covid-19, compared to 17 per cent in the SARS-CoV-2-negative cohort, confirming that these critical and severe events were related to Covid-19, rather than the underlying cancer. They also evaluated the cohort to see if patients with specific subtypes of malignancy did worse than others. “We found that patients with lung cancer and haematological malignancies had a higher proportion of severe or critical events,” she told the conference. “Testing our first hypothesis, we saw that recent cytotoxic chemotherapy was not associated with adverse Covid-19 outcomes, which was contrary to our primary hypothesis.”

Recent immunotherapy or targeted therapy were also not associated with adverse Covid-19 outcomes, Dr Lumish added. Chemotherapy timing was also considered as a factor and patients who had received chemotherapy at either 14 or 90 days were examined. “The association was similar, regardless of the time interval,” she explained. “Age ≥61 was associated with increased risk, similar to what has been reported in the literature and publicised, and haematological malignancy and lung cancer were also associated with increased severe or critical Covid-19 events, with hazard ratios of approximately two.” Lymphopaenia at the time of Covid-19 diagnosis was also associated with worse outcomes and neutropaenia at baseline, but not at Covid-19 diagnosis, was associated with increased severe or critical Covid-19 events. “Notably, both of those covariates used a threshold, such that lymphopaenia was defined as absolute lymphocyte count of less than one,” said Dr Lumish.

She concluded by telling the delegates: “We concluded that cancer therapy is not associated with adverse Covid-19 outcomes; we did find that there is a higher risk for severe Covid-19 outcomes for patients with haematologic malignancy and lung cancer, lymphopaenia at Covid-19 diagnosis and older age, and there was a possibility that pre-Covid-19 neutropaenia was also associated with worse outcomes.” In terms of follow-up work, Dr Lumish noted that there is still conflicting information regarding the risk associated with chemotherapy and she and her colleagues have published a second manuscript on MedArchives, which demonstrates that chemotherapy associated with neutropaenia specifically may influence outcomes, while chemotherapy alone does not seem to have an effect.