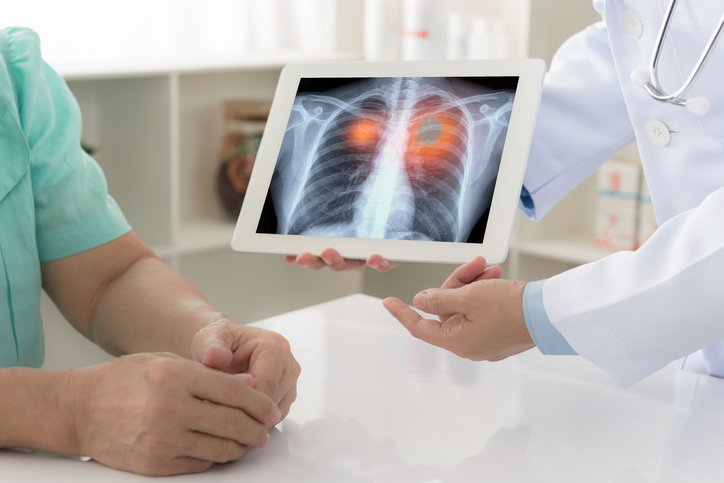 The conference heard from Dr Jarushka Naidoo, Consultant Medical Oncologist at Beaumont Hospital, Dublin, and Chair of the Lung Cancer Group at Cancer Trials Ireland. Dr Naidoo delivered an update on lung cancer research for 2020 and told the attendees: “There have been so many advances in lung cancer that it was challenging to condense them,” and she explained that therefore she would focus her presentation on advanced non-small cell lung cancer (NSCLC). Dr Naidoo spoke about two aspects in the management of NSCLC, namely targeted therapy and immunotherapy. “From a targeted therapy perspective, we can see that NSCLC, particularly adenocarcinoma, is truly the ‘poster child’ for personalised medicine,” she said. “With our increase in genomic testing in lung adenocarcinoma, over 14 genomic targets with therapeutic options have been identified over the last number of years. Many of these genomic targets have successful targeted therapies that are either in latephase clinical trials or are approved by regulatory bodies and most of these agents yield an improved outcome in terms of survival, as well as response rates that range anywhere from 35-to80 per cent.”

Dr Naidoo provided an overview of molecular subtypes in NSCLC and spoke about EGFR mutant lung cancer, and she discussed some results from therapies studied in the FLAURA trial. She continued: “We have seen that targeted therapies for EML4-ALK have really come on in leaps and bounds in the last five-to-10 years,” and she added that at ESMO conference earlier this year, data was presented from the CROWN study to show the benefit of a new targeted agent, lorlatinib, for the first-line treatment of ALK-positive lung cancer. It showed promise in terms of objective response rate, progression-free survival, and intracranial response compared to a historical comparator, however it is not approved by any regulatory agencies yet, she said.

Dr Naidoo told the attendees: “2020 has been a busy and fruitful year for NSCLC in the advanced setting. In EGFR, we have had the FLAURA study… and just to touch on early-stage lung cancer, we have seen a DFS benefit for adjuvant osimertinib. In ALK-positive lung cancer, the CROWN study demonstrated that lorlatinib may have efficacy in the first-line setting. “In ROS1, we have seen a benefit for entrectinib and this enters the arena alongside crizotinib. For patients with RET fusions, historically there were no targeted therapies that demonstrated efficacy for this subset of NSCLC, but we now have two efficacious therapies in selpercatinib and pralsetinib.” Dr Naidoo continued: “For METexon14+ we have capmatinib and tepotinib and for KRAS G12+ [sotorasib and adagasib] are not yet FDA-approved, but have demonstrated efficacy in the phase 1 and 2 settings. And finally, in HER2-positive NSCLC, there has been demonstrated activity for the novel antibody drug conjugate trastuzumab deruxtecan. “In the first-line setting for advanced NSCLC, we have seen approval for ipilimumab and nivolumab in PD-L1-positive NSCLC, but activity is also seen in patients with PD-L1-negative NSCLC. We have also seen approval for the combination ipilimumab/ nivolumab/platinum-doublet chemotherapy for the treatment of NSCLC.”