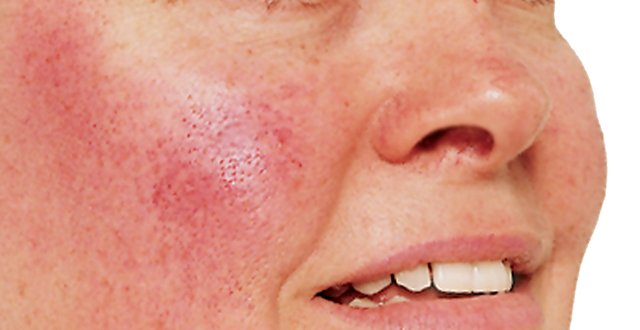 An estimated 5.46 per cent of the population worldwide is affected by rosacea, with predominance at the age of 45-to-60 years, according to a new systematic review and meta-analysis of published data.

No significant difference between men and women and no significant association between higher prevalence and latitude were observed in the study, published in the <em>British Journal of Dermatology</em> this summer.

The authors of the study, a group of researchers of the University of Copenhagen, Denmark, selected 32 studies from three databases, namely PubMed, Embase and Web of Sciences, examining 32 studies of 41 populations and a total of 26,519,836 individuals.

Twenty-two populations were from Europe, three from Africa, four from Asia, nine from North America and three from South America. The pooled proportion of individuals with rosacea was 5.46 per cent in the general population and 2.39 per cent among dermatological outpatients.

A substantial difference was observed between self-reported rosacea (9.71 per cent) and dermatologist-diagnosed (5.53 per cent) rosacea, suggesting a low specificity of questionnaires based on symptoms.

No significant association was observed between higher prevalence of rosacea and latitude.

<h3 class=”HeadC18MIstyles”>Presence of Demodex mite higher in people with rosacea</h3> <p class=”bodytextnoindentMIstyles”>Patients with rosacea were significantly more likely than controls to have Demodex mite infestation, according to findings from a study published in the <em>Journal of the American Academy of Dermatology</em>.

The evidence-based meta-analysis of the prevalence and degrees of Demodex mite infestation in patients with rosacea included 1,513 patients from 23 case-control studies.

Limitations of the study included that the inter-study variability was high, and a causal relationship could not be established by case-control studies.

“Patients with rosacea had significantly higher prevalence and degrees of Demodex mite infestation than did control patients. Demodex mites may play a role in both erythematotelangiectatic rosacea and papulopustular rosacea,” the researchers concluded.

Separately, a recent Indian study found that rosacea was found to be a statistically significant risk factor for Demodex infestation in eyelashes, irrespective of age and sex, with a higher prevalence in papulopustular variety.

The comparative, open, observational, and cross-sectional study included 41 patients diagnosed with rosacea and 41 referents without rosacea diagnosis or ophthalmic alterations. The individuals underwent a slit-lamp examination in which two eyelashes per eyelid were removed with fine forceps.

Of the 41 patients with rosacea, 31 had erythematotelangiectatic rosacea and 10 had papulopustular rosacea.

The presence of Demodex was found in 32 patients: 24 patients with rosacea diagnosis (16 of the erythematotelangiectatic subtype and eight of papulopustular subtype); and eight patients without rosacea or ophthalmic alterations (P ≤0.001).

It is now accepted that the presence of Demodex mites plays an important role in rosacea aetiopathogenesis. Demodex mite treatment may reduce the severity of the disease and slow its progressive nature.

<h3 class=”HeadC18MIstyles”>Rosacea linked to a slightly increased risk of dementia</h3> <p class=”bodytextnoindentMIstyles”>A new study has uncovered an increased risk of dementia —in particular, Alzheimer’s disease — in patients with rosacea. Importantly, the risk was highest in older patients and in patients where rosacea was diagnosed by a hospital dermatologist. The findings are published in the <em>Annals of Neurology</em>, a journal of the American Neurological Association and Child Neurology Society.

Rosacea, a common chronic inflammatory skin disorder, is characterised by elevated expression of certain proteins —including matrix metalloproteinases and antimicrobial peptides — that are also involved in various neurodegenerative disorders, such as Alzheimer’s disease and other forms of dementia.

“A subtype of patients have prominent neurological symptoms, such as burning and stinging pain in the skin, migraines, and neuropsychiatric symptoms, suggesting a link between rosacea and neurological diseases,” explained Dr Egeberg. “Indeed, emerging evidence suggests that rosacea may be linked with neurological disorders, including Parkinson’s disease and now also Alzheimer’s disease. There are certain mechanistic overlaps between rosacea and Alzheimer’s disease that may explain the observed association, albeit the pathogenic links between these conditions are still unclear.”

Further research is warranted to examine whether treating rosacea may also modify patients’ risk of developing dementia, he said.

<h3 class=”HeadC18MIstyles”>New standard classification and pathophysiology of rosacea published</h3> <p class=”bodytextnoindentMIstyles”>A new standard classification and pathophysiology of rosacea has been published in the <em>Journal of the American Academy of Dermatology</em>. Developed by a consensus committee and review panel of 28 rosacea experts worldwide, the updated system is based on the substantial advances in the understanding of rosacea gained through scientific investigations over the last 15 years.

“There has been an explosion of research on rosacea since the first standard classification system appeared in 2002, and that has resulted in a much deeper scientific understanding of this common but once little-known disorder,” said Dr Richard Gallo, Chairman of Dermatology, University of California-San Diego.

“Growing knowledge of rosacea’s pathophysiology has established that a consistent multivariate disease process underlies its various clinical manifestations, which may also potentially be associated with other systemic disorders.”

Although the cause of rosacea remains unknown, researchers have now identified major elements of the disease process that may lead to significant advances in its treatment. Recent studies have shown that the initial redness is likely to be the start of an inflammatory continuum initiated by a combination of neurovascular dysregulation and the innate immune system.

While the original classification system designated the most common groupings of primary and secondary features as subtypes, the committee noted that because rosacea appears to encompass a consistent inflammatory continuum; it now seems appropriate to focus on the individual characteristics (phenotypes) that may result from this disease process.

Observing the respective phenotypes in clinical practice will also encourage consideration of the full range of potential signs and symptoms that may occur in any individual patient, and assessment of severity and the selection of treatment may be more precisely tailored to each individual, the committee believes.

According to the new system, the presence of one of two phenotypes — persistent redness of the facial skin or, less commonly, phymatous changes where the facial skin thickens — is considered diagnostic of rosacea. Additional major cutaneous signs, which often appear with the diagnostic features, include papules and pustules, flushing, telangiectasia and certain ocular manifestations. The presence of two or more major phenotypes independent of the diagnostic features is also considered diagnostic of rosacea. Secondary phenotypes, which must appear with one or more diagnostic or major phenotypes, include burning or stinging, swelling and dry appearance.

Signs suggestive of ocular rosacea include telangiectasias on the eyelid margin and bloodshot eyes, as well as inflammation and growth of fibrous tissue on the eye. Burning, stinging, light sensitivity and the sensation of a foreign object may also occur, as well as conjunctivitis, inflammation of oil glands at the rim of the eyelids (blepharitis) and crusty accumulations at the base of the eyelashes, in addition to others.

“Although rosacea’s various phenotypes may appear in different combinations and at different times, research suggests that all are manifestations of the same underlying disease process, and that rosacea may progress not only in severity but to include additional phenotypes,” Dr Gallo said.

The committee also acknowledged the psychosocial effects of rosacea, noting that multiple patient surveys have documented rosacea’s substantial adverse impact on emotional, social and occupational well-being. They stressed that this should also be an important consideration, and suggested the development of appropriate severity scales to measure this dimension, as well as the need for further research to adequately assess rosacea’s negative effects.

In an accompanying commentary on rosacea comorbidities and future research, the committee summarised the many recent studies that have found associations between rosacea and increased risk for a growing number of potentially serious systemic disorders. These include cardiovascular disease, gastrointestinal disease, neurological and autoimmune diseases and certain cancers. Although causal relationships have not been determined, the committee noted these findings may significantly increase the clinical significance of rosacea as evidence that the disorder may be an outcome of systemic inflammation continues to mount.<strong></strong>

In addition to comorbidities, they identified a number of areas where further research may be of particular value. Recent evidence suggests rosacea may appear often in individuals with darker skin types, and the updated standard criteria can be used to determine its prevalence in various ethnicities as well as populations worldwide. In addition, recent studies have found genetic factors that might affect the disease and may also be used to identify potential further comorbidities. Data also suggest that the skin microbiome may play a role.

The committee noted that, as with the original classification of rosacea, the updated standard system is considered provisional and may require modification as the causes and pathogenesis of rosacea become clearer, and its relevance and applicability are tested by investigators and clinicians.