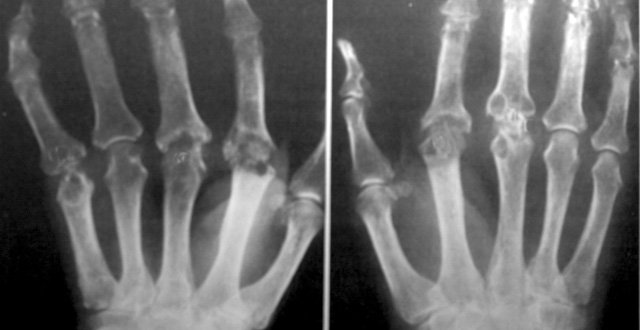 A 28-year-old female presented with a two-month history of pain and swelling in the hands and feet. She reported a steady increase in the severity of her symptoms. Initially, they were stiff and sore for the initial hour after rising in the morning but now this has extended through until the afternoon. On examination, she has tender swollen metacarpophalangeal and proximal interphalangeal joints in her hands and is sore and swollen across the balls of both feet. Initial blood tests show an elevated C-reactive protein (CRP) of 31mg/L and erythrocyte sedimentation rate (ESR) of 45mm/hr. She has positive rheumatoid factor of 65IU/ml and anti-cyclic citrullinated peptide antibodies >340. Plain x-rays of her hands and feet are reported as normal. She is diagnosed with seropositive rheumatoid arthritis and commenced on treatment with methotrexate 10mg a week and folic acid 5mg a week. She was also prescribed a prednisolone taper of 20mg daily for a week, 15mg daily for a week, 10mg daily for a week, 5mg daily for a week, and then stopping. She was referred to a clinical nurse specialist for disease and medication education, and to an occupational therapist for a joint protection programme. A review was planned for three months’ time.

Rheumatoid arthritis is a chronic, systemic, inflammatory disease affecting 1 per cent of the population of the developed world. Joint manifestations are frequently the first and most evident symptom, however, it is a true systemic inflammatory condition affecting multiple organs. Of these, an increase in cardiovascular disease equivalent to that seen with type 2 diabetes mellitus, and the occurrence of interstitial lung disease in 10 per cent of patients, represent the most significant problems. Due mainly to these factors, rheumatoid arthritis is associated with a significant increase in early mortality. Appropriate treatment decreases this risk.

Rheumatoid arthritis has classically been described as a symmetrical-deforming polyarthritis. In modern rheumatology practice, this classical aphorism no longer holds true. Our goal is to diagnose and treat rheumatoid arthritis as early and aggressively as needed to eliminate symptoms. In the early stages of rheumatoid arthritis, the disease is frequently neither symmetrical nor affects a large number of joints and this will only develop with untreated, progressive disease, a failure of treatment. Given the range of treatment options now available to us, the development of deformity also represents a failure of treatment.

Joint-pain and swelling is the cardinal feature of rheumatoid arthritis, but can also be caused by a multitude of other conditions. In rheumatoid arthritis, the small joints of the hands and feet are characteristically affected, but large joints and the cervical spine may also be involved. The lower back and distal interphalangeal joints in the hands are classically spared in rheumatoid arthritis. Joint stiffness on first walking in the morning (early-morning stiffness) is characteristic of inflammatory arthritis; they typically improve with activity. All of us can be a little creaky on first walking; a duration of at least 30 minutes is normally considered significant. The key clinical finding of rheumatoid arthritis is synovitis, a boggy, usually (but not always) tender, swelling in the joints. Due to the multi-system nature of the disease, patients may present with symptoms from other organs. The most common of these are dry, gritty eyes, exertional dyspnoea and dry cough.

Given that our aim is to diagnose and treat rheumatoid arthritis before the development of its textbook manifestations, the question then becomes, how does one diagnose early rheumatoid arthritis and differentiate it from other types of arthritis? This can be difficult, but in fact is often not that important; the key question is not whether the patient has rheumatoid arthritis or not, but whether they have an inflammatory arthritis or not. Inflammatory arthritis comprises a group of conditions, the most common of which are rheumatoid arthritis, psoriatic arthritis and reactive arthritis, although there are many others. Importantly, the treatment of these is broadly similar, if not identical, in the early stages. The diagnosis of inflammatory arthritis as a collective group, or any of the individual conditions, is made by clinician <em>gestalt</em>. There are no diagnostic criteria or definitive tests available. A number of different classification criteria have been published for these diseases. The purpose of these is to provide a homogenous patient cohort for research purposes, but they perform poorly when used for diagnosis and should not be used for such.

A number of factors increase the likelihood of a patient having inflammatory arthritis and are factored into the clinical diagnosis. Early-morning stiffness for greater than 30 minutes is a strong indicator of an inflammatory condition.

However, if they are used in unselected patients with joint pain, they are more likely than not to reveal false positives.

Many textbooks still place non-steroidal anti-inflammatory drugs (NSAIDs) as the first-line treatment of rheumatoid arthritis. This is incorrect. These drugs provide some symptomatic relief but are insufficient for the vast majority of patients with rheumatoid arthritis and delay the institution of definitive, effective treatment. They are also associated with common, potentially-severe adverse events, such as increased risk of cardiovascular disease, renal failure and peptic ulcer disease when used chronically (and rheumatoid arthritis is a chronic, incurable condition).

It is, however, remarkably effective. Concerns have existed over potential adverse events, however high-quality research studies in recent years have shown that these are largely unfounded, and that methotrexate is a far safer treatment than NSAIDs or glucocorticoids. Indeed, methotrexate treatment is far safer than having active, untreated rheumatoid arthritis.

This disease is associated with a significant increase in mortality above the general population. Methotrexate use is associated with a 70 per cent reduction in mortality in rheumatoid arthritis. The starting dose of methotrexate is 10mg once a week; this is combined with folic acid 5mg at least once a week to prevent adverse events. The dose can be up-titrated at three-monthly intervals until control is achieved; for most patients, a weekly dose of 20-to-25mg is not exceeded. Methotrexate is most commonly prescribed orally, but subcutaneous formulations have the potential for better bioavailability and reduced adverse events; the use of subcutaneous methotrexate has recently been facilitated by the entry of a pen device onto the market.

A number of other disease-modifying anti-rheumatic drugs (DMARDs) are also used. Commonly-used DMARDs include sulfasalazine, hydroxychloroquine and leflunomide. These can be utilised either instead of, or in combination with, methotrexate. Triple-therapy, consisting of methotrexate, sulfasalazine and hydroxychloroquine, appears to have efficacy close to that of the more expensive biologic agents.

If patients continue to experience significant symptoms despite DMARD treatment, the usual next step is to add in a biologic medication. In a general sense, these agents work by targeting a specific component of the aberrant inflammatory response in rheumatoid arthritis. Because they are specifically-designed medications, they less frequently cause adverse events than traditional DMARDs, albeit when these (predominantly infection-related) adverse events occur, they are more serious. There are multiple agents now available; these include TNF inhibitors (etanercept, adalimumab, golimumab, certolizumab), interleukin-6 inhibitors (tocilizumab), B-cell depleting agents (rituximab), T-cell modulators (abatacept), and Janus kinase inhibitors (tofacitinib). Less-expensive equivalents of the older biologic agents, termed ‘biosimilars’, are also becoming available. All of these agents require careful pre-assessment for latent infections (tuberculosis, viral hepatitis) and other contraindications and cautions prior to their use. These agents are life-changing for many patients, but must be started and monitored in the appropriate setting.

All of the available DMARD and biologic treatments for rheumatoid arthritis take a number of months for a full effect to be seen; we do not evaluate treatment response until after three months for this reason.

It is very likely that new treatments for rheumatoid arthritis, especially biologic agents and biosimilars, will continue to enter the market. It is less likely that any of these will prove to be significantly more efficacious than others. This is due to the inherent complexities of rheumatoid arthritis. It is increasingly recognised that rheumatoid arthritis is not one disease; rather, it is a heterogeneous mix of related conditions with a similar phenotype. The molecular basis for the initiation and continuation of inflammation is different for different groups of patients with the disease. Even within the same patient, multiple cytokines are involved in the inflammatory process, to a greater or lesser extent. The clinical implication of this is that in each individual patient, some medications, and particularly biologic agents, are more likely to work than others.

At present, we are essentially unable to identify which agent is most likely to work <em>a priori</em>. The ability to do so is the ‘holy grail’ of treatment in rheumatoid arthritis, termed ‘personalised medicine’. Extensive efforts have been underway in this field for a number of years, with no great progress to date. Again, this likely relates to the complex and heterogeneous nature of the disease. It is probable that this will change in the future and we will enter an era where we can offer patients an initial treatment for ‘their’ rheumatoid arthritis.

Rheumatoid arthritis is a common, severe, systemic inflammatory disease. Early diagnosis and prompt treatment are key to improving patients’ symptoms and prognosis. Early institution of methotrexate treatment with aggressive treatment escalation to achieve disease remission achieves optimum outcomes. In those with severe rheumatoid arthritis, the ability to predict which biologic agent is best for each individual is a crucial goal of current research