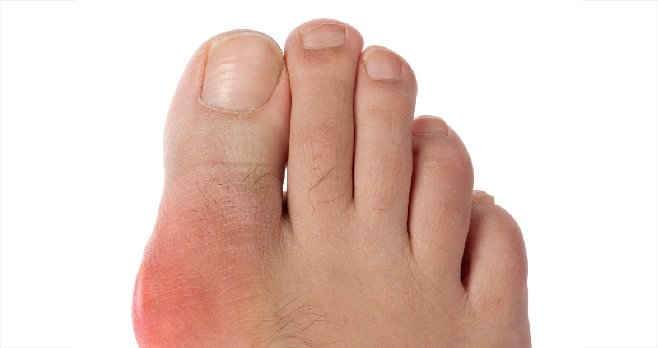 Traditionally, gout is considered to be a disease of affluence; an affliction of wealthy, rather portly men of a certain age due unlimited access to bountiful rich foods and alcohol. The historical record is littered with august and portly individuals, Sir Isaac Newton, Benjamin Franklin and King Henry VIII to name a few. These were men who wore their illness in the halls of power or in enlightenment salons as a badge of honour and pride, garnering sympathy from the ladies and a grudging respect from their unafflicted male peers (see 18th Century Punch Magazine folios below).

Gout is a disorder that is characterised by increased level of serum uric acid (UA) and deposition of monosodium urate (MSU) crystals in joints and surrounding tissues. Due in part to increased life expectancies, increasing sedentary lifestyles leading to obesity and purine-rich Western dietary habits, gout is now considered to be the commonest cause of inflammatory arthritis in the US, UK and in Western Europe.

Joints of the lower limbs, particularly first metatarsophalangeal joint, foot and ankle, are the most common areas for urate deposition. The risk of gout is increased in men by the fourth or fifth decades of life and in women by the sixth or seventh decades. Gout is also seen with increased frequency in patients with chronic kidney disease (CKD) receiving diuretic therapy and in renal transplant recipients receiving the calcineurin inhibitor tacrolimus.

Classical gout attacks present as an episode of acute pain, swelling, erythema and tenderness of a peripheral joint or bursa. A gout ‘episode’, is clearly defined using accepted diagnostic criteria, both in terms of its intensity (joint erythema, tenderness, reduced/inhibited walking ability) and duration (time to maximal pain from onset <24 hours; resolution to baseline <14 days). Gout may also present as a polyarticular flare, although more usually in patients with established disease. Textbook descriptions of gout also refer to an ‘intercritical period’ between attacks, wherein gout is considered to be asymptomatic.

Most untreated patients with a previous gout attack will experience a second episode within two years of their initial presentation. With persistent hyperuricaemia, tophaceous disease may evolve, where continuous excess of MSU deposition, leads to its precipitation into large crystalline deposits in juxta-articular tissues, which may be disfiguring. Tophaceous gout is often accompanied by a self-perpetuating localised chronic inflammatory reaction, with the accompanying leucocyte ingress and activation of bone osteoclasts, leading to destructive changes in the joint and surrounding connective tissues.

The most widely used clinical classification criteria are the combined 2015 American College of Rheumatology (ACR) and European League Against Rheumatism (EULAR) classification criteria for gout. The classification entry criterion requires the history of a prior episode of swelling, pain or tenderness of a peripheral joint/bursa before confirmation either through MSU crystal identification in synovial fluid or through achieving a score of >8 using a predefined scoring system of radiological, laboratory and clinical features. While microscopic identification of MSU crystals in synovial fluid or tophi remains the gold standard for diagnosis, due to the difficulties in obtaining a positive fluid sample a diagnosis may also be made based upon clinical features, including the history, examination, laboratory, and imaging studies.

Management of clinical gout involves an initial remission induction phase, where an acute attack is controlled, followed by the maintenance of remission. In primary care, acute attacks are usually managed by judicious use of oral non-steroidal anti-inflammatory drugs (NSAIDs). Colchicine is also effective when commenced very early during an acute attack. Oral or intra-articular corticosteroids may also be used at the discretion of the prescribing physicians, but caution should be taken to avoid chronic use.

Once remission has been obtained, ongoing prophylaxis should be considered with a drug such as colchicine (eg, 0.5mg BD) for a period of three-to-six months, during which time, urate-lowering therapy (ULT) should also be initiated and target serum urate level achieved.

First-line ULT should include a xanthine oxidase inhibitor (XOI) such as allopurinol or febuxostat as a monotherapy. Uricosuric therapy with probenecid may be used where there has been an intolerance of or contraindication to XOI agents.

It is recommended that regular monitoring of serum urate should be performed during ULT titration, with continuing measurements once the serum urate target is achieved to ensure efficacy and compliance.

The goal of ULT is to achieve a stable serum urate level target below 340microlitres/ml. In addition to specific urate-lowering medication, judicious alteration of concomitant medication, such as the cessation of thiazide diuretics, reduction of loop diuretic therapy where possible, or the preferential use of the uricosuric agent losartan in place of other angiotensin blockades should be considered.

Emerging concepts in gout and hyperuricaemia

Despite the fact that early treatment of symptomatic gout, prior to the development of multi-joint or tophaceous disease, is associated with better long-term disease control, diagnosis is often delayed, leading to poorer treatment responses and worse long-term outcomes. The often suboptimal treatment responses to ULT in clinical practice has prompted investigators to ascertain whether current criteria enable the earliest possible detection of clinical gout. Previous researchers have shown that the presence of chronic, non-episodic foot pain, which is not diagnostic for gout, may occur in the presence of hyperuricaemia. Furthermore, the presence of MSU crystal deposition using ultrasound has recently been demonstrated in peripheral joints including the first metatarsophalangeal joint MTP1 in asymptomatic sons of patients with clinical gout.

In a recent study published in the Annals of Rheumatic Diseases, the Department of Rheumatology in Tallaght University Hospital under the direction of Prof Ronan Mullan, investigated whether atypical foot pain that is non-diagnostic of gout by accepted diagnostic criteria, is associated with the presence of urate deposition in patients with hyperuricaemia. Furthermore, it investigated whether treatment with ULT reduced pain levels in these patients.

In the first part of this case-control study, hyperuricaemic individuals with atypical foot pain not fulfilling the current gout classification criteria (n=16) were compared with hyperuricaemic control patients without foot pain. Musculoskeletal ultrasound features of urate crystal deposition across the first metatarsophalangeal joints of the feet were performed in both groups. The presence of urate deposition on articular cartilage, a feature known as the ‘double contour’ (DC) sign, as well as the presence of urate tophus and bony erosions were all recorded. While the DC sign, erosion and tophus occurred in 44 per cent, 37 per cent and 37 per cent of cases, respectively, no evidence of urate deposition was seen in asymptomatic controls.

These findings indicate that persistent, non-episodic foot pain in hyperuricaemia is both associated with ultrasound features of MSU deposition and is responsive to ULT. Symptomatic hyperuricaemia occurring prior to episodic gout may therefore represent an earlier or alternative disease presentation.

Changes to internationally recognised classification criteria to include non-episodic foot pain in the presence of ultrasound features of gout may increase the sensitivity of disease classification at an early stage, leading to improved future treatment strategies and long-term outcomes.

Finally, emerging evidence suggests that gout may now be considered a multisystem disease. In addition to the direct effects of arthritis caused by urate deposition in the joints, ‘asymptomatic’ hyperuricaemia is associated with hypertension and type 2 diabetes. Hyperuricaemia is also linked to accelerated progression of CKD and may also be associated with accelerated cardiovascular disease. Recent studies show a reduction in the progression to end-stage renal disease (ESRD) when ULT is commenced during CKD stages 2-5. Furthermore, treatment with ULT febuxostat may actually reduce blood pressure in hypertensive patients with preserved renal function.

An improved understanding the variable presentations of clinical gout, as well as the potential long-term disease associations of unchecked hyperuricaemia is likely to inform future practices on the earlier institution of ULT in individuals with elevated serum levels. Improved recognition of early clinical articular gout will enable effective treatment to prevent chronic tophaceous disease to develop. Future studies will be needed t0 identify whether the early identification and treatment of hyperuricaemia will improve cardiovascular and other age-related health outcomes.