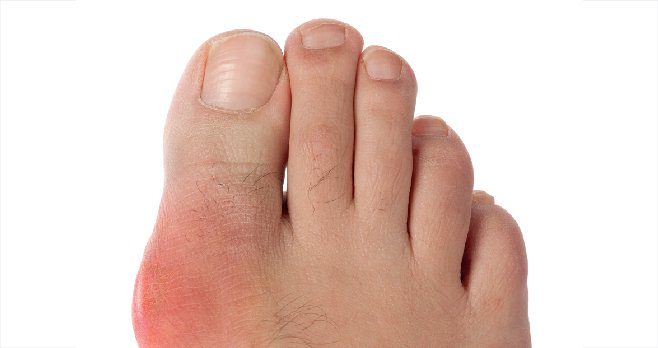 Gout, one of the most common forms of inflammatory arthritis, is caused by accumulation of excess urate crystals (monosodium urate) in joint fluid, cartilage, bones, tendons, bursas, and other sites. It is estimated to occur in around one-in-40 adults over their lifetime, with an increasing prevalence due to unhealthy lifestyles.

Gout causes sudden and severe episodes of joint pain, tenderness, warmth and swelling — ‘gouty arthritis’. Attacks usually occur in the big toe and any physical contact is painful. While gout usually affects the joint at the base of the big toe, it can affect other joints, such as the knee, ankles, hands or wrist.

Signs and symptoms of gout are generally acute — coming on suddenly, without warning. A significant proportion of people with gout experience symptoms at night.

Many people describe the affected areas as warm/hot. If several joints are inflamed at once, this is called polyarticular gout.

The swelling can very often look like an infection and the skin may peel, according to Arthritis Ireland. The pain will increase in strength, becoming most severe within 12-to-24 hours from the start of the attack.

Without treatment, the gout will probably resolve within six-to-10 days, however, appropriate medications can significantly reduce this time.

In a first gout attack, the pain may reduce rapidly and eventually go away entirely. However, in some patients, the frequency and duration of acute attacks increase over time and lead to chronic gout, which may be associated with deposits of uric acid crystals; tophi. As gout progresses, attacks may take longer to treat and there can be a lingering pain for days or even weeks after a flare. If untreated, these attacks can lead to joint and bone destruction, deformities or disabilities, which can greatly affect quality of life.

Risk factors for gout include being overweight or obese; hypertension; alcohol intake; diuretic use; a diet rich in meat, seafood, and high-fructose food or drinks; and poor kidney function. Men, of any age, are much more likely to experience gout than women, who tend to experience it post-menopause.

While diet greatly contributes to attacks or flares, individual genetic and biological make-up plays a large role in why patients develop the condition in the first place. It is common for gout to occur in families, and this can be a factor in why some people are more at risk than others.

Gout is also linked to other medical conditions such as kidney disease, diabetes, high blood pressure and some cardiovascular conditions.

Correctly diagnosing gout and differentiating gout from other inflammatory arthritic conditions, such as rheumatoid arthritis, septic arthritis, and inflammatory episodes of osteoarthritis, is important to enable correct treatment.

Gout symptoms are mostly caused by inflammatory reaction to the deposition of urate crystals, which results from an increase in serum urate level above its saturation point in the blood.

Hence, most medications that are used to target anti-inflammatory responses help to reduce the symptoms of gout.

Pharmacologic therapies focus on anti-inflammatory drugs; NSAIDs, colchicine, steroids, and urate-lowering therapy (ULT). The serum uric acid (sUA) target level for people with gout is 360µmol/L. This is the concentration at which gout is best managed, ultimately leading to less flares, if any, and reduced joint damage.

Non-pharmacologic management focuses on dietary and lifestyle changes, including weight loss and exercise.

The ACP has produced a guideline to provide guidance on the management of acute and recurrent gout in adults, which is of use to Irish rheumatologists.

According to the ACP, high-quality evidence shows that corticosteroids, NSAIDs and colchicine are effective treatments to reduce pain in patients with acute gout.

Corticosteroids should be considered as first-line therapy in patients without contraindications because they are generally safer and a low-cost treatment option, states the guideline. Steroids are among the most effective anti-inflammatory medications available and have been shown to be as effective as NSAIDs for managing gout, with fewer adverse effects.

Prednisolone at a dose of 35mg for five days has been successfully used to treat acute gout, the ACP guidelines advise.

Adverse effects associated with NSAIDs include dyspepsia and potential gastrointestinal perforations, ulcers and bleeding. Patients in whom NSAIDs may be contraindicated include those with renal disease, heart failure or cirrhosis.

Although indomethacin is commonly considered as the first-line NSAID for treatment of acute gout, there is no evidence that it is more efficacious than other NSAIDs, such as naproxen and ibuprofen, according to the ACP.

Colchicine has been in use for hundreds of years, and is an extract of a plant known as the ‘autumn crocus’. Adverse effects associated with colchicine include gastrointestinal issues (such as diarrhoea, nausea, vomiting, cramps and pain) and, infrequently, headache and fatigue. Colchicine is contraindicated in patients with renal or hepatic impairment who are using potent cytochrome P450 3A4 inhibitors or P-glycoprotein inhibitors.

Although evidence supports the benefits of using ULT for shorter durations to reduce gout flares, the benefits of long-term use (≥12 months) in patients with a single or infrequent gout attacks (<2 per year) have not been studied, the ACP notes. ULT is not necessary in cases where the patient would have no or infrequent recurrences. In cases of recurrent gout (≥two episodes per year) or problematic gout (for example, gout associated with tophi, chronic renal disease or urolithiasis), shared decision-making with the patient is warranted to review possible harms and benefits of ULT, the ACP recommends.

After resolution of acute gout, some patients may have recurrent episodes. Some patients have no or few attacks over many years, whereas others have more frequent attacks. Although evidence is inadequate to predict which patients will have more problems, those with higher serum urate levels (especially >476µmol/L [>8mg/dL]) are at greater risk. Some may prefer to initiate long-term therapy to prevent future gout attacks, whereas others may prefer to treat flares if they occur. Patients who decide not to initiate ULT can revisit their decision if they have multiple recurrences of acute gout, the ACP advises.

Febuxostat (40mg/d) and allopurinol (300mg/d) are equally effective at decreasing serum urate levels, according to the ACP guidelines. However, these drugs are associated with some adverse effects, including rash with allopurinol and abdominal pain, diarrhoea, and musculoskeletal pain with febuxostat.

Data on the most appropriate duration of ULT remains insufficient, the ACP states. Moderate- to high-quality evidence suggests that ULT reduces the risk of acute gout attacks after one year, but not within the first six months of treatment.

A short-term side-effect of ULT treatment may be a gout attack shortly after it is initiated, especially if the patient has been untreated for some time. The treatment is dissolving urate crystals already present in the joints into uric acid. This in turn goes back into the bloodstream, which can dislodge other crystals causing a new attack.

However, if taken every day, the ULT treatment will quickly reduce the uric acid to a level where this will stop happening. High-quality evidence shows that prophylactic therapy with low-dose colchicine or low-dose NSAIDs reduces the risk for acute gout attacks in patients initiating ULT. Moderate-quality evidence also shows that continuing prophylactic treatment for more than eight weeks is more effective than shorter durations to help prevent gout flares in patients initiating ULT, according to the ACP guidelines.

Arthritis Ireland guidance on gout prevention points out that flares can be caused by anything that upsets the normal balance of the body, including:

<p class=”listBULLETLISTTEXTMIstyles”>Use of medicines for other conditions.

<p class=”listBULLETLISTTEXTMIstyles”>Cut back on salt.

<p class=”listBULLETLISTTEXTMIstyles”>Keep ‘numbers’ within the recommended ranges for control of these conditions.

Patient information booklets and videos on gout, as well as information on various self-management courses, can be accessed at www.arthritisireland.ie.

ACP guidelines on gout can be accessed at: http://annals.org/aim/fullarticle/2578528/management-acute-recurrent-gout-clinical-practice-guideline-from-american-college.