Menopause – The need to open up the conversation 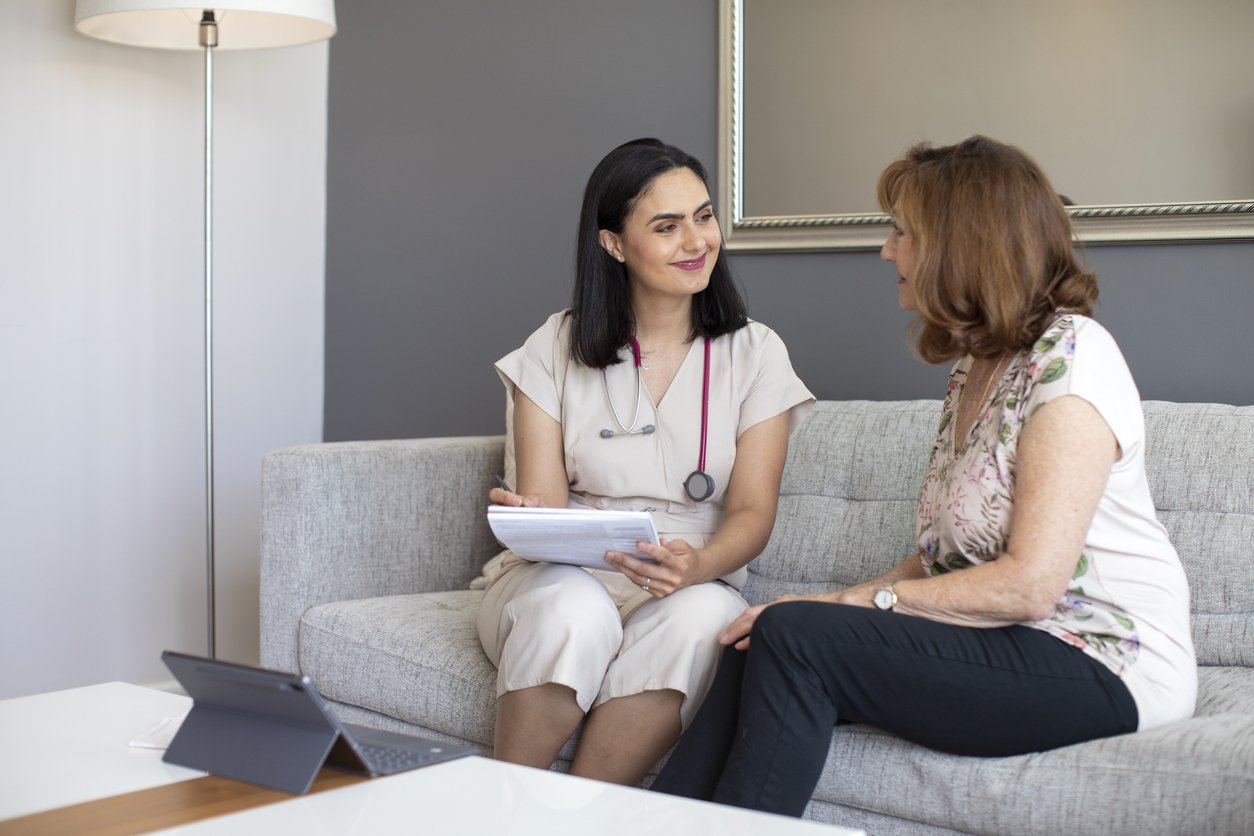 A Female doctor visiting a senior woman at her home in Cape Town South Africa.

Following extensive coverage of the menopause on RTÉ Radio 1’s Liveline programme in May, GPs are reporting an
increase in women seeking advice and support with symptoms, writes Niamh Cahill

Menopause affects all women, but it is an issue often spoken about in hushed tones. This changed in May when Ms Sallyanne Brady, founder of The Irish Menopause, took to the airwaves to inform listeners about her own experiences. Ms Brady told the Medical Independent (MI) that she appeared on RTÉ Radio 1’s Liveline after writing to presenter Mr Joe Duffy urging him to “give women a voice”. “I lost four to five years of my life from this…. I was told I was too young to have the menopause. I became suicidal and ended up in Pieta House because I couldn’t get treatment. GPs didn’t have the information and my symptoms were dismissed and ignored.”

Despite her unpleasant experience and the sub-standard treatment of some women as elucidated on Liveline, Ms Brady holds no ill-will towards doctors, whom she said “don’t always join the dots”. “Nobody wants to talk about it and that’s what has us in this mess. How can medicine and science address the issue if they don’t know it’s a problem?” Ms Brady established The Irish Menopause in 2019 to “inform, support, and guide women”. The group now has 22,000 Facebook members. A petition to Government for greater education, investment, and GP training in respect of menopause has been signed by almost 20,000 people to date.

The menopause is defined as the last day of the last menstrual period, but the term is also used to describe the many months or years before that day, when the ovaries transition from producing large amounts of reproductive hormones to producing almost none, according to menopause specialist and GP at Bray Women’s Health Centre, Dr Deirdre Lundy. There are up to 100 symptoms associated with the menopause, but around 40 are seen most commonly.
Mood changes, anxiety and depression can be experienced. Early perimenopausal symptoms such as hot flushes, sweating (especially at night), poor sleep, and mood and cognitive changes can have a significant impact.
According to Dr Lundy, who appeared on Liveline to address issues raised by women, the radio discussion marked a turning point.

“My own practice has had to stop accepting menopause consults as we cannot care for the amount of women seeking help. Thankfully there are many Irish GPs who still have capacity, but it is a struggle for some women, especially medical card holders, to get access to those doctors,” Dr Lundy told MI.

Despite the impact of Covid-19 on healthcare, which Dr Lundy said had “set us back 18-to-24 months”, she welcomed the fact that greater resources are being invested in women’s health. “There is funding out there now that was never available before. Another great innovation is the promise of the establishment of gynaecology OPD in hospital. They will be co-serviced by GPs with specialist gynaecology skills as opposed to first year SHOs.”

In a recent column in MI, Tipperary GP Dr Lucia Gannon addressed why doctors hesitate to prescribe hormone replacement treatment (HRT) for women experiencing menopause. Up until 2002, HRT was commonly prescribed internationally. However, prescriptions declined substantially after a US study prompted concern about a possible link between HRT and breast cancer. According to Dr Lundy, the study did not suggest causation but that there was a slight association in some older women over time. The authors chose to pause that part of the study until more information was gathered.

But an article by some of the study authors, later published in the Journal of the American Medical Association (JAMA), led to international concern that HRT may cause breast cancer after it was picked up by the media.
“Those of us able to actually read a scientific paper and question the claims continued to advise and prescribe, but we were a minority,” wrote Dr Lundy in an article published in MI’s sister publication, Nursing in General Practice.

“No matter how much we tried to reassure patients about the real relationship between HRT and breast cancer there were just as many other doctors warning patients to avoid it at all costs! This still happens today and is inexcusable.” Guidance published in 2015 by the UK National Institute for Health and Care Excellence has helped to change perceptions and increase confidence in HRT treatment. However, only 10 per cent of women experiencing menopause in the UK are on HRT. According to Ms Brady, women who have had breast cancer are generally excluded from receiving HRT in Ireland. She said this was not the case in the UK.

“It is just a blanket ‘no’ here and it shouldn’t be,” she maintained. Ms Brady added that much research on the topic, even today, is “fluffy and scanty”. She is calling on the HSE to design information leaflets on the menopause for GPs and healthcare clinics to ensure women have “evidence-based information”. Since the Liveline coverage, Dr Gannon has noticed “that it is much easier to persuade women to do something about their symptoms”. “It seems as if the symptoms have been validated by hearing others describe them and whether it is lifestyle measures or HRT, or both, the women I talk to are much more receptive to doing something positive about them,” according to Dr Gannon.

“I used to find that even after going through a full menopause consultation and examination and explanation, and coming to a shared decision to prescribe HRT for some, they would stop it prematurely as there was a lot of fear around the side-effects and ambivalence about taking medication for a ‘condition’ that was a natural consequence of ageing. This has changed.” Ultimately, she hopes greater awareness will lead to increased resources for women’s health and improve information on this “complex” subject. “It is encouraging that the ICGP have appointed a Women’s Health lead recently and this should lead to the development of guidelines and education for GPs. There are so many things demanding resources and attention that it is difficult to keep abreast of everything and of course Covid and the cyberattack did nothing to help. “It has taken a long time for doctors and patients to forget the headline warnings about HRT, but it may be happening now thankfully.” A women’s health taskforce was established in 2019 and Budget 2021 saw €5 million allocated to a “women’s health fund” to help deliver taskforce targets.

Another positive development is the desire among GPs to learn more about menopause in order to help patients. More than 1,500 GPs attended a recent ICGP webinar to hear a talk by Dr Caoimhe Hartley, who has launched a dedicated women’s health and menopause clinic in Dalkey, Co Dublin. Speaking to MI, Dr Hartley said she regularly receives emails and referrals from other GPs about challenging cases. “There has been a definite increase in the level of interest among both GPs and women in the last month,” she said. “There has been more media coverage of menopause and HRT also. This is in part, I believe, due to the increasing evidence that menopause is a time of medical importance for women – it is when we see changes in our cardiovascular, neurological, musculoskeletal and psychological health.”

Against the background of a lack of accessible evidence-based information, Dr Hartley believes it is incumbent on healthcare providers to “interpret the research and translate the benefits and risks to women”. “It is our job to recognise menopause as a possible (and treatable) cause of symptoms that can impact quality-of-life for some women. On a society level, we are totally youth obsessed so some of the barriers to discussion on this topic may be due to stigma around ageing. There is also a cultural disinterest in targeting ‘older’ women. “I think as a GP who is specialising in this area and is passionate about women’s health in general, the responsibility is on us to start the conversation and to provide accurate, reliable information for the women we care for.”