From pain to performance — FAI 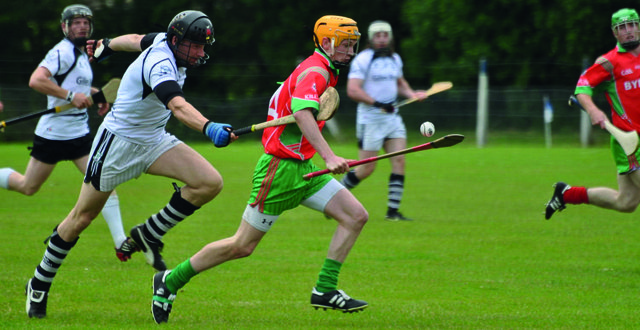 <span lang=”EN-GB”>A 30-year-old male inter-county hurler presented to the clinic with bilateral hip pain, with symptom duration of three years. The patient had a history in keeping with femoroacetabular impingement (FAI), and reported pain while twisting and turning and substantial stiffness following activity, although was still engaged in full training and competition. His symptoms had failed to resolve with conservative management. </span>

<span lang=”EN-GB”>Upon assessment, the patient had a positive FADIR (flexion, adduction and internal rotation) test and had radiological signs indicative of FAI. The patient was subsequently assessed on all of the functional assessments mentioned above and displayed lower levels of acceleration, agility and range of motion (ROM) compared to the average healthy control group scores. </span>

<span lang=”EN-GB”>The patient underwent bilateral arthroscopic hip surgery for the correction of FAI (one week apart): The abnormal, bony deformity was resected using a mechanical burr, restoring the normal contour of the acetabular rim (pincer) and femoral neck (CAM) (</span><span class=”hyperlink”><span lang=”EN-GB”>Figure 1</span></span><span lang=”EN-GB”>), a torn labrum was repaired with suture anchors and a capsular repair was performed to optimise hip stability. No complications were recorded following the procedure and a standardised rehabilitation was given to the patient to complete. </span>

<span lang=”EN-GB”>At 12 weeks’ post-surgery, the patient was symptom-free and had completed their post-surgical rehabilitation; functional performance tests were performed and demonstrated statistically significant improvement in measures for agility and hip ROM, with significant reduction in pain during all ambulatory and squatting tests. The patient returned to training and competition 13 weeks’ post-surgery. </span>

<span lang=”EN-GB”>At one-year follow-up, the functional performance tests were repeated and the patient had improved on all functional tasks, with greater acceleration, further improvements on the agility measure, increased squatting depth and increased jump height. All improvements in ROM observed at three months’ post-surgery were maintained at one year and the patient reported no pain or stiffness on any of the test measures. Scores were now comparable to a mean matched, healthy control group, demonstrating restoration of athletic performance.</span>

The benefits of regular participation in sports during adolescence and adulthood are numerous and well documented. Yet the increased focus on success with amplified training and competition schedules has the potential to cost young athletes far more than just time and effort. Injuries in sport are inherent and at times unavoidable but the worrying increase of hip-related issues among young athletes is a growing cause for concern. One of the most recognised sources of chronic hip injury in athletes is known as femoroacetabular impingement (FAI).

FAI is a motion-related disorder of the hip caused by excessive bone growth on the femoral head/neck junction (CAM impingement) or the rim of the pelvic acetabulum (pincer impingement). Although these deformities may develop in isolation, patients generally present with a combination of  both. During movement, this additional bone leads to repeated abnormal contact between the prominent acetabular rim and the abnormal femoral head/neck junction.

Over time, this will lead to degrading of the underlying soft tissue within the joint, namely the labrum and articular cartilage, and the potential to develop osteoarthritis is a major concern. This issue is extremely common among young athletic populations, especially those involved in sports that require a high level of twisting and turning movements.

The aetiology of FAI is still unclear and no doubt multifactorial in nature. Recent literature has shown that not everyone with a bony deformity will progress to symptomatic FAI, therefore contextual factors must be examined in determining why this is the case. Increased sports participation, especially during bone development, may be a risk factor for the development of bony deformities, which progress to symptomatic FAI as the athlete grows older. There is a growing body of evidence which supports this concept; a common theme emerging from the research shows athletes of 12 years of age or younger appear to be particularly at risk of developing abnormal bony hip morphology.

A study conducted at our institution (recently accepted for publication following peer review) compared athletes undergoing arthroscopic FAI surgery to an asymptomatic, matched control group, with regard to the number of weekly training hours carried out between the ages of 10-to-12 and 13-to-15 years. Our results show that the athletic patients reported engaging in more structured training in the 10-to-12 years age category compared to the healthy, athletic control group. This study highlights the potential risk high training volumes could pose for the development of FAI later in the player pathway.

Rather than deter parents from allowing their children to participate in sport, we suggest the need for increased awareness of the potential risk among coaches, physiotherapists, doctors and parents. Early hip screening and consistent monitoring of at-risk adolescent athletes will allow for earlier preventative measures to decrease the risk of developing abnormal bony morphology and later progression to symptomatic FAI.

Patients will typically present with anterior groin pain and hip stiffness during and following activity, which they describe as insidious in nature and not attributed to a traumatic event. Patients may also report an audible clicking sound emanating from the hip during movement, and upon clinical assessment, will display lower levels of hip range of motion (ROM) and a positive impingement test with pain on flexion, adduction and internal rotation (FADIR).

Radiographic assessment of the patient, which includes plain radiography and magnetic resonance arthrogram (MRA), is used to determine the shape of the femoral head/neck junction, the acetabulum and to determine labral and cartilage pathology.

Treatment options include activity modification and conservative management. Evidence to support successful outcomes using conservative treatment measures for symptomatic FAI is poor and therapy methods commonly employed are largely based on recommendations rather than objective results. However, it is generally accepted that rest, activity modification, NSAIDS and physiotherapy should be undertaken for a period of up to three months before considering surgical options.

Arthroscopic hip surgery that removes the obstructing bone and repairs the underlying tissue has been shown to improve symptoms and allow athletes to return to a pre-injury level of competition. Long-term follow-up studies have shown sustained improvements at 10 years’ post-surgery for patients with no evidence of osteoarthritis at the time of surgery. However, in the presence of established preoperative osteoarthritic changes, a poorer outcome with conversion to total hip arthroplasty is more likely.

FAI by nature does not require immediate cessation of sports participation and athletes may continue to compete, albeit at a disadvantage compared to their competitors. The effect of FAI on athletic performance had not been examined previously until a prospective research study was undertaken at Waterford Institute of Technology and UMPC Whitfield. Athletes with FAI (average age 25 years) were examined prior to arthroscopic treatment on a number of performance measures and compared to matched healthy athletes (for age, height, weight, sporting type and sporting level). All participants were assessed first for acceleration and agility capacity; both of which are essential attributes needed to perform well during field sports. Squatting depth was assessed, and a single-leg drop jump (dropping from a height of 30cm) was used to indicate lower limb power. Finally, hip ROM was assessed for flexion, abduction and internal rotation.

Three-quarters of the athletic patient group were still engaged in full training and competition schedules at the time of testing. Results indicated that the patient group was 3 per cent slower to accelerate and 8 per cent slower on the agility measure. Athletic patients also reported anterior groin pain both during the acceleration (54 per cent) and agility (62 per cent) assessments. We did not find any differences between the groups for squatting depth or in the generation of lower-limb power, however 56 per cent of patients reported groin pain while squatting. The patient group also had lower levels of ROM in all three planes compared to the healthy athletes.

These deficits in performance, as well as pain, place athletes with FAI at a considerable disadvantage compared to other competitors, which can ultimately affect team performance. Coaches should also note that discrepancies in performance are not fitness related and considerations should be made to cater for athletes with FAI in fitness programming if the athlete wishes to continue with competition. Recognition of the symptoms by coaching and medical staff working with athletes will mean implementation of treatment earlier and better outcomes.

Arthroscopic surgery has been reported throughout the literature to improve symptoms among athletic patients and an overall return-to-play rate of 74 per cent. Risk factors for poorer outcomes include patients who are older at the time of surgery, those who have evidence of osteoarthritis and those who have more severe symptoms or longer symptom duration. In relation to athletic performance, there is very little research currently published which chronicles athletic performance following intervention. Preliminary results from the prospective study mentioned above, which were presented at the International Society for Hip Arthroscopy conference proceedings in 2017, indicate that hip ROM and agility improved as early as 12 weeks, with some reductions in pain. At one year, the patient group showed improvements in agility, squatting depth, lower-limb power and sustained the improvements in hip ROM.

<h3 class=”subheadMIstyles”>FAI — key symptoms to remember</h3> <p class=”listBULLETLISTTEXTMIstyles”>Young, otherwise healthy athlete with no prior history of hip problems during childhood.

<p class=”listBULLETLISTTEXTMIstyles”>Clicking sound within the hip.