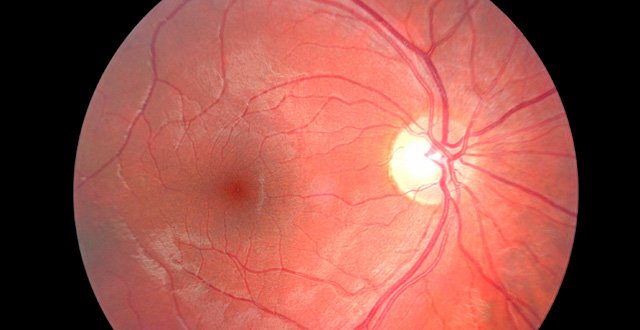 A 72-year-old man attended his GP complaining of a painless gradual fall in vision over the preceding 12 months, with the right eye becoming significantly worse in the past two weeks. The man had no past ophthalmic history apart from hyperopia (farsightedness). His medical history was significant for hypertension, which was controlled with a calcium channel blocker and he had a 40 pack-year smoking history. His GP referred him to his local ophthalmic emergency department.

On examination his Snellen visual acuity was 6/48 in the right eye and 6/18 in the left. Central vision was reduced, causing considerable difficulty with reading, however, peripheral vision was maintained. The man did not have visually significant cataract. Testing with an Amsler grid revealed marked metamorphopsia in the right eye. (<strong>See below</strong>). Dilated fundal exam revealed a haemorrhage at the right macula and atrophic changes at the left macula. Fundus fluorescein angiography (FFA) confirmed a diagnosis of neovascular (wet) AMD in the right eye and non-neovascular (dry) AMD in the left.

The man was commenced on monthly intravitreal injections of anti-VEGF agent bevacizumab into the right eye and reviewed in the medical retina clinic after his third injection. Visual acuity in the right eye improved to 6/18 with a marked reduction of intra-retinal fluid and the patient was commenced on maintenance of six- to eight-weekly injections to preserve his central vision.

Age-related macular degeneration (AMD) is the most common cause of vision loss in people over 50 in the Western world. The two main forms of AMD are neovascular and non-neovascular, or ‘wet’ and ‘dry’ AMD as they are more commonly referred to. AMD affects a patient’s central vision and therefore has a significant impact on that person’s ability to function independently, as reading and writing can become difficult to impossible.

<em>Race</em> – AMD is more common in Caucasian individuals than in those of other races.

<em>Tobacco smoking</em> – Current smokers have a two-to-three-fold increased risk of developing AMD and there is a dose-response relationship with pack-years of smoking. This is the main modifiable risk factor and can affect the patient’s response to treatment.

<em>Cardiovascular disease</em> – Hypertension has been associated with AMD in some but not in all studies.

<em>Hypermetropia</em> – positive findings in cross-sectional studies have not been confirmed by the results of larger population-based prospective studies.

<em>A healthy diet</em> – High fat intake and obesity may promote AMD, with antioxidant intake having a protective effect in some groups. Green leafy vegetables when consumed regularly confer a lower risk of AMD.

<em>Heredity</em> – The risk of AMD is up to three times higher if a first-degree relative has the disease.

The dry, non-neovascular form accounts for 90 per cent of AMD and is characterised by a gradual loss of retinal pigment epithelial (RPE) cells and photoreceptors at the macula causing a gradual worsening of central vision. The diagnosis is made by examining the macula for soft drusen, focal hyperpigmentation or geographic atrophy in the late stages and confirming a lack of fluid with the use of optical coherence tomography (OCT).

Fundus fluorescein angiography (FFA) is usually performed if there is doubt about the presence of a choroidal neovascular membrane. Unfortunately, there is no treatment available that reverses the damage caused by dry AMD. However, patients are counselled, supported with low-vision aids, advised regarding lifestyle changes such as smoking cessation and vitamin supplementation, and given an Amsler grid to allow home-monitoring for new distortion.

Patients with late AMD in one eye have a 50 per cent chance of developing advanced AMD in the fellow eye within five years. The Age-Related Eye Disease Studies (AREDS I and II) provided substantial evidence that taking high-dose antioxidant vitamins on a regular basis can decrease the risk of development of advanced AMD. Experimental surgeries such as the implantation of miniature intraocular telescopes are being trialled and may be of use in selected cases.

Wet (neovascular) AMD makes up 10-15 per cent of AMD cases and tends to develop at a faster pace. This form of AMD is characterised by the ingrowth of permeable, fragile new blood vessels from the choroid into the retinal pigment epithelial and subretinal spaces.

These new vessels, known as choroidal neovascular membranes (CNV), are thought to be stimulated by the pathological secretion of vascular endothelial growth factor (VEGF). Untreated, these new vessels bleed and eventually cause scarring of the macula and a profound loss of central visual function occurs. In the UK, CNV causes severe visual impairment or blindness in 3.5 per cent of people aged 75 years or over. Wet AMD presents with a much more acute onset of worsening central vision, metamorphopsia, and/or central scotoma.

A yellow-green plaque-like membrane or haemorrhage (as well as ipsilateral and/or contralateral drusen) is seen on dilated fundal exam. These patients should be evaluated promptly, usually with FFA, which would confirm choroidal neovascularisation. Non-invasive OCT (see <strong>Figure 3</strong>) is performed to quantify sub- and intra-retinal fluid and to monitor progress and response to treatment.

Treatment of neovascular AMD has been revolutionised in the past 15 years by the introduction of intravitreal anti-VEGF medications. The most frequently used anti-VEGF agent is the monoclonal antibody bevacizumab, which was licenced for systemic use in colorectal cancers and remains off-label for ophthalmic use. Others include ranibizumab, a humanised monoclonal antibody fragment developed specifically for ophthalmic use, and aflibercept, a recombinant fusion protein that binds to VEGF-A, VEGF-B and PlGF). Bevacizumab was shown to be equally as effective as ranibizumab for the treatment of neovascular AMD at two years in the CATT study.

Older treatments such as photodynamic therapy (PDT) are now rarely used for neovascular disease, but may be useful in cases where there is refusal of intravitreal therapy.

The UK NICE guidelines recommend: “For eyes with confirmed active wet AMD for which anti-angiogenic treatment is recommended, offer treatment as soon as possible (within 14 days of referral to the macula service).” This is a guideline supported and endorsed by the UK Royal College of Ophthalmologists.

AMD is the leading cause of sight loss in people aged over 50 years in Ireland, affecting more than 60,000 individuals (approximately 7,000 with neovascular AMD and 60,000 with non-neovascular AMD).

A recent audit of national waiting times across Irish ophthalmology departments revealed that, on average, patients are waiting 52 days from diagnosis in the clinic to first intravitreal injection. The audit also revealed that average waiting times across different ophthalmology departments ranges from 14 to 92 days. Our national ophthalmology services are under great pressure to cope with current demands for intravitreal injections for neovascular AMD and patient waiting times are stretching as a result. The number of people over the age of 65 years is predicted to increase by 4 per cent (275,000) within the next 12 years and our healthcare system will have to undergo massive investment in infrastructure and personnel to provide a safe standard of care for our patients. A decentralisation of our ophthalmic healthcare service with the delivery of care taking place in community-based settings may be beneficial to our growing number of patients.

A significant proportion of your older patients will develop AMD, and while GPs regularly test distance visual acuity, the addition of Amsler grid testing in the community setting will increase the number of patients diagnosed at an earlier stage of disease progression allowing ophthalmologists to better preserve visual function and help patients to maintain an independent lifestyle for longer.

Treatment with anti-VEGF intravitreal injections in primary eye care settings by community ophthalmic physicians or advanced nurse practitioners should be considered to enhance the delivery of sight-saving treatment in a timely manner.