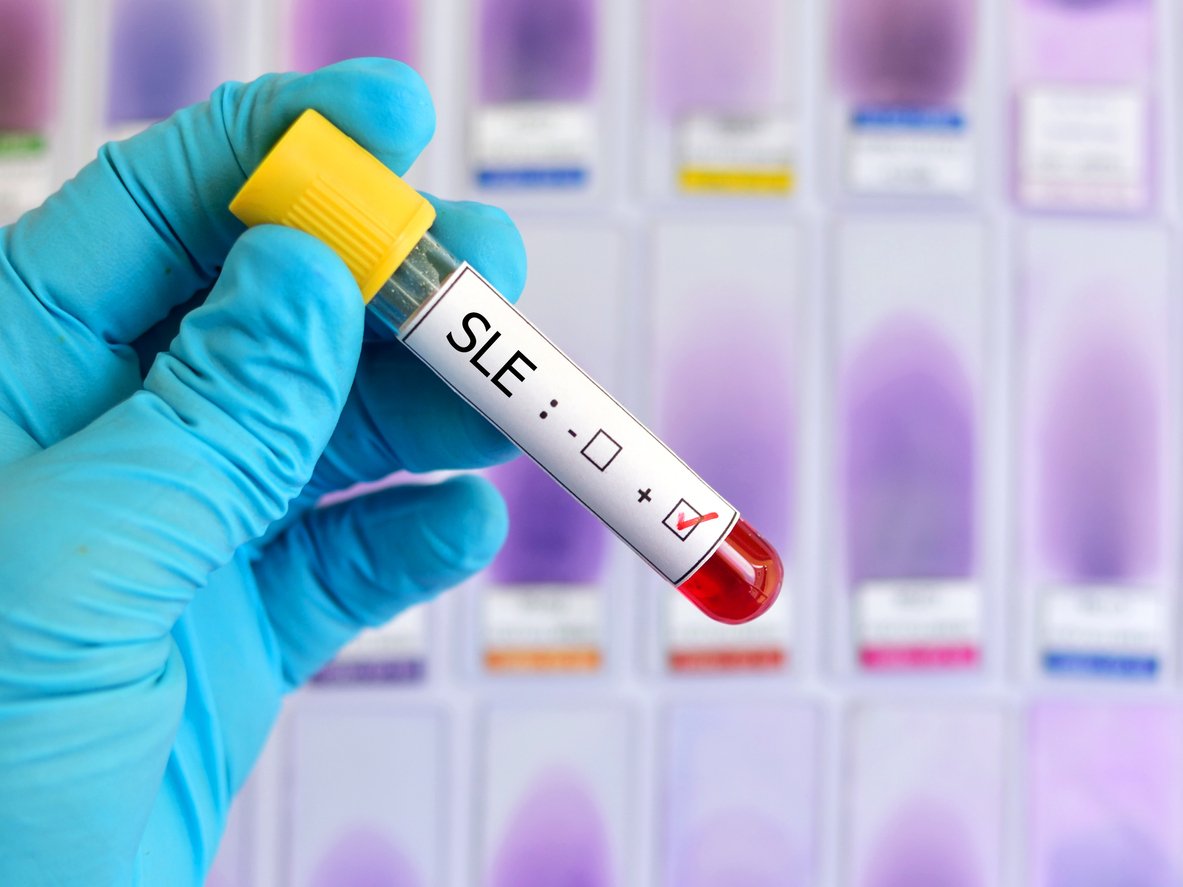 Systemic lupus erythematosus (SLE) is a multisystem autoimmune disease characterised by the presence of autoantibodies, which can cause inflammation in various organs. It is more common in women and amongst non-Caucasian populations. Although children can be affected with SLE, it is less prevalent in this population and without the gender bias seen in adults. The global prevalence of SLE is varied according to ethnicity and geography ranging from 30-150/100, 000 with incidence ranging from 2.2 to 23.1/100,000 population.

A genetic contribution to the development of SLE has been well recognised, with more than 80 genetic predispositions identified. Other factors that play a role in SLE pathogenesis include smoking, viruses such as Epstein-Barr, vitamin D deficiency, ultraviolet exposure, certain medications, environmental pollutants and epigenetic modification. Antibodies related to SLE often predate the diagnosis or symptoms for years and SLE-specific autoantibodies, such as anti-Smith
antibodies and anti-double stranded DNA, are closest to the development of overt clinical symptoms.

Diagnosing SLE may pose a challenge due to the clinical and serological diversity. There are several classification criteria for SLE. To diagnose SLE based on the Systemic Lupus International Collaborating Clinics (SLICC) 2012 criteria, the patient needs to meet four criteria with at least one clinical and at least one immunologic (autoantibodies or low complement) in the absence of biopsy-proven nephritis. However, it allows lupus nephritis to be the sole criterion in the presence of anti-dsDNA or ANA antibodies. In our case report in this article, the patient had biopsy-proven lupus nephritis along with meeting five-of-11 clinical criteria and four-of-six immunologic criteria of the SLICC criteria. The European League Against Rheumatism/American College of Rheumatology (EULAR/ACR) classification criteria are mainly used in research studies, wherein a score of 10 or more is required with an entry criterion of an ANA ≥1:80 and then a numerical weighting attributed to the other criteria.

The approach to managing SLE should be tailored to the specific organ(s) involved and general measures, which includes management of bone, reproductive, cardiovascular health, vaccinations, and the identification and management of antiphospholipid mediated disease. General considerations in management are as follows:

Patients with SLE are advised to avoid direct sunlight where possible and use high factor SPF sunscreen.

Smokers have worse outcomes and tend to be resistant to hydroxychloroquine, so smoking cessation is of particular importance.

The inactivated influenza vaccine is recommended in patients on immunosuppression.

The quadrivalent human papillomavirus (HPV) vaccine has good safety data in SLE and should be considered in female patients aged 11-to-26 years.

Covid-19 vaccinations have not been specifically examined in SLE, but similar to other autoimmune diseases we recommend that patients proceed with vaccination unless a contraindication such as anaphylaxis exists. There may be some merit in holding some immunosuppressive therapies (such as methotrexate) for a short period of time to facilitate antibody response, but this is yet to be formally recommended.

It is important for women of child-bearing age to discuss contraception and have planned pregnancies, which
often require a multidisciplinary approach.

Hydroxychloroquine, which works as an immunomodulator, has been one of the most important treatments for patients with SLE. Not only does it improve survival, it augments the effect of mycophenolate mofetil and also has antithrombotic properties. It is the first-line treatment for both cutaneous and arthritis manifestation of SLE. Many studies have also demonstrated the efficacy of hydroxychloroquine in improving pregnancy outcomes and reducing the risk of congenital heart block associated with anti-Ro antibody. The prescribed dose of hydroxychloroquine should be based on body weight of 5-to-6.5mg/kg or a maximum of 400mg once daily. Hydroxychloroquine has very little side-effects, but an uncommon major long-term side-effect of retinal toxicity needs to be addressed by enrolling patients for routine monitoring using imaging devices such as optical coherence tomography (OCT). Duration of therapy, higher doses (per body weight), underlying retinal disease, tamoxifen and chronic renal disease are the risk factors associated with retinal toxicity in hydroxychloroquine use. Chloroquine, although is associated with higher incidence of retinal toxicity, is an alternative for those who are intolerant or allergic to hydroxychloroquine.

Lupus nephritis occurs in up to 60 per cent of SLE patients, is most marked in non-Caucasians and is a negative prognosticator. It is suspected based on abnormalities on urinalysis in its early stages. The spot urine protein to creatinine ratio is usually more than 0.5grams and the diagnosis should be confirmed by renal biopsy unless a contraindication exists. Renal biopsy excludes other causes of proteinuria and allows us to grade and stage the nephritis; crucial information in managing these patients.

For induction of treatment, intravenous methylprednisolone is recommended followed by a high-dose corticosteroid taper. Mycophenolate mofetil (MMF) or cyclophosphamide remains the first-line induction therapy. This is followed by a maintenance therapy with either MMF or azathioprine. An alternative induction agent can be switched to if a patient fails to response to initial treatment (see Table 1).

Hydroxychloroquine is usually the first-line therapy. Joint flares often settle with a short course of corticosteroid. Other therapies such as methotrexate or azathioprine can be added for those with ongoing SLE-related synovitis. Biologics including rituximab and belimumab have been proven to be beneficial. Anti TNF-alpha inhibitors are usually avoided as they can potentially cause drug-induced lupus but in overlap syndromes in particular they can be useful.

The use of high SPF sun screen and sun avoidance is necessary to prevent flares. Hydroxychloroquine is helpful in treating cutaneous lupus apart from supportive topical therapies including topical corticosteroids and tacrolimus. Discoid lupus, especially of the scalp, is often treated with intra-lesional steroid injections. Methotrexate is a good immunosuppressive for cutaneous disease. For disease refractory to antimalarials, MMF and azathioprine are effective therapies. In very resistant cutaneous disease, thalidomide and lenalidomide can be considered, but with caution, as they are various potential toxicities. Several clinical trials involving belimumab have shown efficacy in treating cutaneous disease.

The predictors of progression in organ damage include age at diagnosis, race/ethnicity and socioeconomic status. Non-Caucasians, especially African-Americans, are at a greater risk of poor outcomes, which can be confounded by other variables such as income and the presence of hypertension. Other features include time of onset to diagnosis, high disease activity score, renal and severe organ involvement, which are potential contributory factors for mortality and the development of lupus-related damage.

Undoubtedly, the wider use of simple drugs such as hydroxychloroquine has improved the prognosis of SLE in addition to the newer immunosuppressive therapies over the past few decades. On the other hand, risk reduction in thrombotic episodes has been noted in antiphospholipid antibodies-positive SLE patients using low-dose aspirin with anticoagulation, with warfarin remaining the therapy for those with a diagnosis of antiphospholipid antibody syndrome.

The overall mortality in SLE patients remains elevated and is up to 2.6-fold higher than the general population standardised by age and sex. However, this vastly improved between the 1950s and 1990s where five-year and 10-year survival rates increased from 74.8 per cent to 94.8 per cent and 63.2 per cent to 91.4 per cent, respectively, before it plateaued. A study reported the five-, 10-, and 15-year survival rates in adult patients with SLE as 0.92, 0.85 and 0.79, respectively, in low/middle-income countries as compared to 0.95, 0.89, and 0.82, respectively, in high-income countries between 2008 and 2016. The main causes of death in patients with SLE are disease activity, chronic renal failure, cardiovascular disease, and infections.

Corticosteroids have the potential to impair the immune system response towards many infectious agents, which makes patients more susceptible to infections. Moreover, high doses of corticosteroids cause weight gain, hypertension, and diabetes, which are significant cardiovascular risk factors. The damage contributed by prednisolone increases over time with the highest burden of damage at 15 years. Thus, it is of utmost importance to develop targeted management strategies to minimise prednisolone exposure. Belimumab was the first agent licenced for use in SLE in the past 50 years, with benefits seen for cutaneous, renal and articular disease, and in particular it has a role in minimising corticosteroid exposure and the associated damage. Unfortunately, this is not yet available to public patients in Ireland.

SLE is a multisystem inflammatory condition, which presents in a myriad of ways and is characterised by the presence of antibodies with evidence of immune dysfunction. Diagnosis can be challenging, but we are guided by specific classification tools. Hydroxychloroquine is the foundation stone of pharmacotherapy in SLE, and is well-tolerated with a multitude of benefits. Monitoring for ocular toxicity is important. For more specific organ involvement, such as nephritis, immunosuppressives in the form of either MMF or cyclophosphamide remain the mainstay of therapy. Other more targeted therapies are being developed, but it remains a challenge for patients in Ireland that belimumab is still unavailable to them.