Lilly of the kitchen garden 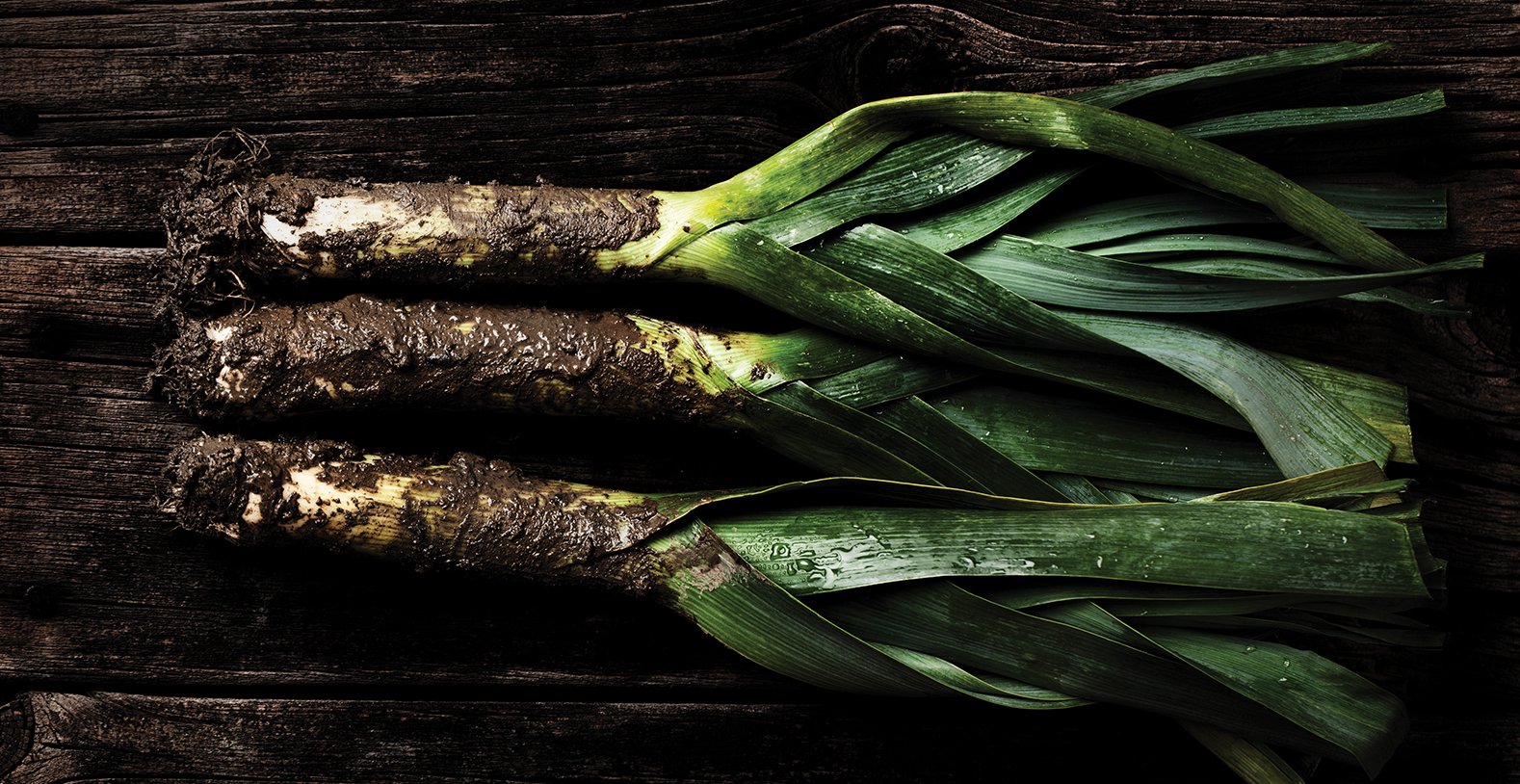 Leek stalks on dark wooden board.-Click on the banners to browse portfolio by collections-

Packed with goodness and flavour and containing virtually no carbohydrates, there is nothing not to admire or like about leeks

Wherever possible, I like to eat vegetables that have ‘welly metres’, rather than air miles. This I manage, at least some of the time, by having a vegetable garden of raised beds and a rather elderly, but large, polytunnel on a south-facing slope above the River Bride in north-east Co Cork.

Lest I sound unbearably greener than thou, I should add that – especially at this time of the year – I do buy peppers that have been grown in Spain and even an occasional French bean that first saw the light of day in, say, Kenya. I draw the line at Guatemala, although the farmers there have a right to make a living too.

Having the polytunnel, I should be self-sufficient in salad crops for probably nine months of the year, but after all this time I have yet to perfect my timing. Lettuce, for me, is either famine or feast; and just now I have winter lettuce seedlings ready to be planted out and I just know that they will all bulk up around March of next year and I’ll be back making lettuce soup.

The ‘good life’ has never been easy. But some vegetables are easier than others.

Like many gardeners, I first grew leeks not because I was particularly keen on them, but because they are supposed to be very undemanding. And also, to be honest, because they look so abundant and bountiful and all those things with which your first attempt at vegetable growing is supposed to bless you. Just now, the first ones I planted out, in mid-summer, are putting on exactly that kind of show. And, to be honest, anything that looks bountiful in early winter gets my vote.

When leeks are little thicker than pencils, they can be wrapped in Parma ham, blanketed in bechamel sauce, topped with Parmesan and baked. They can also be simply steamed and served cold with a tangy mustardy vinaigrette and some hardboiled egg grated on top. The French call this “poor man’s asparagus” but, to be honest, there’s no sense of deprivation or of second best about it.

There are several important things to know about leeks. Firstly, they are exceptionally easy to grow, tolerant of a wide variety of conditions, rudely healthy most of the time and so hardy that they thrive even when the soil is frozen rock solid and they are impossible to liberate for the pot.

Secondly, people are a bit snobbish about leeks. Onions are vaguely respectable, but the poor old leek is a bit coarse and vulgar.

Thirdly, and this is a blessing for some gardeners, slugs and snails tend to turn up their noses at leeks and will prefer to eat virtually anything else within slithering distance.

Leeks are also packed with goodness and flavour and contain virtually no carbs. There is nothing not to admire or to like about this lily of the kitchen garden. And if you let your leeks go to seed in their second year, you will be rewarded with beautiful globular flower heads of the sort for which people pay good money to have in the flower border.

You can start to plan your leek experience now. If you want slender ones, try King Richard. Thicker, stouter ones include Musselburgh, while the likes of Autumn Mammoth look as if they would fail a drugs test.

Sow your leeks very thinly in early spring. I tend to sow mine a few days before I tackle the planting of the early spuds, which tends to be, in keeping with Irish tradition, on St Patrick’s Day. Of course, the leeks won’t remain where you sow them, so you need not worry about the space between rows if you have more than two.

By June you will have dozens of baby leek plants, which you can now transplant to their permanent home; permanent in the sense of where they will grow to edible size at any rate. But there’s no need to rush as you can delay transplanting until as late as early August.

The ideal place for leeks is in the bed recently vacated by your early potatoes, if you’re lucky enough to have had them; they will benefit from the manure, which will have gone in with the spuds. Just rake over the soil, firm it by treading and rake again.

When the time comes for planting out your leek seedlings, you will need to take a dibber – a blunt instrument with which you can make a suitably shaped hole (or you can improvise with the handle of a rake) – and push it into the soil to a depth of about six inches. Repeat this every eight inches, leaving 18 inches or so between the rows. Narrower spacing will mean smaller leeks, which are not always a bad thing. (I use the metric system for everything other than gardening, for some reason).

Give your leek seedlings a good soaking with the watering-can a couple of hours before you lift them with a fork. Then very gently tease them apart and keep them moist, especially if it’s a warm day. Pinch off any straggling roots and drop a leek plant into each hole. Don’t fill it in, however; the leek will need the space. Simply fill each hole with water and the leeks will settle into place, the water washing just enough soil down to their bases to provide a snug anchorage.

After that, you just watch them grow.  They will be ready from late October if you like them small and will continue to grow through the winter until you dig the last of them the following March.

Wine of the week

While leeks will be happy in the company of a wide variety of wines, red and white, they go very well, in my experience, with a German Riesling. However, in these darker days of the year I think we all enjoy the more robust forms of bottled sunshine, the kind of thing that goes so well with steaming casseroles. Just now there is great value to be had in Marques de Griñon Rioja Crianza (€10, O’Brien’s) after it has had a whopping €6.95 knocked off. Ripe fruit, strawberryish, round tannins, a decent seasoning of oak. You know the drill.