The Forester: As safe as houses 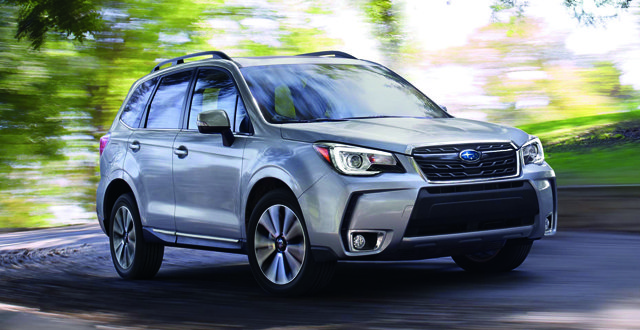 Some cars are over built, some cars are poorly built, but the Subaru Forester, like Goldilocks’s porridge, is just right. Subaru has a legacy of building cars that are indestructible and this Forester definitely maintains its family’s bulletproof bloodline. This car feels like it will go on forever, like a trusty workhorse. However, in terms of luxury and style, especially inside the cabin, it feels reminiscent of a commercial vehicle, which I suppose adds to that hard-wearing sense you get from it. The Forester is the vehicular equivalent of a good pair of boots; you’ll have them forever and go anywhere in them, but if you’re trying to look dapper you may end up a little embarrassed.

Many European carmakers have a tendency to overbuild their vehicles to the point where they feel as though they could storm the dunes in Afghanistan’s Helmand province, however, very few have the off-road credentials to back it up. This isn’t the case with the Forester. The 190lb of torque thrown out of the 2.0 litre petrol model I was driving felt like it was enough to interfere with the rotation of the earth, albeit a little jerky when driving around the city and I struggle to imagine what the 350lb offered by the diesel version could do. I remember a time when the Subaru Forester was a butch-looking estate car, but those days are long gone as this station wagon-turned-SUV has the necessary off-road pluck to bloody the nose of any of its rivals.

The Forester is loaded with X-Mode, an unmissable button behind the gear selector, which initiates an off-roading system that optimises the transmission, brakes and dynamic control system, helping to reduce potential wheel slip on slippery surfaces, climbing steep inclines, and navigating rough roads. Further bolstering the Forester’s utilitarian persona is its permanent symmetrical all-wheel drive system and the position of its unstoppable Boxer engine, which has a flatter profile and sits lover in the chassis, making the vehicle more stable-balanced and resistant to side-to-side motion.

In terms of safety, the Forester has a five-star Euro NCAP rating and a range of features to keep you and your loved ones safe. There is a ring-shaped reinforcement frame in the vehicle, which strengthens the passenger cabin’s roof, doors, pillars and floor, which helps to divert and dissipate impact energy away from the occupants. Due to the aforementioned low Boxer engine, the Forrester’s motor is positioned to absorb the energy of an impact and is also mounted to a structure that is designed to collapse in the event of a collision.

The main aspect of this car, which Subaru are chomping at the bit to shout about, is the EyeSight system, which uses two stereo cameras mounted at either side of the rear-view mirror to monitor the road ahead for potential hazards, up to 110 meters away. The cameras will detect objects in their view and control the vehicle to respond accordingly, helping to avoid accidents and reduce driver fatigue.  EyeSight is utilised by the adaptive cruise control, which has a pre-collision braking system that alerts the driver to a possible collision before taking emergency action by applying the brakes.  This system will detect objects in front of the driver and limit the engine output with its pre-collision throttle management system. It will also alert the driver with alarms and visual messages if they are staying out of the lane or if they remain stationary when the vehicle in front of them has moved.

So, to sum up, the Forester is built like a long-lasting commercial vehicle, goes like stink and is as safe as houses.

In Ireland, buyers can chose from two 2.0 litre, four cylinder engines, a 150bhp petrol or a 147bhp 2.0 diesel motor. I had the petrol version, which gets 40.9mpg, less than its diesel counterpart at 49.6mpg. The road tax for the Forrester is €390 for the petrol or €570 for the diesel version. A six-speed manual gearbox is only fitted on the diesel models, which wouldn’t be my preference in this vehicle, as the Lineartronic CVT automatic transmission is a terrific piece of engineering.

The Forester also comes with an extended five-year, 160,000km warranty.