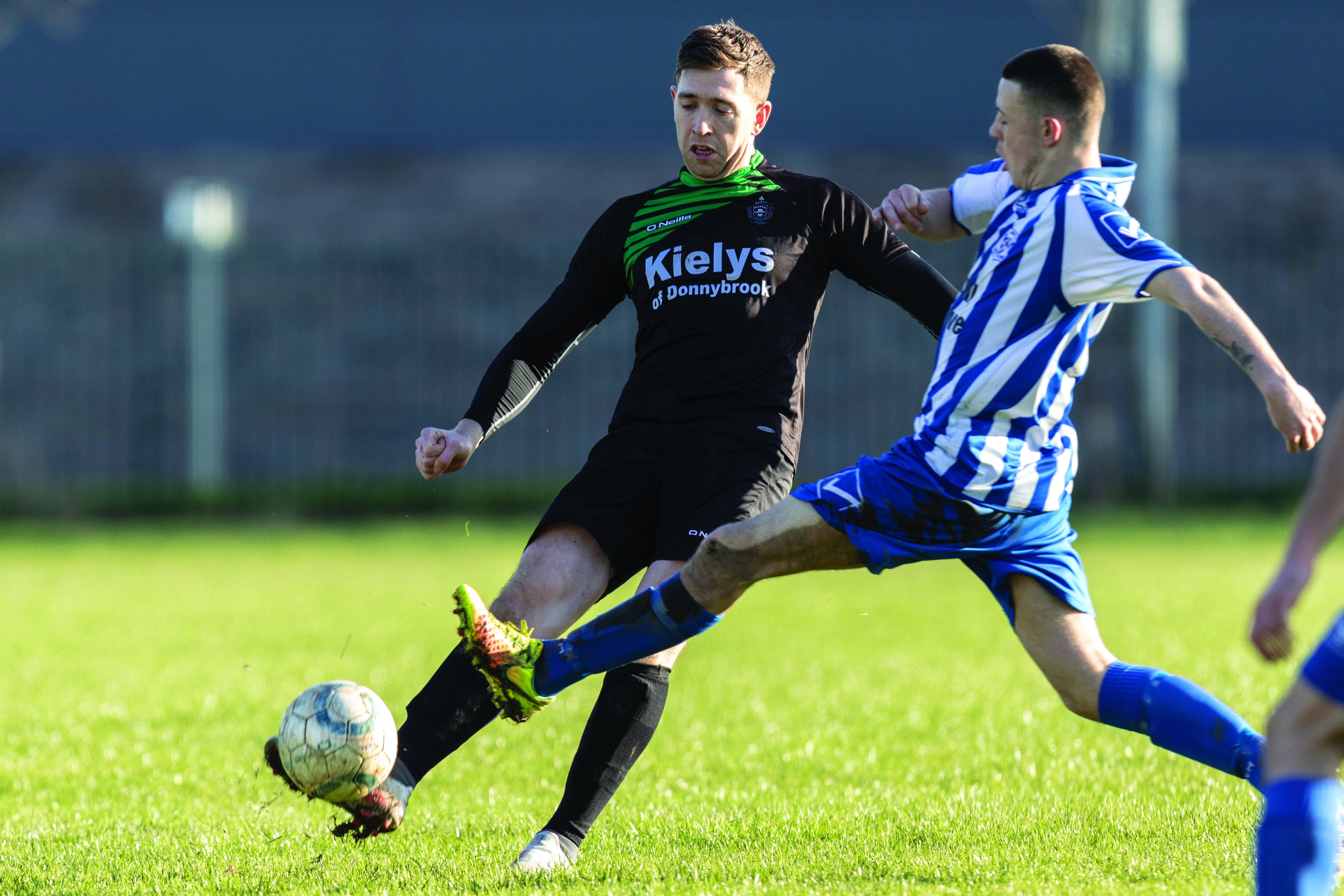 St Vincent’s showed strength of character in fighting back from an early deficit to claim all three points in a keenly contested affair. John Cosgrove scored twice, while Fionn Nally converted a close range strike. Aside from a rusty opening spell, Vincent’s were the stronger team and got the New Year off to a perfect start.

Vincent’s elected to kick-off against the wind on a typically blustery evening at St Benildas. Unusually, St Vincent’s tend to perform better with the wind in their face. In these circumstances, opponents typically push higher, leaving more room in behind for the pacy front trio to work with, and struggle to keep passes from running harmlessly through to the goalkeeper. Teams playing with the wind expect to have a lead going into half-time, and it can be a significant psychological blow if events do not unfold as planned.

That being said, the visitors started brightly and deservedly took the lead on the half hour mark. A flying winger danced in from the right past a few tackles, before crossing dangerously from the end-line. A goalmouth scramble ended with the ball bundled in from close range. 0-1. Vincent’s began to look more comfortable at the back and assert themselves in midfield. Following a couple of half-chances, the breakthrough came off a swift counter on the stroke of half-time. Brian Kelly won the ball, and played an incisive sideline pass to Eddy Wrynn. Eddy split the centre-half pair with a perfectly weighted through ball to give Rory Durand a clear run on goal. Rory rounded the keeper, who hacked him down inside the area. It was an easy penalty decision for the referee, and the keeper was lucky to escape with only a yellow. John Cosgrove converted to make it 1-1.

Buoyed by the equaliser, Vincent’s charged out of the blocks to start the second half. Aidan McGrath carved out a number of openings, and was unlucky not to hit the back of the net. As pressure mounted, Lucan eventually cracked after conceding a succession of corners. Lucan failed to deal with an in swinger, and the ball fell to Fionn Nally who made no mistake by smashing it into the roof of the net. 2-1. Lucan responded well and dragged themselves back into it.

Andy Delany, along with the rest of the defense, was in inspired form, thwarting whatever Lucan had to offer. As the away side pushed higher and higher in search of an equaliser, they left themselves open on the counter. Vincent’s added a third when Barra Neary and Fionn Lynch combined to create an opening for John, and the in-form midfielder rifled home from the edge of the area.

The game ended on a comical note. Barra was played clean through on goal with no defender on the horizon, only for the referee to call the game to a close. Barra maintains the fourth goal was a formality, but the rest of us are not so sure.

3-1 the final result. Vincent’s were excellent value for the win, and the margin of victory could have been greater. The team were delighted to kick-off 2019 with a win and will use this game as a platform to build off. An unquestionably talented side, consistent performances such as this one will undoubtedly see the team move up the table.

Andy Delany was fantastic at the heart of St Vincent’s defence. The club captain turned the phrase “lead from the front” on its head to drive the team to a deserved win. He blends expert positioning, anticipation, pace and competitiveness to ruin an opponent outing. Lucan’s threatening strikers, who caused repeated headaches in the reverse fixture, were effectively bottled up.

In addition, Andy played the David Luiz role to aplomb, sweeping forward with the ball and consistently finding teammates with accurate passes. Undoubtedly one of the best players in the division, at a range of positions across the back or midfield, the club cornerstone will be relied upon to deliver more performances such as this as the season goes on.

St Vincent’s produced a fine display of attacking football to record a comprehensive win over Ringsend Rovers in the Tom Carroll cup. Goals from John Cosgrove, Aidan McGrath, Eddy Wrynn and Fionn Lynch put the home side four goals ahead, before a late consolation. Vincent’s move on to the quarter-final stage, marking one of the longest cup runs in years.

On another evening adversely affected by the elements, Vincent’s elected to kick off against a stiff breeze. The hosts weathered a sloppy opening spell before eventually taking ownership of the game. Ringsend put themselves in a number of dangerous positions in the initial stages, but never looked like fashioning a clear opening. Their best effort came from a dipping 25-yard free kick that was only stopped by a fantastic save by Ronan McDermott, who tipped over the bar at full stretch.

The opening goal came out of the blue. A cross to the far post held in the wind, allowing Fionn Nally steal in front of his ball-watching marker. In panic, the defender flung himself at the ball and clearly handled to concede a penalty. John Cosgrove dutifully dispatched to make it 1-0. Ringsend’s defience struggled to cope with pace of St Vincent’s attack. Aidan McGrath made it 2-0 when he blazed down the right past a few defenders, rounded the keeper, and finished from an acute angle. In full flow, Vincent’s made it 3-0 shortly before half-time. Gav Kane laid off for Eddy Wrynn, who took one touch before curling into the top corner from the edge of the area.

With a big lead and wind behind them, the second period was a formality. Rory Durand and Peter Kelly dominated possession, and the back four of Darren McMahon, Dan Hales, Andy Delany and Kieran Keane looked calm and composed when Ringsend did find themselves in attacking areas. Fionn Lynch completed the rout with the goal of the night. Picking the ball up inside his own half, Fionn dribbled past a host of midfielders, nutmegged at least two defenders, and stabbed past the keeper from close range. A goal of genuine class to make it 4-0. Ringsend kept going, and claimed a late consolation to make the final score 4-1.

Overall, it was a fantastic team performance to seal passage into the quarter-finals. The only blemish on the night was an injury to Aidan McGrath, and we hope the club’s all-time top goalscorer makes a speedy recovery. This was also Fionn Nally’s last appearance before his move to Australia, and the dynamic winger will be sorely missed.

Rory Durand produced an all-round midfield performance to lead the team to victory. Blending pace, power and not a small amount of skill, Rory is a tireless competitor who lifts everyone around him. He helps control the midfield area, and is never one to shirk his defensive responsibilities. Despite not getting his name on the score-sheet, Rory’s contribution to all phases of the game amounted to a man of the match performance.

The team returns to league action with an away trip to Verona FC on Saturday 2 February. One of the strongest sides in the division, the home team is flying high and are in a wonderful vein of form. Vincent’s will need to produce a top performance to get a result.

The annual table quiz will take place on Thursday 21 March at The Dropping Well pub. A great evenings entertainment, the club would like to invite all quiz enthusiasts to come along and support the club. Non-enthusiasts are also welcome.

Training continues every Wednesday evening from 20:15 to 21:45 at St Kilians’s German school until late March, and we are always looking for new faces to get involved.