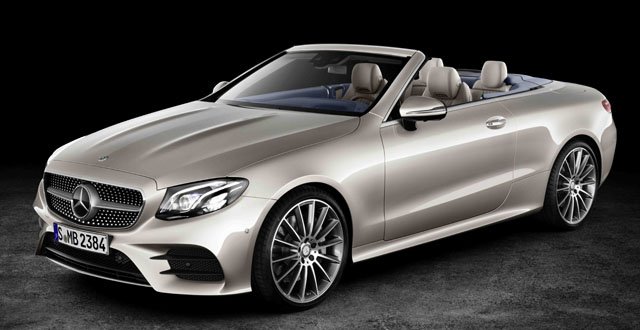 It might have seemed odd to test-drive a Mercedes Cabriolet – a convertible – in the middle of the coldest few weeks of the year. But I have consoled myself with the belief that I now know the car is warm, waterproof and very quiet with the hood up.

Did I mention it was warm? I remember telling people what I was getting and they said “make sure it has seat heaters”. Not alone does it have lovely seat heaters, it also has for all intents and purposes, a hair dryer blowing heat from the underside of the head rest. This is Mercedes’s famous ‘airscarf’, which blows heat at your neck to allow some warmth into the bones as you drive in Irish weather.

This will not be a car registering high on the sales charts. There has been an E-class convertible for many generations, no doubt more popular in Europe than in Ireland. Indeed, Mercedes offer more of their models as convertibles than any other manufacturer. The previous E-class Cabrio model was based on the C-class, but this is based on the current E-class chassis. Although one of the longest cars on the market available as a soft top (there’s an S-class convertible coming too) you’d be forgiven for thinking that it would suffer chassis flex and noises. But hang on, this is a Mercedes and it is made tight.

Despite driving around twisty roads, all at the legal limit, there wasn’t a squeak from the car anywhere. I have driven cars from ‘sports’ manufacturers within the last 20 years that had very obvious flexing, but with the changes in metal technology and car design this is now a thing of the past.

Suspension is firm, but comfortable. There is a button that can make it firmer if you like, up to sport and sports plus. It also sharpens up throttle response and steering feel. Whatever setting you may use, handling is neat. I know “it’s no BMW or Audi” in the handling department, but it can be pushed into a nice gentle four-wheel drift at the limit of adhesion. I learned to drive in cars that not alone didn’t have electric windows, they didn’t have power steering, and they felt so very communicatve compared to modern power steering units. The feedback is not wonderful, yet you can work out what’s going on from the seat of your very comfortable pants.

Although based on the current E-class Saloon, the rear seats are not Saloon proportioned, nor is the boot. Allowances do have to be made for the hood and its operating mechanism.

The new 220 engine is lovely. It is significantly quieter than the 200 unit in the family sedan I use for comparison purposes only. It also has a significant difference in bhp, now rated at 191 bhp with torque at 400Nm (that’s a lot). Despite this, tax is €270 pa. Gearbox is a nine-speed affair, which is all the better for economy. But you’ll need to be up at motorway speeds before the ninth gear manages to kick in. My fuel consumption for the week was 7.7 l/100k, or about 36mpg. I’m sure others will achieve more, but most people should not get less than me. The E-class Cabriolet is priced from €56,995, but you can pay upwards of €84,000 and more if you wish

Sometimes I’m asked if I would buy a car on evidence of quality in a test car and the answer is no, I’m not looking for a convertible. But, I’d buy a Mercedes with that engine and gearbox combination. However, if I were to allow my wife to answer that question over the week we were with the car, her answer changed from mine to “I wonder what this is now worth? I’d be interested.”