The art of the Arteon 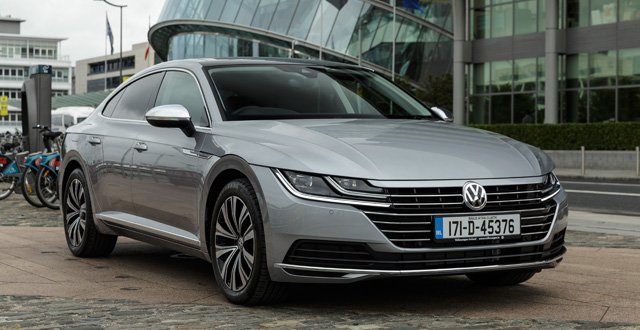 I get great information when asking patients about their lives and their cars. I have several mechanics whose consultations always start with news from the car world. Last year, a salesman presented whose main work was for a garage retailing British imports. I asked him what was selling and what was not. I remember distinctly him telling me that they could not get their hands on enough Passat CCs. For those of you who don’t know, these are the ‘four-door coupé’ of the Volkswagen (VW) Passat.

Now, a four-door coupe is a bit of a mismatch as coupés should always be two-door. But we live in an odd world when we have SUVs that are allegedly sports cars (see BMW X4, X6 and Porsche Cayenne). I really don’t feel that sporty SUVs work, as the centre of gravity is too high, but I do feel the four-door coupé works and the BMW 6 series is, I think, one of the best-looking cars out there presently.

I remember as we were looking for a family car being quite impressed by the Passat CC, but it has only two rear seats, despite being very spacious. It was very well finished, with a lot of ‘toys’ to play with. Now, the CC is no more, and the marketing people would have us believe that the Passat CC is not being replaced. But now we have the Arteon, which looks like a Passat, but is prettier.

Before I got it, I Googled it. I got on a few UK websites and I thought ‘this is going to be a powerful car’. In the UK, they are talking about 240 and 280bhp versions, whereas ours are expected to be predominantly 150bhp diesel (don’t worry, the others are still available to us). No wonder the UK imports are popular.

Never mind, it is great car to look at. When it was parked outside the surgery, various patients thought it was a Lexus or Mercedes. Very few mentioned VW and nobody thought of Skoda. The roofline is lowered, as is the driving position, and the window line is higher compared to the Passat saloon. The wheel base is longer and the track is wider, which makes it more spacious inside. The boot is a lift-back. It could easily take my bike with the seats folded, and with room to spare. And that was with both wheels still on the bike. The wheel base is about two inches longer than the Passat, which gives extra knee room for rear passengers. Incidentally, they have their own heated seats.

Safety is well thought-out, with a brilliant cruise control. It will react quickly to the car in front. I drove almost all the way home from Dublin, only touching the brakes twice, and each time for corners. The rest of the time it reacted to the car in front, even bringing the Arteon to a stop. A quick touch of the throttle was all that was needed to get going again.

How it saw the speed limit signs was beyond me.  When I just about became aware of a sign in the distance, the designated limit appeared on the dash and it adjusted the cruise control speed to match. This is simply brilliant as a cruise control, especially in bumper-to-bumper traffic.  Even as I reversed towards a closed garage door, it forcibly applied the brakes when I was within 12 inches of striking the door.

Funnily enough, I had the Arteon while we had snow. At one stage the temperature was zero degree Celsius. I was heading down a narrow, twisty, R-rated road. Wipers were on. I set ‘resume’ on the cruise control. There are so many safety features on the Arteon, I expected the car to say ‘ah, here!’

LED headlights are standard and these adjust quickly to oncoming cars and other lights. They even anticipate bends and throw light into the corner. Also standard is lane guidance. However, markings have to be good, as I found it worked well on the M2 but not so well on the N2. It does point to the future in terms of collision avoidance and many accidents may well have been prevented had the vehicles been fitted with a system such as this.

Driving it is refined. Despite having 19-inch wheels, it does feel comfortable. My wife described the suspension as ‘firm’, but I would describe it as ‘German comfort’; ‘French comfort’ would be softer.  In saying that, the body control is good, with natural understeer, which balances nicely when coming off the throttle. Fuel consumption for me was a reasonable 7l/100km, or about 40mpg overall.

In summary, it is a luxuriously-specced, safe, stylish and spacious car. It is pitched against the likes of the Audi A5 and BMW 4 series. If the Arteon had a more premium badge, it would definitely cost extra.