Something for the weekend 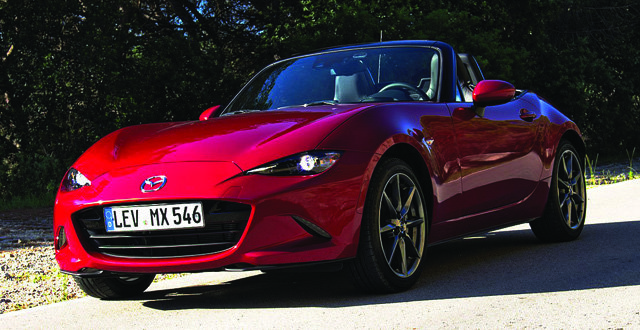 Occasionally I’m asked for my opinion on weekend cars. Or, to paraphrase Robin Williams, “God’s way of saying you’ve too much money.”

And like a typical Irishman I always answer the question with another, asking “what are you looking for”?

Usually men are looking for some sort of topless model. The best value is often the Mazda MX-5. Once the car is well looked after it should be relatively reliable. Bulletproof is the name often applied to a well-serviced MX-5 engine, once nobody has tried to tune it up. Over the years I’ve driven several models and, although the speed will never break records, its handling will always bring a smile to your face. It is one of the smoothest and most predictable handling cars you will get your hands on. And I could get a bike in the boot. I couldn’t close the boot, but the bike was in.

They have been built from 1989 onwards and are approaching the magic 30-year mark so they can qualify for vintage tax and insurance. They also have the world record for the best selling two seater sports car in history, no doubt helped by that 30-year production run.

At the time of its launch the Japanese manufacturers were accused of shamelessly copying the British cars, such as the Triumph Spitfire, MGBs and the Lotus Elan. They still haven’t apologised.

At the other end of the Japanese spectrum is the Honda S2000. More than a bit faster than the MX-5, the S2000 was Honda’s present to itself for making it to 50 years old. It is named after its engine capacity of 2000 cc, but it produces about 235 bhp with the help of the VTEC (Variable Valve Timing and Lift Electronic Control) system. Honda says there have been no warranty claims on the VTEC engine because of its reliability. No engine runs on fresh air, but if maintained properly they will be reliable. Being a front-engine rear-wheel drive means not a lot of weight over the rear wheels when the power comes. I’ve know a driver to spin the rear wheels at 90mph in the wet in an S2000. That’s OK if you’re on a circuit and know what you’re doing, but not okay on a public road.

Of course there is a wide-selection of old English cars to choose from, such as the aforementioned models. Prices are dependant purely on the condition of the car and the tint of spectacles worn by the observer. They are not my cup of tea, but they are easy to work on and parts are usually readily available for a reasonable sum. Just become familiar with doing the work yourself, which is often part of the fun for many.

Lotus is still on the go, and have made vast changes to their manufacturing since the old days. Nobody really knows where the name Lotus came from and one of the theories was that Colin Chapman, the founder, tried to sell his first car at auction. It was returned to him labelled ‘Lot unsold’, or ‘Lot us’ for short. Older models are now rising in value. Apart from the M100, the modern front-wheel drive Lotus Elan is the company’s first and only front-wheel drive car, with a 150bhp Isuzu engine. Only available with a soft top it had a habit of opening at about 100mph. Below that speed and you’ll still have fun. And in relative terms this is the undervalued model.

Which brings me to the Germans. Mercedes have been making SLs for years and many are still going. There are many clean examples in the UK. The one advantage is that if you hit a wall, chances are the wall will come off worse. And there are things in the back which some people might actually call seats. Handling is best described as forget it. They are too big and slowly responsive to be thrown around a track. The newer models are better, but still not an MX-5. But they will travel across countries in supreme comfort. In production since 1954, their value seems to follow an inverted parabolic curve, sinking to a certain level at about year 12-15 and as they approach the magic 30-year mark they start to increase again, provided they are not fit for a scrap yard. Currently a nearby garage has a 1967 Pagoda SL for sale at €99,000, and that’s a left-hand drive.

For my next article I will deal with some more Germans. More specifically the Porsche family.