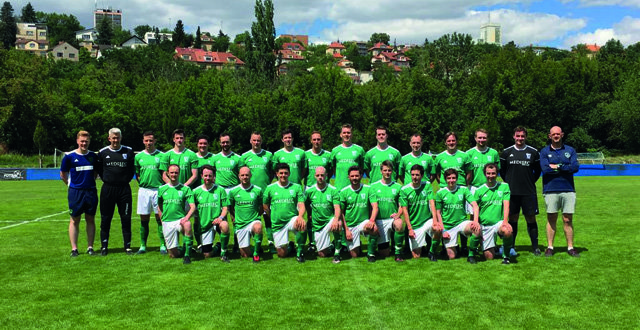 Following an enjoyable opening ceremony, the groups were drawn and in the Morell Cup, the first game was to be against the old rivals, Great Britain.  Ireland were on top in the first half, with most of the possession and creativity. However, they found themselves 2-0 down at half time due to fantastic goal-scoring initiative from the British. Attempting to get something out of the fixture, Ireland pushed forward, but were left exposed at the back and conceded two further goals and went on to lose 4-0 to the eventual tournament winners.

Dusting themselves down, Ireland bounced back with a convincing 2-0 victory over Lithuania, with goals from Dr Rory Durand and Dr Aidan McGrath and a fantastic performance from eventual player of the tournament, Dr Peter Kelly.

It was all to play for going into the final game against Hungary. Ireland needed a win to get through to the knockout stages, which they haven’t reached since Barcelona in 2016. A physical and tightly-fought battle was level with just a few minutes remaining. Again pushing for the win, Ireland were undone by a swift counter-attacking display and lost 1-0. It wasn’t to be Ireland’s year. After a day’s rest, Ireland would go on to have victories over Canada and South Korea, lose out to Russia and finish in 18th place.

Drama was to unfold in the later stages of the tournament, as suspicion was raised about the eligibility of certain players from the Russian and Hungarian teams.  The unique rules of the tournament mean that all players are to supply tournament organisers with evidence of medical qualifications, which is also tested pitchside, when players are nominated by opposing teams to answer medical questions based on their specialty. Having deemed to have fielded ineligible players, Russia and Hungary were disqualified. The teams will have felt wronged and have a point to prove at next year’s tournament. Training for next year’s event will begin after the summer and as always, we are looking to expand the squad with new players.

In the Vogel Cup, Ireland had a one of the smallest squads, meaning they would have to work harder than any other nation for a gruelling nine games in six days. A difficult first day was to be in store, with back-to-back games against strong British and Lithuanian teams ending in agonising defeat. The first points were on the board in game day two following a draw with Ukraine. However, with little break and the inevitable emergence of injuries, a hard-fought game went the way of the Germans.  At this stage, it was playing for pride and Ireland did just that, putting two past a strong Mexican team. With depleted numbers, Ireland managed huge wins against Austria and Brazil to round-off a heroic week for the Masters.

Off the field, Ireland impressed at the congress, with Dr Nathan Wall, currently working with the Shamrock Rovers academy, discussing osteochondritis dissecans.  Dr Gavin Keane delighted the audience with a literature review and original research into the penalty shoot-out!

Anyone who wishes to join the team, please contact us on irishmedicalfootball@gmail.com.